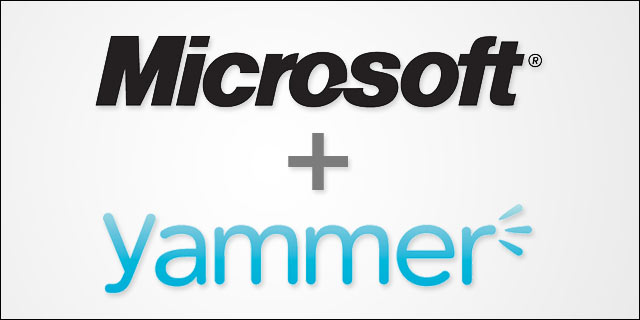 Here’s the context: Yammer started in 2008 as Twitter for the enterprise but expanded in 2011 to include more Facebook-like functionality. In just a few years, Yammer racked up 5 million largely unpaid users and is bringing the power of social networking to the enterprise with a cloud-based, freemium solution.

Microsoft has long dominated collaboration at the office with Microsoft SharePoint. In fact, SharePoint accounts for nearly $2 billion in yearly revenue for Microsoft. The recent surge of enterprise social networking products have left many SharePoint customers searching for more functionality to connect their employees. It makes obvious sense that a slow-moving tech giant like Microsoft would want to start offering their customers this new functionality, but what does this acquisition mean for the rest of the enterprise software industry?

Here are my five takeaways from Microsoft’s possible acquisition of Yammer:

First, social is here to stay. After Facebook’s rocky IPO last month, many entrepreneurs and investors were wondering if social software had actual value or was another sign of an impending bubble. Today’s (rumored) acquisition and the recent IPO of Yammer competitor Jive Software (whose stock is up more than 9% on today’s acquisition news), have illustrated that enterprise social networking is a hot market. Forrester predicts it to be a $6.4 billion market by 2016.

Second, cloud-based delivery for enterprise software is now the norm. For years, companies like Microsoft have made their money by selling customers software that they had to install and maintain themselves behind the enterprise firewall. Today’s (rumored) acquisition by Microsoft signals a giant shift in the software behemoth’s strategy when it comes to delivering software to enterprise customers.

Third, mobile collaboration at work is a growing medium and will soon surpass desktop collaboration. Companies like Yammer have made huge investments in mobile with many enterprise startups today focusing on being mobile-first. Cloud-based solutions that are also mobile make it easier for employees to stay connected on the go.

Ultimately, the consumerization of the enterprise caught Microsoft by surprise. Enterprise customers have quickly moved to a new model of purchasing – one where they try products before they buy, and when they decide to buy, they don’t want the headaches of installing and maintaining software on servers, desktops, or smartphones. The SharePoint sales model is no longer sustainable, and Microsoft recognized this.

Justin Lewis is Co-Founder and CTO at NationalField, a DC-based enterprise social networking company that focuses on connecting people with data to drive business performance. The company spun out of a project originally developed inside Barack Obama’s 2008 campaign for President. Lewis, along with co-founders Aharon Wasserman and Edward Saatchi, was named to the Forbes 30 under 30 in 2011.  Follow him on Twitter @justintlewis