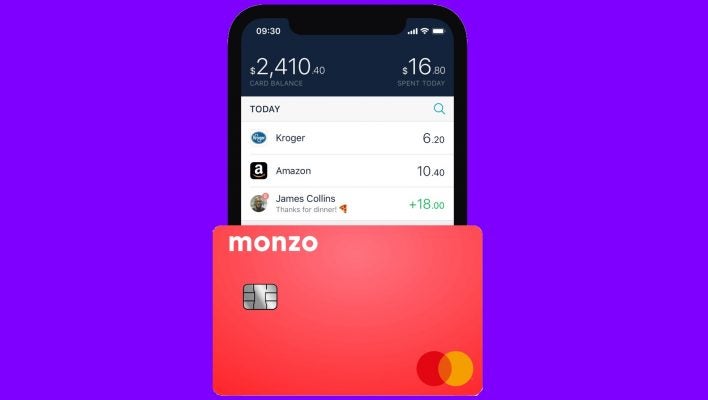 In June 2019, banking start-up Monzo announced its plans to launch in the US.

The UK finance company has garnered a lot of attention, both online and in real life, thanks to its distinctive coral-colored cards, and its intention to make the banking process easier.

But what is Monzo, exactly? And what do its plans to grow its offering in the US look like, and potentially mean, for US consumers?

As Monzo focuses its attention stateside, let’s take a look at the journey that led to this point.

Started in 2015, and now with a 800+ team spread across the UK (London and Cardiff), and in the US (Las Vegas), Monzo offers app-based banking to its community of 3.6 million users.

With a community forum, along with its aims to offer easily accessible and readable annual reports (you can view reports for 2017, 2018 and 2019 on its site), Monzo champions transparency. It even has a public system status page, so you can see any issues with the app.

This transparency has been at the forefront of Monzo since its inception, having reached out to its users to help test, develop and improve. While its brightly colored cards may be a talking point, it’s not all style over substance.

Monzo has a distinct tone of voice too – in fact, its tone of voice document is readily available on its site. A quick read through this shows that Monzo communicates with its users in clear, digestible language. Not only this, but its use of emojis and illustrations suggest a way of connecting with a millennial audience.

Monzo was included in our 10 Innovative UK-Based Tech Startups Making Moves in 2017.

How does Monzo work?

Without physical branches, it’s a digital-only service, with assistance and support available via live chat, as well as phone and email.

In the UK, Monzo accounts include: current, business and joint accounts, as well as those aimed specifically at 16-17 year olds.

However, the offering in the US is somewhat different: Monzo calls it a ‘light version’. With this option, customers can access a Mastercard debit card and the mobile app.

Some of the UK features are also available, including:

At the moment, it’s only possible to join the waitlist for Monzo USA.

In the UK, Monzo has full authorization, and is regulated by the Financial Conduct Authority (FCA), the regulatory body for financial services in the UK.

Although it’s a long term aim, Monzo isn’t a bank in the US for the time being – instead, it operates with a partner bank that’s insured by the Federal Deposit Insurance Corporation (FDIC). Money that’s held in Monzo accounts is insured by the FDIC up to $250,000.

Monzo is encouraging people to use Twitter or the community forum to help make a more US-specific version, including the ability to vote on the features that they most want to see.

Monzo in the USA

In January 2020, Monzo announced that the Monzo Beta cards would now offer contactless functionality, with original cards that don’t support this to be replaced.

As of its 24 January 2020 blog post, 1000 customers have been involved in the US testing process.

So, what’s next for Monzo in the US?

Monzo published its roadmap on its site, which shows that the company is working on linking to Monzo from other accounts, and a way to skip the waitlist.

Although it’s now possible to switch between the UK and US settings in the app for people with both accounts, one of the ‘ideas we might explore’ on the roadmap suggests Monzo may look at creating even more connectivity between UK and US Monzo accounts.

Ideas include UK – US money transfer, as well as the ‘get paid early’ feature.

The Get Paid Early feature allows UK customers to receive their salaries the day before their normal pay day. This is providing that certain conditions are met:

However, with reports that Monzo is operating at a loss, and the complexity of traversing state and federal laws, the company may encounter issues during its US expansion.

And, with features that are commonplace in the UK only gaining traction more recently in the US, such as contactless cards, there are likely to be cultural challenges too.

For example, data published by Kearney Italy shows that there are 50 billion cash payments in the US each year.

In comparison, there were 7.4 billion contactless payments in the UK in 2018. This is according to the UK Payment Markets Summary 2019 report published by UK Finance, a collective representing the banking and finance industry in the UK.

While some features from the original concept are already available in the US, such as the instant spending notifications and the app-based banking that it established itself with in the UK, it seems like more is yet to come from Monzo’s plans to grow its US market.

Providing an offering that meets US consumers’ needs as well as official requirements is a balancing act. It’s difficult to say what the future could look like for Monzo in the US. Right now it's a watered down version of the UK offering, somewhat understandable given that its US incarnation isn’t yet a bank in its own right.

However, based on how Monzo has developed on home turf, it’s likely to be an interesting experience in a new territory too. Monzo may not be essential right now, but all that could change if it develops on a par with the original UK vision.

Scarlett writes news stories for Tech.co. She can also be found writing about UK startups.