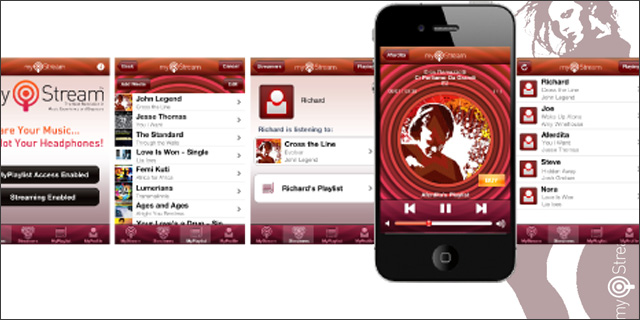 MyStream, a free app that streams music from device to device, could be a boon for a music industry that has been flailing for years.

“We’re making it more valuable to have your own copy of music again,” says founder Richard Zelson, whose background is in economics and real estate.

Founded in 2010, the New York City startup uses Bluetooth or Wifi to stream your music to other users, so it does no hosting or streaming itself. Music lovers can rock out to tracks simultaneously or hear 90-second clips from another user’s playlist – as well as sharing audiobooks and podcasts. Bluetooth (without Internet access) supports up to five listeners, and Wifi supports 20+, compared to one listener on the similar app PairShare.

Without the need for sharing headphones and bumping heads, MyStream enables new real-life interactions, says Zelson. Users can stream music through speakers at parties, as MyStream did at its launch party with the band U.S. Royalty; share playlists on long train rides across Europe, which is what inspired the idea for MyStream; or even meet someone on the metro through a mutual love of the Rolling Stones.

Besides making it more valuable to own music, MyStream should delight the music industry with its overcaution in complying with “constantly changing” streaming laws and a “buy now” button for streamed songs. MyStream makes money by taking a cut of those purchases, as well as from an ad banner within the app and (in the future) the app’s cost.

Investors have seen promise in this idea: MyStream raised a $300,000 angel round and $500,000 in private investment from Kim Cooke of Blue Water Capital. Some of that money is going toward an Android version; as for their other plans, stop by our Tech Cocktail NYC mixer this Wednesday to learn more.