Influencers and content creators on YouTube are big business, commanding millions in branding deals and attracting legions of devoted fans. It was just a matter of time before a fraudster had the bright idea to get in on the action with a YouTube scam. Recently, this has taken the form of a good old fashioned phishing scam.

Uncovered by popular YouTuber Philip DeFranco, who boasts over 6 million subscribers, the scammers claim to be the content creators themselves. The scammer reaches out to a potential victim, promising special prizes in exchange for a few personal details.

While phishing scams are nothing new, using YouTube as a platform and masquerading as the influencers themselves is a new twist.

What is the Scam and How Does it Work?

Philip DeFranco, a YouTuber who covers news, gossip and entertainment on his channel, uncovered the scam in a video entitled ‘Massive YouTube Scams‘ last week, having been affected by it directly. 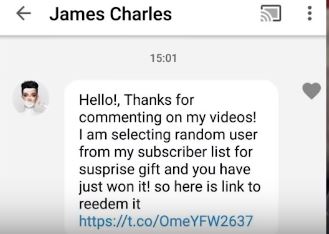 The scammer sends messages to anyone who has commented on a popular video, claiming to be the creator themselves. DeFranco highlighted examples where messages appeared to have come from him directly. But, they've also been sent ‘from' other big YouTube stars, such as make-up expert James Charles, who is so popular he managed to bring a UK city to a standstill last week.

The messages are all similar, thanking the commentator for their message, and stating, “I'm selecting random subscriber from my subscriber list for gift and you have just won it!”, followed by a link to a site for a giveaway for expensive products like iPhones. Once the user tries to claim their prize, they are asked for personal data, which is the jackpot for fraudsters.

According to posts on YouTube's own community pages, over 400 people have fallen for the scam so far. As those are just the ones who have reported the problem directly to YouTube. It's safe to assume there are many more.

YouTube's Response to the Scam

YouTube has been referring journalist queries to its support pages, where a thread on the issue has blown up, with plenty of people posting that they have been affected by the scam.

“We’re aware and in the process of implementing additional measures to fight impersonation. In the meantime, we’ve removed accounts identified as spam. You can also block any account that is spamming you. And you can report the channel via the Reporting Tool (best option is impersonation). Really appreciate you reporting spam in our messaging feature!” – Team YouTube

As well as suggesting that users block these fraudulent accounts, and report them, it also states that those have been revealed as imposter accounts have been removed from the service.

How To Avoid Phishing Scams

Phishing scams can come in many forms, whether it's an email, phone call, text or even a message on YouTube, as we've seen. There are some simple rules to follow to make sure you don't get suckered in.