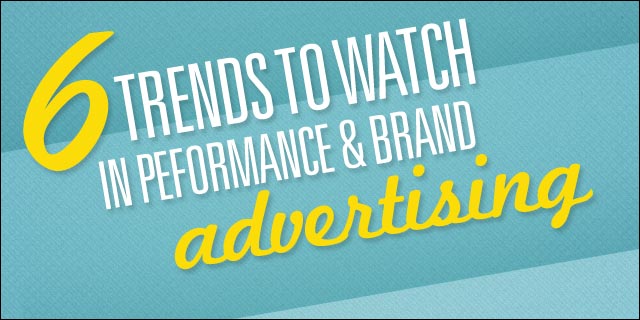 In this two-part series, Per Pettersen, founder and CEO of Impact Radius (and former co-founder of Commission Junction) highlights six key trends that are likely to affect the performance and brand advertising markets in 2014.

1. Mobile advertising will continue to explode

With more than 4.8 billion mobile devices in use around the globe – and smartphones becoming more common than toothbrushes – the adoption of mobile devices is by far the most transformative trend in advertising.

Halfway through 2013, many brands reached the point where tablets and smartphones counted for more than 50% of total traffic to their sites. This really woke up marketing executives, and now more than 60% of businesses are integrating mobile into their broader marketing strategy. Consumers appear to have responded positively to this push in mobile advertising, with mobile devices accounting for a third of online transactions in January 2014.

The trend is certain to continue as smartphone adoption advances in all markets, and as 4G is rolled out on all mobile networks.

This surge in mobile advertising is nowhere more apparent than in the case of Facebook, whose mobile ad sales rose from 49% to 53% of total revenue from Q3 to Q4, resulting in Facebook’s first-ever quarter with billion-dollar mobile ad revenue.

With advertisers taking mobile seriously, much of the earlier user pain in making mobile purchases is fading. This is evidenced by the fact that mobile’s share of online purchasing grew by nearly 50% this holiday season.

The clear majority of advertising spend continues to come from direct response advertisers. Brands still have work to do in making their mobile websites user-friendly. With mobile DSPs and programmatic approaches enabling easy access to mobile display inventory, we are destined to see brands consuming more of the available ad inventory going forward. Brands understand that driving traffic to a bad user experience on the website is counterproductive. So this will be sorted out in 2014, and we will see a significant increase in brand spend.

Native advertising, often called “sponsored content,” was huge in 2013 and will continue to grow in 2014. As of January 2014, 75% of advertisers have begun offering online native ads across their sites, indicating the effectiveness of such content in connecting with otherwise uninterested consumers. Consumers, particularly in mobile environments, are mentally blocking out display ads and not engaging. Native advertising promises to fix this by making “monetization” inherent in the user experience.

Facebook led the charge here with their “Sponsored Posts,” which are behaviorally targeted to users on FB. Pinterest followed with “Sponsored Pins” and Twitter with “Sponsored Tweets.” There is no question that it works for advertisers, but will there be a backlash from consumers?

Advertiser spend in this category should grow to 24% of total spend this year, which is massive. This trend isn’t expected to slow anytime soon, as experts predict native ad spending to exceed $3 billion by 2017. There will be many challenges for the industry, however, such as standardization, which is inherently very difficult as each application is distinctive. But these are exciting times, indeed.

3. Targeting and retargeting options will improve

There has been an explosion in both data and in the technologies needed to better target ads to consumers. There are DMPs, DSPs, and the media at platforms themselves that are increasing their targeting and retargeting options. The goal of these options is to increase how intelligently and effectively ads are targeting consumers, as measured by increased click-through rates and conversions.

This is particularly apparent in mobile device CTR, with smartphones seeing a 15% increase year-over-year (January 2014), and tablets a similar 15% increase. Twitter, LinkedIn, and of course Facebook are leading the charge here.

There will also be growing investment into multi-screen, with the goal of targeting the same user on multiple devices. Google is making a major push here as well as smaller, nimbler players, such as TapAd.

Advertisers will also become more aware of the value of their data, and will strive to ensure that vendors and partners are not “stealing” customers (or customer behaviors) in 2014, by storing or using the website visitors for unauthorized purposes.

Per Pettersen is the founder and CEO of Impact Radius (and former co-founder of Commission Junction).

Explore More See all news
close Building a Website? Get 50% off Wix premium plans until September 16th, 2021 50% Off Wix