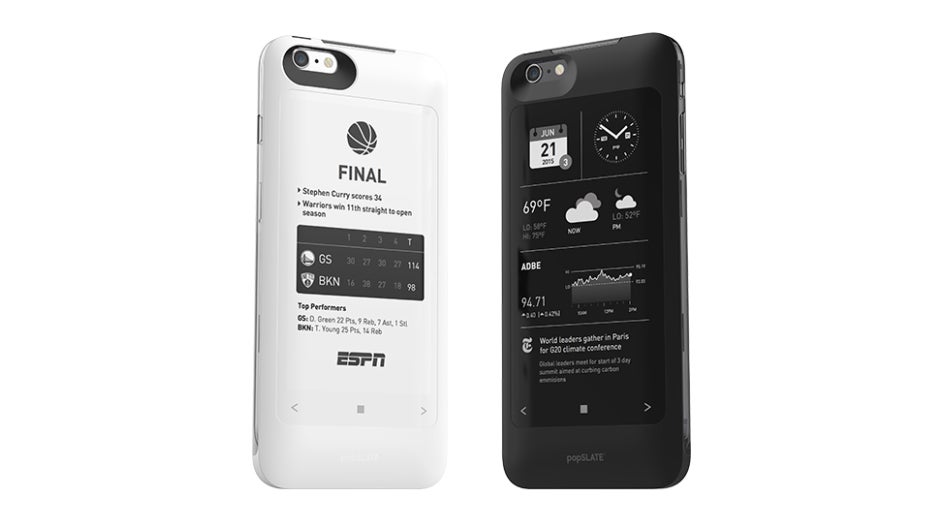 Being one of the best selling smartphones in the world, it comes as no surprise to realize that there is an absolutely huge number of cases available for the iPhone. A simple search on Amazon or eBay shows exactly that, with several different kinds of covers appearing – from the most stylish to the most useful and practical ones.

However, it is safe to say that most (if not all) are not nearly as useful and amazing as the popSLATE 2. While it can look like one, it is most certainly not a common iPhone case, as it introduces an insanely useful e-ink second screen to the back of Apple's smartphone.

Using a concept similar to the YotaPhone 2 smartphone, the popSLATE 2 features a shaterproof 4.7 inch e-ink screen, 0.7″ bigger than the previous version. Available for the iPhone 6 and all models after, it uses an integrated Lightning connector for communication and charging, which charges the second screen and the phone at the same time.

With 3 integrated capacitive touch keys, popSLATE 2 can run up to five apps at a time and can be customized with pictures. It also features a slideshow mode, dashboards, news feed, clock faces, list maker, digital wallet and e-reader. Another very useful feature of this case is that it can function as a backup battery case for the iPhone.

popSLATE 2 has an Indiegogo campaign running which, with a month left to its end, has been a tremendous success, largely surpassing the $75,000 goal. So far, it has raised nearly $130,000, 170 percent of its initial goal.

This is a very comfortable case as well, featuring a minimal and compact design and adding only 0.16″ (40mm) of thickness. So, if you are looking for a case that adds all the features of a smartwatch and an e-reader minus the devices, and can also serve as a reserve battery adding 9 hours of talking time and 4 hours of browsing, then popSLATE 2 is definitely the best choice.