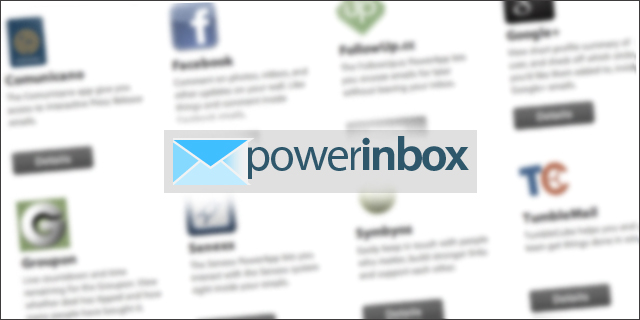 Boston-based PowerInbox, has just launched an API (in beta) that is a marketer’s dream.  Anyone from developers to publishers can add ecommerce, videos, photos, real-time updates and more right in the body of email messages.

Founder and CEO Matt Thazhmon walked me through a demo yesterday afternoon.  PowerInbox was originally created to house social media in your email, so you’d get a Facebook comment in your Gmail account, open it up, and respond right from the email.  Same with Twitter – you can reply to a tweet right from the email – and Google+.

Because this was working so well, Matt said they started hearing from other companies who wanted to make their own emails interactive.  He and his team had been kicking around the idea for an API, so they decided to focus on actually creating one.

The true beauty of PowerInbox is the fact that it removes the click-through step from the sales funnel. You could literally start shopping right there in an email, as you can see in the video below:

But this isn’t just a B2C, ecommerce tool.  Their first 10 partners span industries and include Fundraise, which allows donations inside emails; TimeTrade, which lets you schedule meetings within emails; and Vsnap, which allows Vsnap videos to be viewed within emails.

Because I am super curious by nature, I had to ask Matt where this idea came from:

My background is in engineering, so I am always trying to be efficient.  When I moved into management, I was just shocked at how much of a time sink email was.  Some days, I would get nothing done and just spend an entire day in email.  There were fundamental flaws with email, that much was obvious, so I decided to make it better from the inside out.  I realized that if I could do something inside the email, it would save a lot of time.

Just one small caveat – this is not a free-for-all.  You do need to submit your app and get approval – PowerInbox wants to prevent malicious apps and content.  (PowerInbox is compatible with Outlook 2003, 2007, 2010 (32-bit) and Gmail, Hotmail, Yahoo on Chrome, Firefox, Internet Explorer, Safari and Rockmelt.)

It’s super simple to make your own email, as Matt showed me during a screeenshare.  Definitely give it a try and let us know what you think!