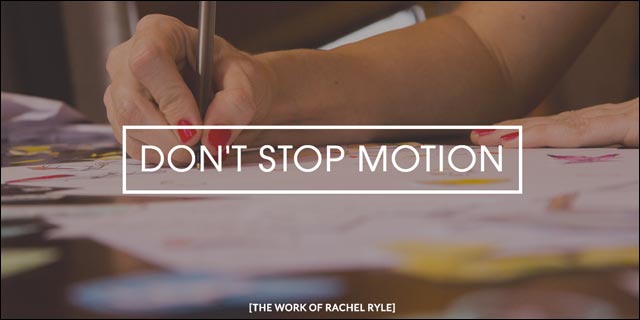 Every day Rachel Ryle sits down at her desk she looks up and sees the artwork from her first animation hanging on the wall. Entitled  “Make Something Grow”, Ryle feeds on it for inspiration as she continues to make her company, Don’t Stop Motion, grow strong.

“It all started with social media and posting things for fun,” says Ryle. “I never thought it would lead to all of this.”

Where it all led her was to make animations for big name companies and clients like CVS. What makes her a breath of fresh air, and quite unique to boot, is the fact that she’s leveraging Instagram for her success.

Ryle loves that people have a creative outlet with Instagram and can take awesome pictures and make them even better via the app. But when Instagram first released their video feature, the artistic slant diminished a bit.

“Within the first month of Instagram video people were using it, but not the same way they were using the photography,” says Ryle. “People weren’t taking time to make a pretty video: it was just videos at bars and sports games.”

To Ryle, the video function was screaming to be artistically tweaked. Being able to capture video on demand within 15 seconds might have seemed a limitation to some, but Ryle’s mind was blown wide open with creative force.

She started drawing by hand and capturing the images frame by frame, almost like a stop-motion animation. And she was belting out new creations every two days.

Having a background in marketing and brand partnerships, Ryle soon started thinking about merging her backgrounds with her art. The result was, to speak bluntly, epic.

“As soon as I recognized that this style of art was well received, I thought that brands or companies would hire me if I could market myself,” says Ryle.

She first focused on beer because – well – beer, and highlighted three different breweries around her in Colorado that had big social media followings. So, Ryle made a simple Instagram video and placed their beers in the animation.

The next day she posted an illustration that told everybody that she just started working with her first brand: Threadless. The idea here was that the breweries would see their beer featured in an animation, and upon digging deeper, see that Ryle was a legitimate artist with legitimate clients.

Honestly, it could have gone either way, but it totally worked out for her. Granted, she didn’t accept every single offer that came through her door because Ryle understood the importance of slow cooking her craft before launching full force into the ecosystem.

That was the moment that Ryle realized her own self-worth. Ever since then she’s continued to, in the spirit of her first animation, make both herself and Don’t Stop Motion grow.

“Looking back my first animations aren’t great, but people respect the vulnerability of putting something out there that isn’t perfect,” says Ryle. “It’s more relatable when it’s not perfected and beautiful. You just have to do it and stop talking – start doing.”

Here are some of her animations to make you smile:

Cookie Monster! This is one of my favorite recipes to make so I hope you enjoy it as an animation. Try baking it sometime, it's super fun! #stopmotion #animation #art #sketch #drawing #baking #recipe #cupcake #cupcakes #cookie #cookies #cookiemonster #sesamestreet #icing #decoration #decorations #cute #instavideo