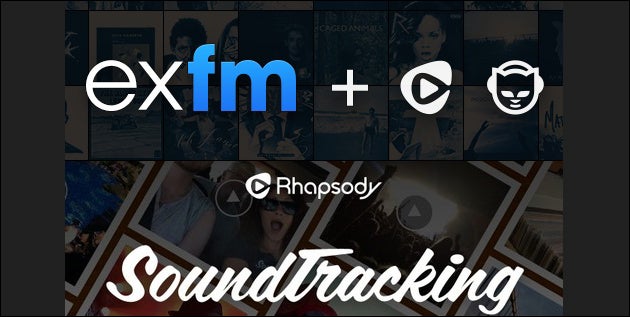 Rhapsody, the Seattle-based online subscription music service, announced today that it has acquired the NYC-based music discovery startup Ex.fm, as well as the Bay Area-based Schematic Labs, which created the music moment sharing platform SoundTracking. No amount was disclosed for either acquisition.

Just last week, Rhapsody announced that its premium subscription music service had reached 2 million subscribers across the globe. In the same post, the company revealed new partnerships with mobile carriers across Latin America and Europe. While the company has not said anything about its plans regarding these two major acquisitions, I think it's safe to assume that it will attempt to take on Spotify's dominance in the industry.

Ex.fm, which actually shut down this past May, was a service that recommended songs based on all the songs that users listened to across the Internet. In a post on their website, the company writes:

“By teaming up, we can build the ultimate music service with an amazing social discovery engine backed by Rhapsody's catalog of over 30 million songs…For the next few months, we will be heads down working. When we resurface, we are sure you will love what we have built. We've got some pretty amazing plans for iPhone, Android, Windows Phone and the Web.”

“We started SoundTracking with the simple goal of allowing people to express themselves through music. We’ve accomplished that and more, and now as part of Rhapsody, we are in an even better position to scale and innovate to a broader global audience.”

So, while the companies play coy and won't reveal much about what's ahead, it's pretty safe to assume that whatever will result is going to be a pretty robust competitor to all the other music streaming services.