Samsung Mobile announced today that the Galaxy S II smartphone will be available with three US carriers, AT&T, Sprint and T-Mobile, starting this fall. This announcement follows a successful product debut in Europe and Korea where Samsung sold five million devices in less than three months, making the device Samsung’s fastest selling smartphone ever.

The next generation Galaxy S II portfolio packs industry-leading hardware and software and the latest version of the Android smartphone platform into each device. The Galaxy S II portfolio is highlighted by Samsung’s own Super AMOLED Plus display technology, a powerful dual core application processor and a robust array of entertainment, messaging, social networking and enterprise experiences.

The core features Samsung is focusing on with this release include:

– Speed:  All three Galaxy S II smartphones are enabled with 4G service for fast connectivity speeds and dual core processors for fast web browsing, game play and content downloads – although none will have access to 4G LTE networks (Samsung has announced that it will be launching LTE versions of the Samsung Galaxy S II and Galaxy Tab 8.9).

– Display:  Samsung is really focused on their Super AMOLED Plus technology, which claims to offer extremely brilliant colors and clarity. The AT&T display is 4.3″ while the Sprint & T-Mobile release is slightly larger at 4.5.”

– Customization: An improved “TouchWiz” user interface with multi-tasking and application management, allows widgets to be positioned and re-sized to create your own visually rich home screen. The Live Panel creates a magazine-like widget view for immediate access to weather, social updates, email, news, photo gallery, etc – and provides a UI notification service on the lock screen that keeps you updated on the number of unread or new text messages and missed calls.

– Specialty Preloaded Apps:  The Galaxy S II comes with a number of preloaded apps, including:

– Android:  The devices utilize the Android 2.3.4 Gingerbread platform, which gives you access to over 250K apps, and supports an array of cloud services including content sync across the Galaxy branded portfolio with Google services (Books, Music, Videos, Email, Calendar), Samsung Media Hub and cloud photo sync through Picasa Web Albums and Google+.

We also like that you can shoot video and wirelessly link to your PC or HDTV.  The Galaxy S II has an 8-megapixel rear-facing camera with autofocus and flash and records video in 1080p HD. There's also a  2-megapixel front-facing camera for video chat (supports Skype, Fring, Qik and Tango).  All three Galaxy S II devices offer 16GB of on-board memory, as well as a microSD card slot that supports up to a 32GB memory card.

Despite some of their recent troubles with Apple overseas, the Galaxy portfolio could significantly boost Samsung's marketshare in the US. 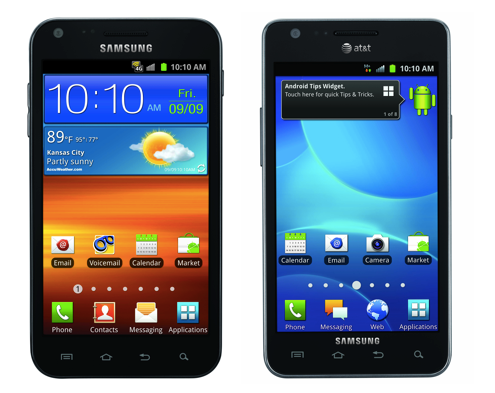 Editor's Note: Samsung is a sponsor of Tech Cocktail and is the title sponsor for the upcoming Tech Cocktail Mobile Mixer in Chicago on September 8th. Come to mixer to see a number of local mobile startups and get your hands of Samsung mobile devices. Tickets are available – RSVP now.