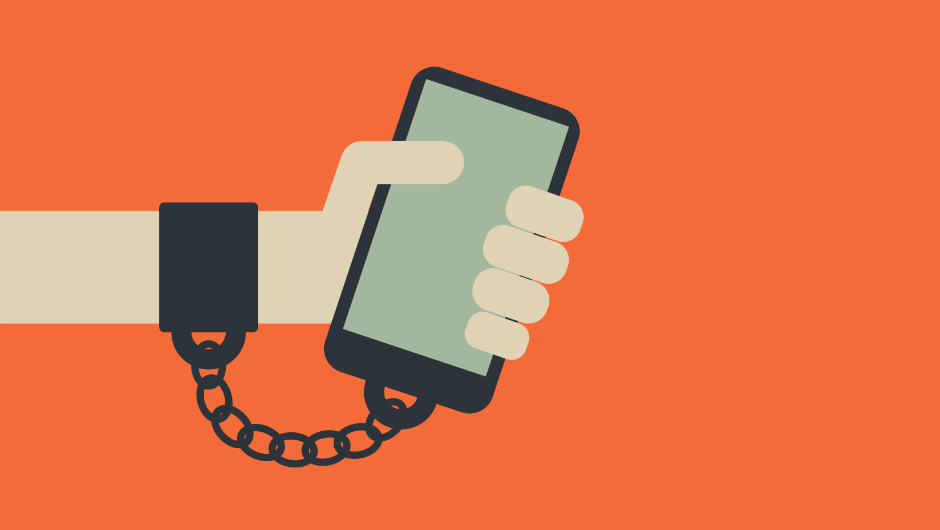 At one point, tech companies viewed our collective phone obsession as advantageous – the more time we spent staring at our phones, the more money they could make. Then, the mood started to change. People didn’t want to scroll like zombies anymore, and became aware of the negative effects it could have on them. And this led to Apple’s new feature, ‘Screen Time’.

Screen Time is newly introduced on iOS 12, the latest version of the operating system that powers Apple’s iPhones and iPads. Put simply, it tells users how much time they spend on their phone, when they use their phone most and what apps they use most. It also allows users to block access to apps at certain times or after a specified period of use.

So, what do the results look like? In my case, they’re not pretty. I’ve been using Screen Time since last week, when iOS 12 launched, and it’s proven to me – after dismissing the advice of family and friends – that I am, indeed, obsessed with my phone.

What Screen Time Tells Me About My Phone Use

I downloaded and installed iOS 12 the day it was released, and set up Screen Time controls the same day. After a little over a week, it’s already collected a large amount of information about my phone use. You can only see a seven-day view, but this weekly snapshot is pretty telling. 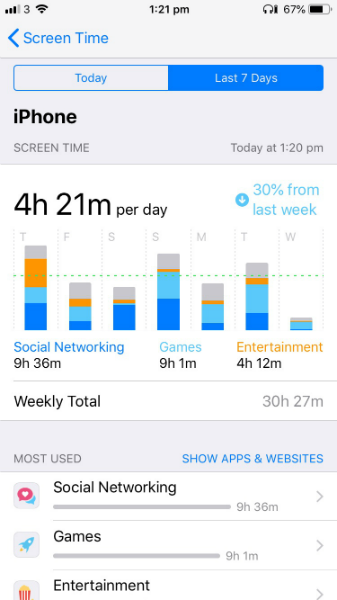 Am I using this time productively? Judge for yourself. Over the past week, I’ve spent over seven hours playing a game called Bloons TD 6 – a tower defence game with cartoon monkeys trying to pop ever increasing waves of balloons. Time well spent?

Over the same week, I’ve had a copy of Mary Beard’s international best-selling book on the history of Ancient Rome, SPQR, literally sitting in the bag I take to work every day. I’ve read just 150 of its 536 pages. 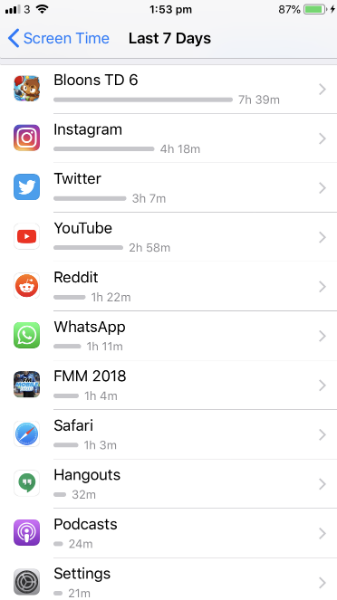 Has My Phone Use Had an Impact on Me?

It’s hard to say definitively what sort of effect my smartphone usage has had on me. You'll often hear arguments made about impact on attention span, sleep patterns, or even happiness.

In my case, it seems to be more than just a mental impact. I’ve even noticed that a dull pain in the muscle at the base of my thumbs has emerged over the past year or so. This could be due to the way I crane my thumbs over the sides of my iPhone to play the ridiculous monkey balloon game I’m so obsessed with.

It might also have something to do with my job, of course revolving around typing, at speed, for extended periods of time. But I rarely type with my thumbs, in fact, I mainly use my left thumb for banging the spacebar, and my right thumb just kind of hovers above the keyboard. And, I’ve been working on a computer, at a desk for five-days-in-seven for over five years now.

More concerning than my thumbs is the impact my phone use has had on my relationships. I’ve recently moved in with my long-term girlfriend. While my excessive inconsequential phone use is nothing new, when we’ve both been at work all day and, at any small break in conversation I pull out my phone to peruse Twitter or play a game, I cause problems that needn’t happen.

Why Is My Phone Use So High?

Understanding why I’m using my phone so much feels like the only path to curtailing my use of it.

If there’s one point in my day responsible for the predominance of my phone use, it’s during my commute. It typically takes about an hour on the way to work, and anything from an hour to two hours on the way home (thanks to the infrequency of London commuter trains).

Commuting is boring and I struggle to endure people chatting on the train. To avoid having to hear these people, I typically listen to a podcast (I’m currently listening to Slate’s excellent Slow Burn series on Watergate, if you’re interested). When I’m listening to a podcast, I struggle to read books at the same time. So, I pull out my phone and game away the journey.

What you might have spotted is that I don’t spend a lot of time on messaging apps. In fact, I have only spent two hours over the past seven days on WhatsApp, Hangouts and Messages put together. 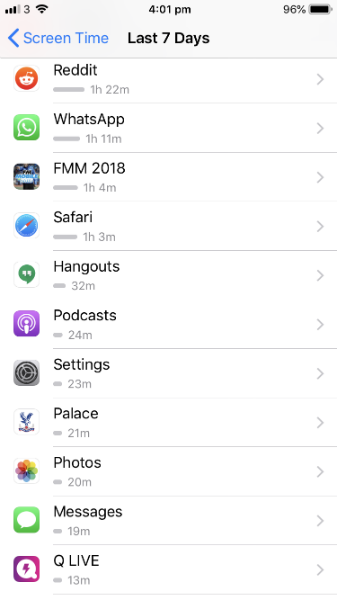 So the good news is I’m not eschewing real conversations in favor of phone-facilitated chats. In fact, over the past seven days, I’ve only received 522 WhatsApp notifications and 74 Messages notifications.

I have, however, received 116 from the Reddit app. But that’s because the company needs to work on the frequency of its notifications, not because I’m some obscure memelord. 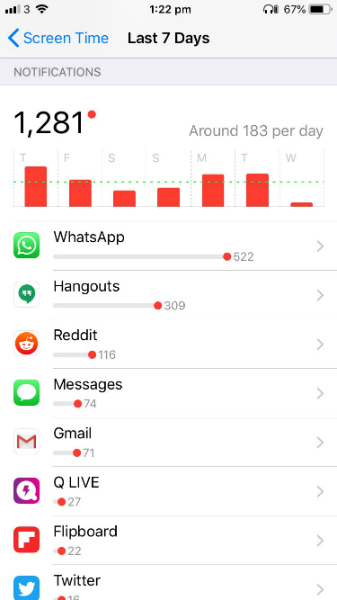 I also spend a lot of time on social media apps – Instagram and Twitter, in particular. In fact, I spend more time on those two apps than I do playing the balloon game. And this points to another of my phone foibles: I scroll when I’m bored.

Whenever I’m stuck for something to do, I’ll check Twitter to see if there’s been any political news I should know about, or what’s going on with the soccer team I support. If there’s nothing of interest, I’ll head over to Instagram and take a look at some trainers I can’t afford and see what the B-list celebrities I follow have been up to.

This doesn’t cure my boredom, or often give me anything to do, but it's better – and crucially, easier – than doing something.

Why Does Apple Want You To Use Your Phone Less?

This means, for example, that you should use your phone to have meaningful communications and not get sucked into aimless group chats or, it means that you should spend less time scrolling, and instead be directed to the best content.

Apple isn’t alone in trying to change the way we use our phones. In fact, Google, announced app time tracking and controls at its I/O conference back in May. So, why are better quality experiences for customers also better for Apple and Google?

By reducing the time you spent churning through content, the less likely you are to get burnt out, and the better the chances of you paying attention to a specially-chosen ad.

Stories about phone addiction and the physiological effects of extended phone use are commonplace (even Kim Kardashian has carpal tunnel syndrome from taking too many selfies). And, it makes sense for Apple and Google to give users the tools to reduce their phone use themselves – the hope being it stops users from abandoning the smartphone ship altogether.

There’s material and moral value in these companies reducing our overall amount of phone use.

We might object to the material rationale. But it’s genuinely important to understand your true phone use. It may even give you back some hours of your life that would otherwise be spent with cartoon monkeys and balloons.

How To Use Screen Time on your iPhone

Screen Time comes pre-installed on the new iPhone XS, XS Max and XR. However, if you have an older iPhone, you'll need to update to iOS 12 to make use of the new feature.

Now that you're on iOS 12, you'll find Screen Time in the Settings menu, below the Notifications and above the General sub-menus. From there, you'll be able to switch between your phone's usage in the current day, and your usage over the past seven days by tapping the button marked “iPhone“.

You'll also be able to find the sub menus which allow you to set limits on your phone usage including: