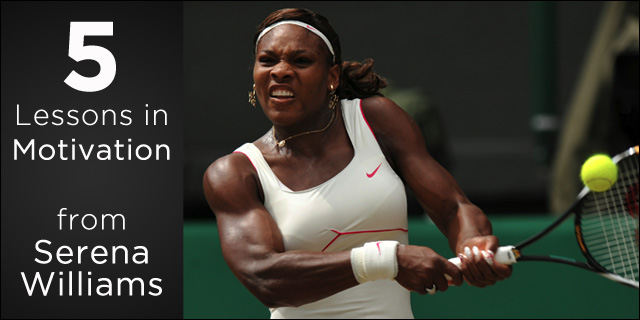 What a joyous celebration by Serena Williams upon winning the Olympic gold medal in women's singles tennis in London.  There she was, at a loss for words, standing center court at the All England Club. Less than a month earlier, Serena had earned $1.4 million dollars and her 5th Wimbledon championship on this very same court. Yet on this day, this supreme competitor had not earned as much as a farthing (hey it’s London), but she celebrated with the same – if not more – exuberance than 15 year-old Katie Ledecky upon winning the 800 meter women’s freestyle swim race.

What is it that makes Serena the ultimate competitor? What can entrepreneurs learn from her sustained success – when she has fought back from injuries and ignored the whispers of her being washed-up? There’s a lesson we can learn in the excitement and joy Serena shared with us a few days ago in London, and there’s a lesson we can learn from the ultimate competitor who fights just as hard and appreciates the win even more than when there’s a million dollars on the line.

There’s a correlation between motivation and success. What can we infer regarding the motivational forces that make Miss Williams the ultimate champion?

Sure you might say that Serena doesn't need money, so she's able to compete for honor instead of cash.  But many people born with a silver spoon in their mouths don’t sign up for a grueling practice regimen. One famous rich guy just sent his wife’s dancing horse to the Olympics, investing his cash in place of sweat.

Great entrepreneurs don’t retire when they make it rich; they continue to make an impact.  Think Bill Gates and Warren Buffett as examples of consummate entrepreneurs that keep driving their businesses forward. For them, it's not about the money.

Serena didn’t just win an Olympic medal for herself, she won it for her country. People work harder when what they work for is bigger than themselves. It’s not a get-rich thing. It’s a do-something-with-meaning thing. It’s a make-an-impact thing.  It's why many relay competitors put up their best performances – they are competing for the team.

3. Chip on Your Shoulder

Williams has won the grand slam of tennis and she’s a successful business woman, yet she has never won an individual Olympic gold medal. She’s come back from injuries and slumps. She’s the younger sister of an exceptional tennis player and celebrity. Like many successful entrepreneurs, she has a chip on her shoulder, and she always has something to prove.

Williams joins Steffi Graf as one of only two women to have ever won the “Golden Grand Slam Singles Tennis Championship,” winning all four major tennis championships (US Open, French Open, Australian Open and Wimbledon) and the Olympics. Not only is Williams the only American to achieve the Golden Grand Slam, but she’s also the only person in history to win the singles and doubles championships in all five events.  She’s left her mark like Michael Phelps, who has earned 18 gold and 22 total medals during his Olympic career. These athletes made history and earned their place in history, as have entrepreneurs like Thomas Edison, Bill Gates, and Steve Jobs.

Williams is wealthy and famous, yet she gets up every morning to work out, hit thousands of tennis balls, drive herself to exhaustion in pursuit of perfection, and watch her diet.  Why? Because She’s not going to get beat.  She’s like that entrepreneur whose peers tell her that she’s never going to get her product to market.  She’s like that startup CEO who keeps knocking on investor doors and ignoring hundreds of no’s in the pursuit of one yes.  She’s playing for the win. She's not going to get beat.

Williams is an athlete, an entrepreneur, and a success.  She shares qualities with many of her entrepreneurial brethren who aren’t quite as famous and are pursuing their startup dreams.  There’s much we can learn from an accomplished professional who still feels the joy of winning – those who play hard, even when there isn't farthing on the line.