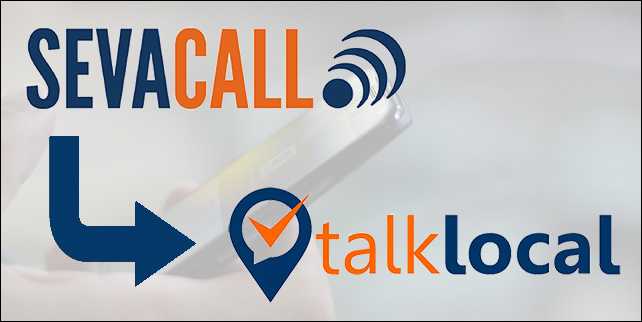 Seva Call, the DC-based startup that allows consumers to easily connect with local service providers in real-time over the phone, officially announced today its rebranding to talklocal. The company has also announced the closing of a $2.6 million round of Series A funding.

Talklocal takes away the stress and frustration of having to research and contact the right local business. Whether you're looking for a roofer or an attorney, their online search platform will connect you with up to three local service providers over the phone in about 90 seconds. Since launching in 2012, the company has sent more than one million calls connecting consumers to local businesses.

According to talklocal cofounder and president, Manpreet Singh, the idea for the rebranding came about a year ago and was really a response to the confusion they encountered when trying to work with small and medium businesses (SMBs). Singh said that while consumers – for the most part – understood the idea behind the name “Seva Call” (namely: that consumers would be saved from make a call on their own), SMBs really had some issues.

“Consumers would get the name and why we came up with it, but they didn't know why it was spelled differently,” said Singh. “The SMBs were really more of a problem. They would get calls from us and they'd ask ‘Why's it called ‘seva call'?' They never actually got it. And, so, we wanted to come up with a name that would speak to both sides – that would be easy to pronounce, easy to say, easy to spell, [and] also work well with partners. ‘Talklocal' does that – it speaks to both sides: we help consumers talk locally and we help businesses talk locally to consumers who need help.”

Having previously raised $1.3 million in seed funding, the company has raised a $2.6 million round led by the Crystal Tech Fund, Privateer Capital, Fortify VC, and Launch Angels' Where Fund. Other participants in this round of financing include K Street Capital and Brett Hurt, founder of Bazaarvoice and Coremetrics.

“The product was built with the seed round of funding, and now it's all about marketing and distribution,” said Singh.

This new round of financing works in sync with talklocal's rebranding, as the company looks to expand even further, signing on more SMBs and getting more consumers to know about their product. The company currently has 7 full-time people on staff, 5 sales people, and 6 interns, but with this funding, the company looks to hire aggressively (especially in sales and engineering) to further increase push their momentum and to build on their product.

Talklocal currently operates in more than 50 major cities in 49 states across the U.S. In addition to their office in D.C. (located at the Crystal Tech Fund), the company has recently opened an office in San Francisco, where it hopes to add members to its operations on the West Coast. In the upcoming months, the company will launch mobile app versions of their online platform.

Learn more about talklocal by visiting their site or Facebook page.