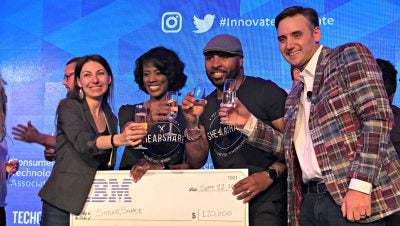 At this year's Innovate Celebrate, the McKinney, TX-based startup ShearShare won first place in the Startup of the Year competition.

Chosen from an initial batch of nearly 1,000 startups and after competition against approximately 50 other startups in the Startup of the Year competition, ShearShare managed to convince judges that they deserved the top spot among the five finalists in the competition.

ShearShare is a company that connects salon and barbershop owners to individual beauty operators to fill unused salon suites and stations on a temporary basis, allowing salon and barbershop owners make money on their excess inventory. Licensed cosmetologists and barbers then lease suites and booths by the day. With ShearShare, licensed barbers and cosmetologists — hair stylists, makeup artists, nail technicians, estheticians, massage therapists — have the flexibility of working in a professional salon environment without committing to a long-term lease contract.

As the first-place winner in the Tech.Co Startup of the Year competition, ShearShare receives the following:

In addition, Klickly won a spot a Eureka Park at the 2017 CES. Klickly is a data-driven impulse payment solution for social streams and mobile experiences. Their AI buy-button powers commerce in ads, emails; Klickly kills the sales funnel, allowing customers to purchase with a touch everywhere. Buy what you want, when you see it.