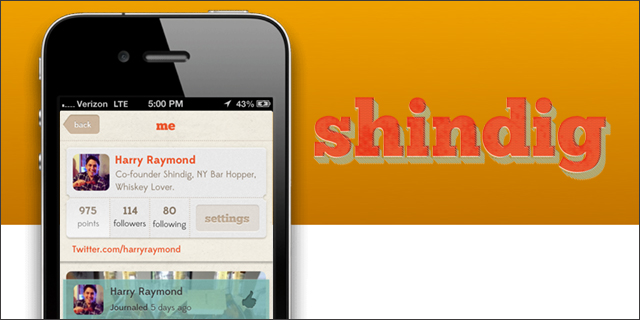 Harry Raymond always fancied himself a refined drinker of alcohol, but no matter how much wine he drank, he could never quite remember the details about it. What was the region it came from? What was the vintage? What were the tannins like? What exactly are tannins?

So, like most of us, he typically settled for the second cheapest bottle of wine on the list. But he wanted to provide the world with more than that, and he cofounded Shindig to answer that burning question: what was that awesome drink I just had?

“A lot of other drinking apps are tailored towards aficionados, winos, and people who know tons about beer,” says Raymond. “We didn’t want to have to fill out an IRS form every time we logged a drink, and we wanted to avoid narrow verticals.”

Originally, Shindig was a drink journal where you added your alcohol from the database, put in a tasting note, and then a location. But users wanted to follow their favorite brew masters and see what their friends were drinking, so social functions like photo kick and recipe sharing were added. 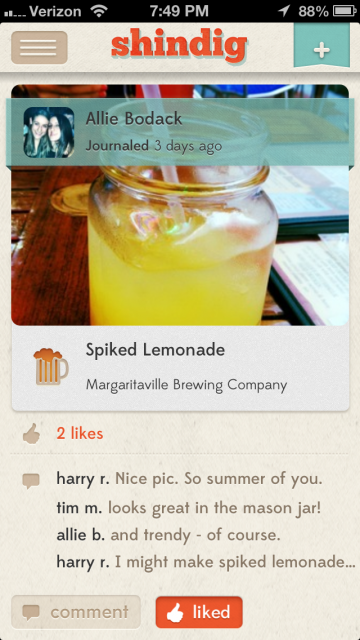 This brings to light a crucial part of Shindig’s operations, though: the community. Everything they do centers on the principle of community, from customer feedback to future growth.

Shindig rolls out new updates based on customer feedback every two to three weeks, and it has been challenging for them to stick with that model of rapid iteration. But the organic, bottom-up growth that has resulted is almost unreal.

This directly correlates to the fact that Raymond and the rest of the team are putting all of their time and money into the product. Above all else, they focus on fostering a healthy user base that can contribute to the community.

“If we continue to focus on building a killer community with a killer app, word-of-mouth is how we will grow,” says Raymond. “That’s how you get to 1 million users. PR and marketing can get you to 50,000, but a kickass product will get you 1 million.”

Their hard work landed them in Startup Jackpot’s recent competition, where they came home with the $10,000 prize. And being the community-focused people they are, they allocated some of that money to prepare their API and open it up to developers: they want to bring as many people in on a good thing as possible.

Shindig is only on iOS currently, but they are planning a Kickstarter campaign to bring a native and redesigned build to Android. No matter the platform or update, though, Raymond’s direct line will still be listed, so give him a call the next time you get booze-infused ideas about Shindig.

Tech Cocktail is a media partner of Startup Jackpot.