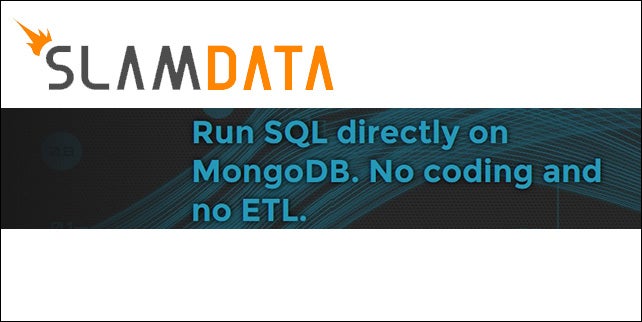 MongoDB is a widely popular tool for developers – it gives them the ability to store data structures in a way that allows for greater flexibility for building and deploying applications. The issue, however, comes into play when companies want to access that data and actually make some sense out of it; in order to run analytics on data stored on NoSQL databases like MongoDB, you have to commit hours writing custom code or manually copying the data to another database. SlamData has created a new solution that allows users to use standard SQL to query modern NoSQL datastores, thereby removing the need to invest in unnecessary work.

“We want to build the analytics infrastructure that becomes the standard for the next 20 years of computing,” said SlamData cofounder and CEO Jeff Carr. ” To become the leading business intelligence company for modern data.”

Time is a limited resource (and arguably the most important resource), and developers shouldn't have to spend more of those resources on mundane tasks when they could be working on creating more apps or improving on their current ones. SlamData improves the efficiency of data analytics by utilizing SQL to perform ad hoc queries on data stored in NoSQL databases like MongoDB. And this efficiency is much needed, especially considering the amount of data that apps generate. By easing the way one accesses, analyzes, and builds reports from the data on on these datastores, SlamData has opened up capability to those without the technical know-how.

The platform is wholly open-source, so you can download SlamData now from their website or head over to GitHub. From there, all you need to do is link SlamData with your MongoDB database, and then start writing SQL queries – simple…fast…efficient.