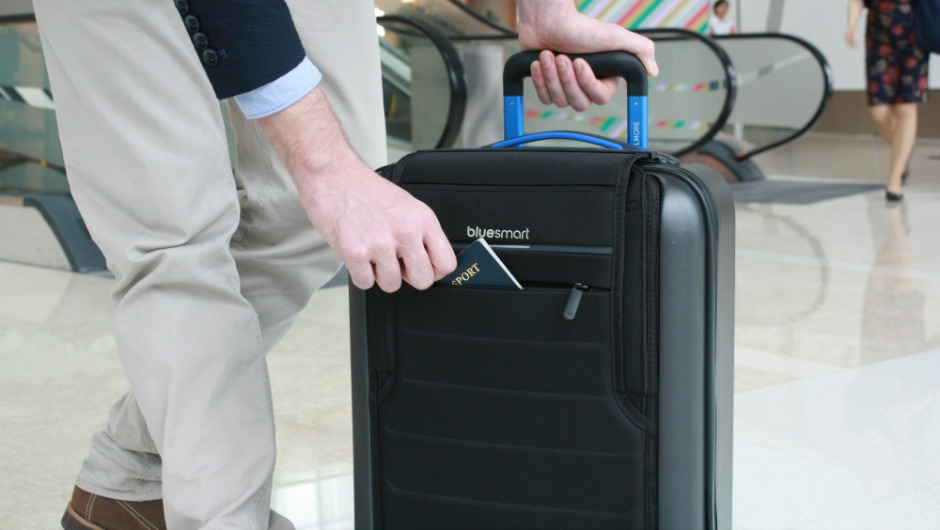 If you're an avid traveler, the right bag goes a long way. As someone that has been on no less than fifteen airplanes in 2018 so far, having a practical piece of luggage was incredibly important to me – it's why I've owned a Bluesmart smart bag for almost two years. With its built-in battery, it could charge my many devices, plus it was perfectly simple, beautifully stylish, and surprisingly sturdy. I loved it.

But last week, I traveled to Los Angeles for a wedding. And now, my trusty Bluesmart smart bag is sitting in LAX next to a trash can. That's because, apparently, smart bags aren't allowed on airplanes anymore.

Thanks to a rare collaboration from top airlines around the country in late 2017, smart bags have been effectively banned from airplanes since early 2018. News which hadn't reached me, since I'd travelled with that bag several times since the start of 2018.

The new policy primarily targets the lithium batteries that power most popular smart bags. It points towards numerous fires and explosions that have happened involving other lithium battery-powered devices.

The policy does specify that carry-on smart bags are allowed on flights. However, it stipulates that, in the event of a gate-check situation, the lithium battery must be removable, so that it can stay in the main cabin, rather than in the cargo hold with the other checked bags.

If your smart bag does not have a removable battery and a gate-check situation arises, you are simply out of luck. And by “out of luck,” I mean you'll have to purchase a brand new suitcase, move all your belongings into it, and leave your trusty Bluesmart smart bag next to a trash can at LAX.

And that is, of course, after you've already missed your flight.

Lithium batteries have been involved in explosions on airplanes, so this policy is far from unfair. Samsung felt the brunt of these stringent airline policies when its Galaxy Note 7 phones started blowing up in people's pockets. Plus, hoverboards have long been banned from airplanes for their fire-prone batteries, so there was already a precedent set for this kind of move.

However, unlike the swift and conspicuous action of airlines against the Samsung Galaxy Note 7, the smart bag ban is comparatively unknown in the general public.

As a tech reporter, an avid flier, and an obsessive user of social media, even I'm a little embarrassed that I'm writing about a policy that went into effect more than six months ago. But, after telling my story all week to anyone who would listen, I realized a disturbing trend: nobody knows that this policy exists!

Even airline employees are confused by the policy, as many of them have begun stopping approved smart bags because, quite frankly, it's hard to tell what is and what isn't allowed.

“Some airline employees have prohibited passengers from carrying on their carry-ons with the battery inside,” wrote Steph Korey, CEO of Away in an internal email. “Unfortunately, this isn’t just a few isolated incidents — over the past several weeks, we have heard from hundreds of customers regarding incidents where airline employees have made it clear they don’t understand their own airline’s policy.”

This clearly important bit of policy has somehow slipped through the cracks of public and internal knowledge to the point of causing some serious problems. Fortunately, as long as you're informed, you should be able to avoid any unpleasantness the next time you decide to travel.

If you're just as uninformed and confused by the smart bag ban as I was, have no fear! I learned the hard way, so you don't have to end up leaving your trusty Bluesmart smart bag next to a trash can at LAX.

Which airlines have banned smart bags?

Key question! Right now, Delta, American Airlines, Alaska, Southwest, United, and Hawaiian all have specific policies in place banning checked smart bags. Again, they all allow you to carry-on smart bags, but if you have to check it and you don't have a removable battery, you're going to have a bad time.

Which smart bag brands are approved?

Any brand that features removable batteries will be allowed on flights from the above airlines. This includes popular brands including Away, Arlo Skye, and Raden. While Away and Arlo Skye remain in business, Raden is “no longer in operation,” as the policy change has made it too difficult to “process returns, exchanges and repairs.”

Unfortunately, Bluesmart owners are not so lucky. The decidedly difficult-to-remove batteries in its Series 1 and newly-released Series 2 models make them nearly impossible to fly with, and the company has gone out of business. In a statement, the company lamented the policy changes, and apologized to its many supporters. Travelpro, the popular travel brand, has since acquired “the majority of Bluesmart's intangible assets.”

Can I get a refund for my smart bag?

Maybe! Away and Arlo Skye are still in business, so any claim to a refund would go through their support teams. However, because the batteries are removable, you'll likely have trouble convincing them to take a return based simply on the inconvenience of removing the battery every time you want to fly.

Now for the out-of-business companies. Bluesmart has suspended operations, one of which was handling returns. But, it's provided an avenue for customers who are entitled to a refund with this useful link. Unfortunately, Raden has not provided such a link, and does not appear to be taking returns at this time.

Airports don't run perfectly. With billions of moving parts, millions of employees, and thousands of flights leaving every day, keeping track of the little things can be pretty difficult.

However, a policy regarding the handling of potentially explosive luggage is not a little thing. And, quite frankly, as the former proud owner of a trusty Bluesmart smart bag, a little clearer notice would've been nice.

Read our original review of the Bluesmart smart bag on TechCo