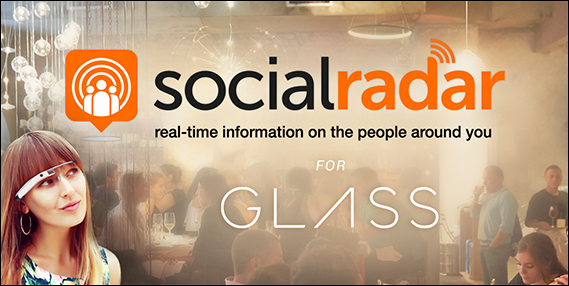 This morning, SocialRadar has announced the launch of its app for Google Glass. The app is free and available now to download for Glass users.

Back in January, the DC-based company led by former Blackboard CEO and founder, Michael Chasen, launched its mobile app for iOS. Using geo-location data from social networks, including Facebook, Twitter, LinkedIn, Foursquare, Instagram, and Google+, SocialRadar provides users with real-time information about the people around them.

Through the new Glass app, users can have this information readily available to them on their Glass screens, allowing them to engage in more meaningful and better informed interactions. Because the information is sourced from various social networks, SocialRadar users can get a glimpse at who precisely are in the same room and how they're connected to them. Through the app, they can even find people who share similar interests and even catch up on what each person has been up to.

“We see a huge potential market for our app related to wearables and we're excited to be one of the early leaders in tech development,” said founder and CEO, Chasen, in a press release. “We see huge potential with Glass to fundamentally change the way people meet and connect, by mixing social media profiles and location in real time.”

According to Chasen, SocialRadar was one of the first Glass beta testers in the DC region, and began working on an application for the wearable device after recognizing its potential to change the social landscapes in which we interact. Data from the IDC suggests that wearable devices will reach 19 million units in this year alone, with a dramatic increase to 111.9 million in 2018.

But is it worth it to build apps for Glass, at all? Since launching Glass, Google hasn't released numbers on how many it has sold, but up until a one-day sale last month, estimates on purchases of the wearable device were in the 10,000 range. This means that the Glass community still remains a coterie, and therefore any app that's created for Glass will only be used by a minute percentage of the overall population. If, however, the Glass community does manage to bolster its numbers in the next couple of years, I guess it's certainly better to have an app for the wearable device now, rather than having to catch up with development later.