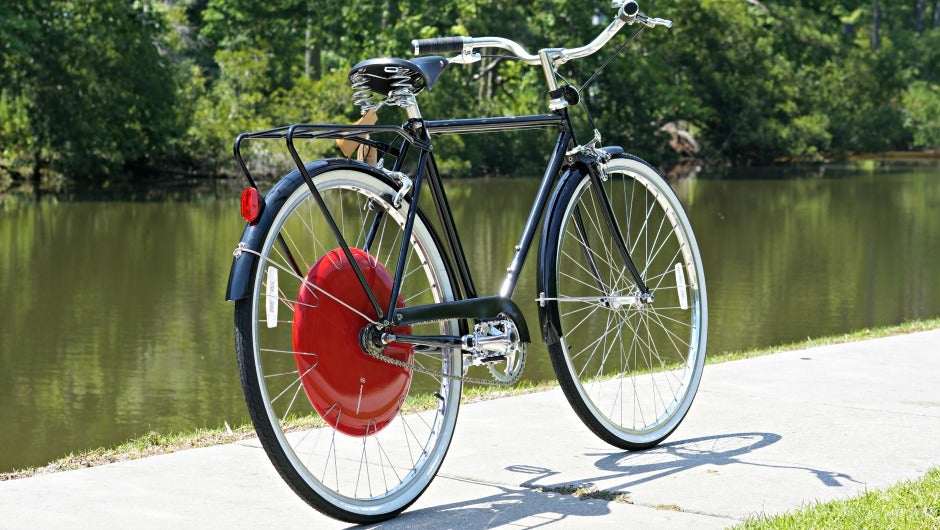 On December 15, 2009 MIT attended the United Nations Climate Conference and unveiled perhaps one of the most hyped pieces of tech to hit bicycles in ages: the Copenhagen Wheel. Now, nearly a decade later, the concept that went from viral success to the top of every bicycle nerd’s wishlist has finally hit the market en mass and spun out into it’s own company, Superpedestrian.

Unlike most traditional ebikes, the wheel is designed to be added on to almost any single or multi-geared bike with minimal work (and no wires!), turning your pedal power into an enhanced experience. In other words this badass wheel will turn your meager effort into a 20 MPH cruiser without even breaking a sweat.

As an avid cyclist for most of my life in some form or another and more recently into triathlons, getting my hands on the Copenhagen Wheel to try out was on the top of my wishlist. But would it live up to the hype? That is exactly what we set out to answer over the course of a month. Superpedestrian was kind enough to send over one of the three bikes they offer with the wheel pre-built in (which of course I meddled with) called The Trousers. It’s a stylish, hipster friendly cruiser featuring all metal frames, a rear rack, and of course the Copenhagen Wheel.

To set the stage a bit, Charleston, SC is a very flat city. With the exceptions of a few incredibly steep bridges, the biggest incline variations you’ll get are typically due to large potholes. With cruiser wheels this isn’t a problem, but for those of us on road and tri bikes, it can be painful. 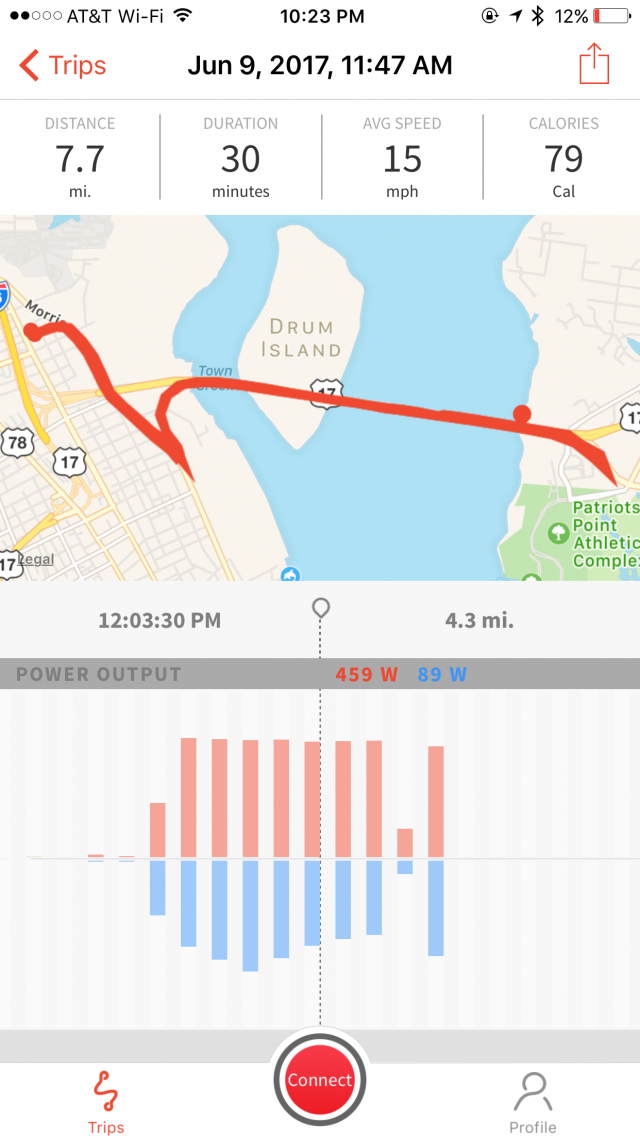 To get things started I began testing the bike within my neighborhood doing some basic one and two mile loops. By default it’s in turbo mode, and wow do you feel that kick in. As soon as you start to pedal the Copenhagen wheel does its thing and will quickly push you to its 20 MPH limit. Once you max it out you’ll feel it find a balancing point, but if you try to push beyond that speed the motor turns back off.

Next it was on to a commuting ride to drop a box of at the post office. I strapped the box on to the rear rack, did a mix of road, sidewalk, and bike lane riding, and it was easy to tell how much effort the wheel exerting to push me forward. I was to the post office and back in no time, and didn’t even break a sweat. A few days later I rode The Trouser bike from my place into work, about 6 miles away, and again got an insanely smooth, effortless ride out of it. A few coworkers gave the bike a whirl too, with one in particular saying how much he loved the boost it gave.

Also, it’s a bit more difficult to tell how fast you’re going on the bike, but watching someone on it is an entirely different situations. People were flying on it, and that’s pretty entertaining considering that it looks like a beach cruiser.

Finally, it was time for the last big test: Charleston’s Ravenel Bridge. The bridge is supposedly the third longest cable-stayed bridges in the Western Hemisphere, coming in at 13,200 feet. In other words it’s about 2.5 miles each way, with some leeway on the ends. As the steepest, bike friendly part of Charleston, going up that bridge is a solid little workout with about a 380 foot climb.

According to the TomTom Adventure GPS watch and Strava, the Copenhagen Wheel shaved about two minutes off each segment when compared to going over it on my Felt B14 tri bike. For example, going from the Charleston side to the Mount pleasant side with the wheel I had a time of 8:10 and an average heart rate of 92 BPM, but on the B14 I had a time of 10:49 and a heart rate of 112 BPM.

Going back the opposite way saw similar results, and according to the GPS watch, it also topped out at 26.4 MPH and there was quite a bit of breaking involved as to not smash into runners. The app output also showed that the wheel was doing all the heavy lifting, while I just got to sit back and enjoy the ride. Overall the ride and speed output lived up to the hype, maybe more so. 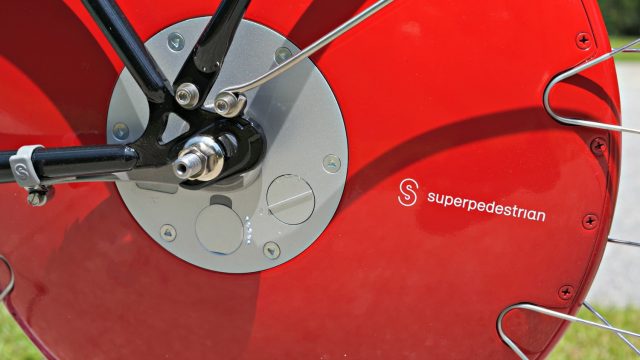 With an estimated top speed of 20 MPH, the Copenhagen Wheel has a range of about 30 miles depending on your speed settings. It also has regenerative braking, but frankly I couldn’t find a lot of details regarding this one. As for speed, due to US regulations the motor does have to shut off after exceeding 20 MPH, so it may feel like it’s holding you back until you decelerate at that point. As you’re pedaling it’s easy to find that top speed balance though.

Within the app you’ll get access to five ride modes, with turbo being the default. The ride modes are: standard, turbo, eco, exercise, and off. Each gives you data no matter what, but the others give you various speed variances or elongates your battery. Exercise mode holds it back even more, adding resistance to your ride.

The app will also track things like your trips, distance, duration, average speed, calories burned, and most importantly how much work you are doing versus the wheel. The app also shows you the health of the wheel, just like Automatic Pro does for a car, due to the hub's internal self-diagnostic system.

The motor within the wheel pushes out 350w, with a 48 volt Lithium Ion battery stabilized at the center so that it doesn’t spin. The battery should also have a lifecycle of about 1000 chargers. From our experience a full charge will typically take from two to four hours, and it uses a standard wall outlet and the included maglock style charging cables. 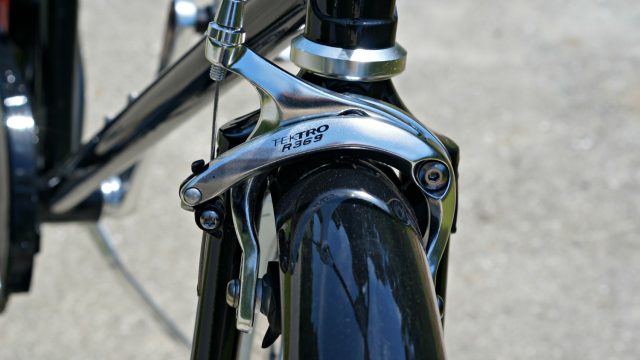 The hub/wheel itself weighs just under 17 lbs, but that will basically double the weight of a standard road bike. The Trousers bike in particular is all steel, which means it’s going to be a bit heavy to lug around for storage. On this particular bike you’ll also get several accessories and features like leather grips and a leather saddle, a tiny bell, and front and rear reflectors. Be for warned, the seat is super hard and uncomfortable.

The bike also comes with Kenda Kwest 35c wheels, a40/15 gear ratio, and Tektro R369 Road Brake Caliper brakes. The particular bike I reviewed also comes in either white or black, and features a powder coated steel frame with a rear rack. 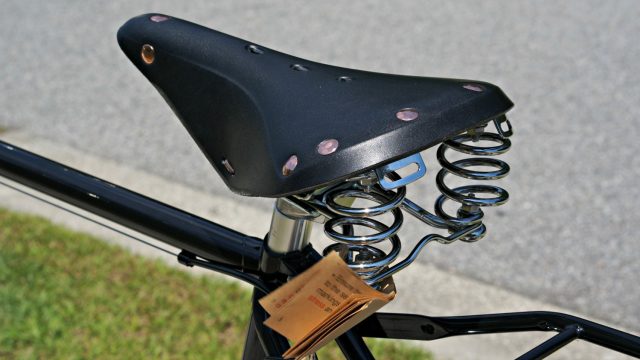 Should you buy Superpedestrian’s Copenhagen Wheel? Well now, that is the $1500 ($2000?) dollar question. If you have the money to burn, I can wholeheartedly say that this bike is absolutely fantastic. If you already have a steel framed bike that you enjoy and it can support the wheel itself, that too would be a great choice.

With that said, this bike and the included technology is not necessarily designed for the casual rider looking to pick up your basic mongoose at Walmart, but more likely would use it for commuting in some form. If you compare it to the cost of a Moped, the wheel still comes in cheaper, and you can ride it/park it more places. As someone who has spent more than this price tag on a bike before, I can certainly say that it’s an investment, but once you give it a try you’ll likely fall in love with it. Superpedestrian also offers a monthly installment plan too though, so there is that.

All the positives aside, there is of course competition on the market. A few brands in particular have tried to steal the concept, others are still trying to crowdfund their solution, and there are of course other modular engines and motors you can add to a bike, but none currently look as awesome or install as quickly.

The only really negative that I have on the bike, nothing to do with the wheel, is the seat. Even my tri bike, which features a super think Evo seat, is more comfortable than that thing. If you buy the bike, get either a seat cover, new saddle, or heavily padded cycling shorts.

Overall we give Superpedestrian’s Copenhagen Wheel and Trousers bike a 4.8 out of 5. The wheel it self gets a perfect score. If they got rid of that evil seat we’d give the bike a perfect score too for doing exactly what it was designed to do while looking fly as hell.

Where to buy: Superpedestrian

Read more reviews about Gear and Gadgets at Tech.Co