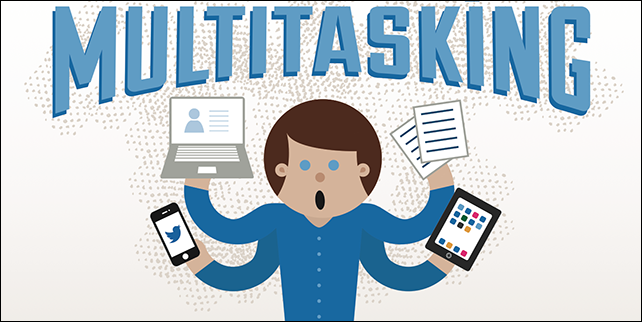 Multitasking is a myth – or, at least, the belief that one can successfully accomplish more than one task at any one time is certainly grounded on shaky foundations. As much as anyone wants to claim that they're prolific multitaskers, research on the subject proves otherwise. According to video conferencing platform Fuze, a continuation in the belief that multitasking is an effective productivity tactic is actually costing the economy billions of dollars annually, and much of this multitasking can actually attributed to something that we sit through nearly every day: meetings.

In a recent infographic produced by the company, the company compiled research that suggests that we're maybe (definitely) multitasking too much during meetings. According to a survey conducted by Fuze, 92 percent of information workers admitted to multitasking during meetings – with 41 percent going so far as claiming that do it often or all the time. That shouldn't be surprising considering that, nowadays, it seems we're sitting in meetings that seem to last forever and don't even necessarily need our presence (I mean do we really need to have a one-hour meeting on topics that can simply be hashed out in email?).

I think what's most interesting about the infographic is negative impacts of multitasking on our actual productivity and on our brain. Major drops in productivity, additional time to complete tasks, increased errors, and even a temporary drop in IQ – all negative effects of multitasking discovered in a 2009 Stanford study. Further, more recent research suggests that multitasking can actually permanently damage your brain (or may be the result of an already-damaged brain); a University of Sussex study found that high multitaskers had less brain density in the brain region responsible for cognitive and emotional control.

The greatest takeaway from this, I think, is to cut out unnecessary meetings, and make sure everyone is engaged in meetings that do matter. Check out the rest of the infographic below: