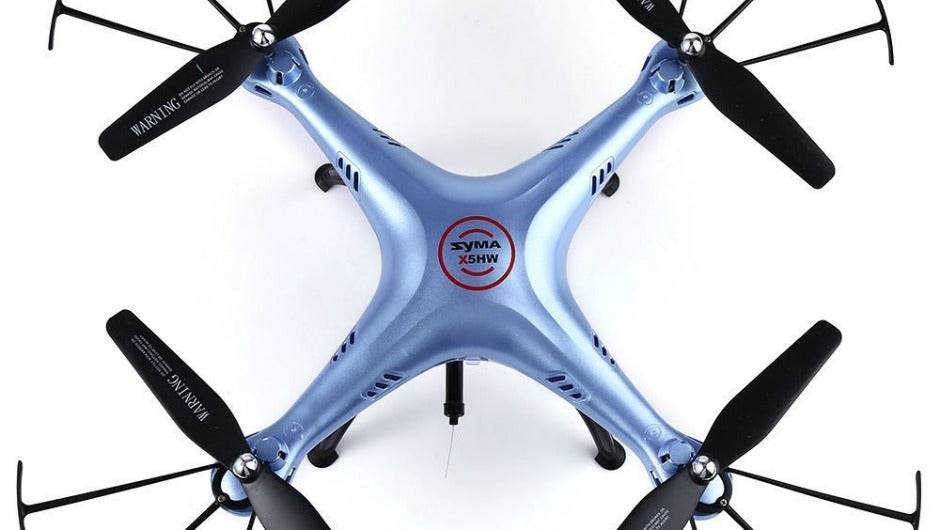 Being one of the more established entry-level brands on the market, earlier in the year we were excited to play around with a few of Syma’s quadcopter drones. Once we learned about an FPV (first-person view) version of the Syma X5 drone, we were keen to check it out. Unfortunately, our initial excitement quickly turned sour as the X5HW is like the drunk brother of the standard X5. FPV technology is certainly not cheap – and, unfortunately, it just doesn’t work very well with this low-cost quadcopter.

We tested this entry-level FPV quadcopter over the course of a month on windy days, inside, outside, and with our new favorite test: into walls.

Just skip to the end if you want to watch this smash into a wall. And, yes, the full name of the drone is a mouthful.

The Syma X5HW is a bit different from their other models as it includes a built-in barometer to help it retain its position and the FPV feature. Out of the box, the X5HW is almost ready to fly, just pop batteries into the controller and charge up the unit battery. It’s probably best to also add the included landing gear on, as well, or you’ll be facing some rough landings – even impossible landings – with the camera attached. Initial setup time is anywhere from two to five minutes, minus the battery charging. You can also add on the propeller guards, which I’d suggest doing for your first few flights.

Once you turn the quadcopter on, it needs to immediately be placed on a level surface (or start there) so that the barometer can adjust appropriately. If not, it will take-off on you, and it won’t stop until the hover mode kicks off. If this does happen, hold down on the left stick (which controls elevation) and the motors should turn off. That feature is both great and a huge pain depending on the situation.

To get the FPV mode up and running let the drone adjust to its surface, then open the Syma FPV app (available for iOS and Android) mobile app. Open your WiFi settings and look for a signal with FPV in it. Switch back to the app, hit the start button, and you should start to see through the camera. Within the app, you can take pictures and record video. Don’t bother watching through the camera to fly it though.

Overall, the X5HW does fly well as an entry-level quadcopter, but unfortunately they went and played with the system and added on some junk that frankly just doesn’t work. Being a fan of FPV drone racing, I know that the footage you see isn’t necessarily the greatest; however, being able to see in real-time is the most important part of it. Any lag or frame-rate loss and you’re flying straight into a wall. If we ignored this feature, though it is its primary one, we’d still rate it about the same as the Syma X5. Unfortunately, it does have FPV – and it sucks. Not only does it suck, the recorded video footage also now sucks since it’s terribly laggy.

Beyond wonky FPV features, the new hover mode is actually really nice if you’re learning to fly. After the barometer is adjusted, the quadcopter shouldn’t technically hit the ground as the throttle is kept as 50percent unless you override it to land. In the X5 there was a constant struggle to maintain height while also trying to turn it. For some reason, headless mode also appears to be on by default, which makes this a bit sluggish. Hit the top left button on the controller to gain more flexibility in the X5HW’s movement.

For flight time, it depends on a few things but typically you can get 4-7 minutes out of a full charge. Landing gear, FPV mode, and propeller guards will affect the weight and ultimately the time in air. Each full charge will take about 120 minutes. One nitpicky thing that we found though is that they changed the battery on this model. Before you could pick up spare batteries for under $5, which isn’t necessarily the case for this one.

Like the X5, the top right button allows you to do flips and rolls, and on the controller you can adjust the trim of each propeller. The one benefit of the video and photo controls moving to an app is that it’s no longer hidden within a trim button (looking at you X5).

One of our biggest gripes with the Syma lineup is over the lack of intuitiveness. Now most people don’t even touch the instruction booklets, but these are generally unhelpful due to how unclear they are. Beyond that, most buttons are not labeled, and for this being designed as an entry-level quadcopter, you’d figured there would be some basic UX components like saying which button flips versus which one activates headless mode.

The quadcopter itself is built well and it can clearly take a beating (watch the end of our video). Syma definitely builds this with the notion that they will be smashing into things around your house and outside, and typically any replacement parts you might actually need are very cheap.

Syma’s X5HW also features two different color schemes, a red and white one, and a blue and black one. They also still have the goofy fake buttons on the controller to fill space.

Should you buy the Syma X5HW? Probably not. We give the Syma X5HW a 3.5-ish out of 5. It’s fun to fly, but the primary focus is on the FPV feature and that is mostly junk. At the price point and functionality, you can save a few bucks and just get the regular Syma X5 and get the same level of enjoyment. You’ll also have a slightly better camera to record video rather than stream it. Check out our review from earlier in the year, which we absolutely recommend that for first-time flyers.

Where to buy: Gearbest (use promo code JRCHX), Amazon