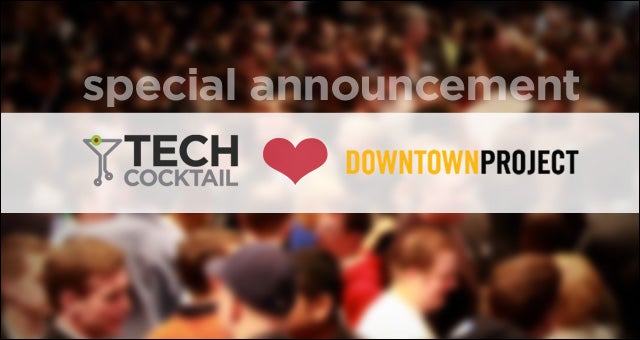 Today, we’re excited to announce that Tech Cocktail has taken a $2.5M investment from Tony Hsieh’s Downtown Project (Hsieh is also the CEO of Zappos.com). Over the next year, Tech Cocktail will focus on deepening the coverage, exposure, and resources we currently provide to new startups and startup regions all across the United States and the world. And following in the footsteps of our past conferences and festivals (e.g. Startup Mixology, DCWEEK) we'll soon be announcing an exciting new national platform for startups and their regions around the country – sign up for details here.

At Tech Cocktail, our mission is to help entrepreneurs navigate and enjoy the startup journey by providing resources, connections, and community. We’ve written thousands of articles covering startups from across the globe and seen over 30,000 people come to our events in the last year alone. We’ve done this as a bootstrapped company since 2006.

Many of the companies that initially showcased at our events as much smaller startups are now much bigger or have been acquired, like Groupon (demo’d as The Point), AddThis (as Clearspring), Foodspotting (acquired by OpenTable), Blue Sky Factory (acquired by WhatCounts), Socialthing (acquired by AOL), and Wine Library (by Gary Vaynerchuk). We’ve had the pleasure of working with big brand advertisers and sponsors like Oracle, Samsung, Sony, Sprint, Verizon, Pepsi, Coke, Cars.com, ChicagoMicro, Sprint and more. We’ve also had great partnerships with American Airlines, Microsoft, .CO Internet, Saper Law, FR&R and others.

We’ve known Tony Hsieh for over 5 years, dating back to a party that we threw together for CES 2009. It’s great to have a strategic partner who really understands entrepreneurship and the importance of celebrating and building community around it. We’re also delighted to open up our headquarters in downtown Las Vegas to support the efforts of Tony and his team with the Downtown Project and to be leaders in the VegasTech community. We still have offices in DC, Chicago, and Boulder, but with the regular flow of thought leaders, entrepreneurs, and startup founders visiting to check out the Downtown Project, we wanted a work space and studio downtown to host events, live shows, and interviews.

It seems like just yesterday (though, it was 2006) that I was working in Chicago for Tribune Interactive and Classified Ventures, and I’d founded Tech Cocktail with my friend, early Feedburner employee Eric Olson. We wanted a way to amplify the Chicago tech startup scene, and the idea quickly took on a life of its own as our side project continued regularly in Chicago, Boston, DC, and Boulder. In 2010, Eric moved on to other things and I brought on veteran technologist and early AOL employee Jen Consalvo to help run the business. Together, Jen and I have been able to take something that was a side project for Eric and me, and turn it into a nationally recognized media company.

Since receiving the funding from the Downtown Project, we’ve been working on beefing up our team to move faster and grow. Our event team, led by Julia Fischer, who was our first loyal team member, now has the added support of DC-based event planner, Kim Blackburn, who has worked with Tech Cocktail on a part time basis for the past year. Silicon Valley veteran and former communication consultant Cathy Brooks is advising with Tech Cocktail to help produce our monthly Tech Cocktail Week in downtown Las Vegas, while Mollie Andrade also joins the Vegas office, focused on Tech Cocktail Week events and team support. Editorially, Senior Writer Kira Newman has been managing our team of contributors, along with Meg Rayford, where we will also be adding some additional editorial support. Prominent VegasTech organizer Gabriel Shepherd has joined sales veteran Mary Ellen Delaney to do business development and sales. DC Tech organizer Justin Thorp has joined the team to run community development while Zach Davis will grow our online marketing and analytics, while also making his regular editorial contributions. And we are thrilled that serial entrepreneur and Co-founder of 1776, Evan Burfield, continues on as a strategic advisor.

Bootstrapped since our birth, we are now amped to add some additional fuel to the Tech Cocktail fire as we look to bring on additional key team members in sales/business development, editorial, design and development to help further realize our mission.

Hope to see you soon either online or at an upcoming event.

Explore More See all news
close Building a Website? Get 50% off Wix premium plans until 22 April! 50% off Wix
We use cookies. By browsing our site you agree to our use of cookies.