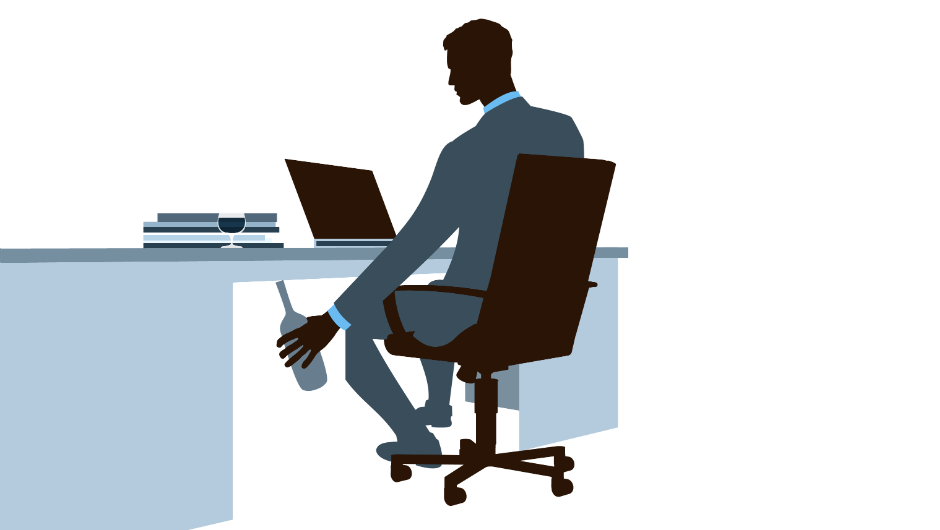 Workplaces and alcohol have a long and tipsy history together, from 60s-era Mad Men culture to a co-working space hot-button topic today. It's no secret that the tech industry is pretty drink-friendly, with a beer fridge often nestled between the ping-pong table and a snack bar on the list of attractive workplace perks.

Now, a new study has pulled tech drinking culture back into the spotlight. The tech world, the study found, is the single industry most likely to allow or sponsor alcohol consumption in the workplace.

In a survey with more than 1,000 respondents, Niznik Behavioral Health found that the tech industry took home the prize for the most drinking-friendly workplaces. The marketing and advertising industry came in third, and the construction industry came in second

Specifically, a little over half (53%) of the tech industry was found by the study to include alcohol at the team bonding events. A further 35% of tech firms offer company-sponsored happy hours.

Moreover, about half (49%) of the employees across all industries (not just tech) thought that drinking with a coworker or their boss would improve their relationship. However, moderation is still in order – most said that two drinks was the right amount.

Granted, it makes sense that a little light drinking can improve team bonding. But, there are plenty of potential downsides, and the negative impact of too much drinking was highlighted by the study:

“Heavy drinking can lead to regrettable disclosures, and work events were no exception to this trend. Respondents were most likely to report revealing secrets to colleagues after drinking at a work event or complaining about work issues in a way they later regretted. Another 9 percent simply said they embarrassed themselves by becoming clearly intoxicated. In such cases, some would propose a proactive approach: Rather than waiting for others to broach the subject, express your mortification and move on.”

Over-indulgence is an issue likely to crop up at any drinking event. However, it's an expected downside, rather than an existential threat to the concept of workplace drinking itself.

A larger issue is the cultural pressure on those who won't drink at all.

In other words, even moderate workplace drinking can have a concerning effect on the one thing it's supposed to encourage: employee bonding. 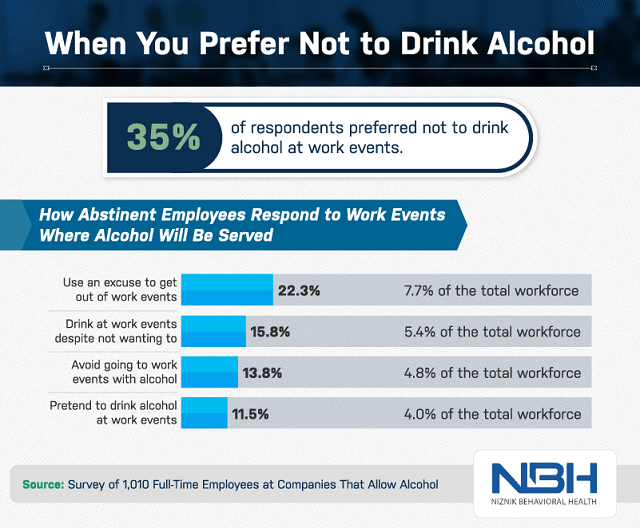 There are plenty of anecdotes to back this up online, from one tech employee's account of the variety of experiences being “the sober one” (hey, at least hearing secrets beats dealing with vomit), to tech startups alleged to have excluded non-drinkers because they weren't a “culture fit.”

Needless to say, you don't want a full third of your workplace to feel uncomfortable at your party. If you're committed to drinking, make sure that alcohol-free options are easily available and try to fight any stigma or pressure as best you can.

According to a recent CB Insights report, the world’s largest brewer, AB InBev, has made seven acquisitions or investments in the space, and believes “low-alcohol and non-alcoholic business [will] represent 20% of global sales by 2025, up from 8% today.” 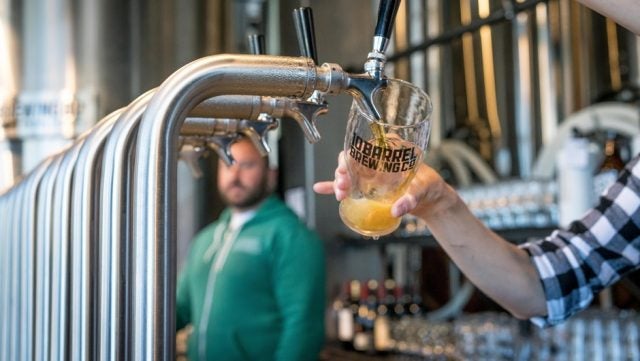 Are Dry Events the Answer?

Dropping the alcohol at a workplace event isn't likely to upset too many people, with almost a third of the survey's respondents saying that they'd even prefer a healthy alternative such as massages or exercise.

“Dry activities also appealed to a significant portion of people who liked to drink at work events,” the study found. “At least 30 percent of this group would trade drinking events for sponsored lunches, massages, fitness training, and permission to bring pets to work.”

Dry events may not quite replace drinking ones in the tech industry. But, there's a sliding scale for how inappropriate workplace drinking can be.

Sponsored happy hours may feel fine, but team bonding exercises will make abstaining team members a little more uncomfortable if non-alcoholic beverages aren't included. Drinking at after-work events can feel better than bringing beers directly into the nine-to-five itself, but the pressure to conform to a tech work culture can remain.

The bottom line: moderation is a must. And the tech industry's status as the number one top drinking industry indicates that it might need a tad more moderation yet.