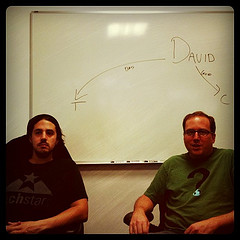 TechStars the seed accelerator and startup incubator that got it's start in Boulder, Colorado in 2007, has been expanding like mad. They have now taken on branches in Boulder, Boston, Seattle and most recently New York. TechStars also made big news earlier this year as they were part of the Startup America initiative, rolling out the open-source accelerator model via the TechStars Network.

I visited the TechStars NYC office when it was just 15 days old and the paint on the walls was still drying, and spoke with TechStars founder and CEO David Cohen and New York Managing Director David Tisch. They shared some insights about why they expanded to take on the Big Apple, how the program is going as well as advice for entrepreneurs looking to startup. They also shared that the New York community has been extremely supportive and the local investment community of 27 investors and venture capitalists offered funding to the New York program.

Today is the culmination of the first New York program as eleven startups that have participated in extensive mentoring, seed investment and counsel will be take the stage at TechStars NYC Demo Day. So there could not be a better time to share the video interview with the team of David Cohen and David Tisch from the New York TechStars office. Watch the video (below). We will circle back soon with details on the eleven startups that launched at TechStars NYC Demo Day 2011.