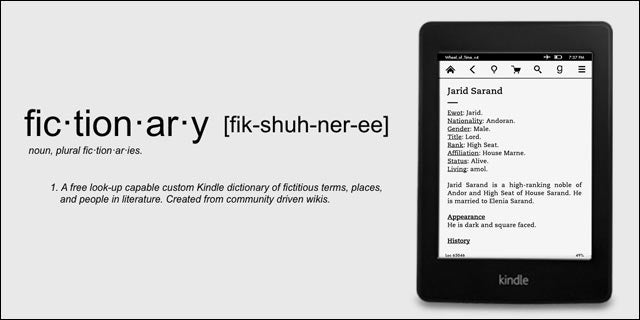 Dave Byard, founder of The Fictionary, has built an interesting platform that is targeting a market some might call completely cornered by Amazon: the e-reader market. He’s not building a new piece of hardware, but rather innovating on the pre-installed dictionaries on said e-readers.

The Fictionary is comprised of these little fictionaries, a term Byard created and defines as a free, look-up capable custom Kindle dictionary of fictitious terms, places, and people in literature. The content is derived and created from the multitude of community-driven wikis already available.

“I kept saying how neat of a utility it would be to look up all of the fictional information in a book if you needed it. Sometimes a character will pop up 3 books prior, and then the author gives him a nod later and you might not remember,” says Byard.

Byard began his project a couple years ago as a side hobby, and then about 6 months back he began setting himself up for a bigger shot at the market. He wrote some code to pull the data into Kindle format while working on the Wiki syntax.

“I gave it to a couple of friends and they spurred me on to do something with it because they liked it so much,” says Byard.

The Fictionary is still very early in its existence, and the LLC was only approved July 2014 while the site launched in August 2014. Initially, Byard wanted to charge customers for the Fictionaries, but he quickly realized that because of where his content was stemming from – open license Wikis – anybody could take his content as well.

He also ran into the issue that people might not want to buy this content. Ultimately, Byard decided to offer the library of The Fictionary content entirely for free to create a market for himself, so to speak.

Currently he’s got some ads running on the site to bring in some revenue, but the more exciting aspect is that he’s been in talk with self-publishing authors who want to get featured on the site with their own Fictionaries.

“It’s my opinion that there shouldn’t be any e-book made today, at least for the Kindle, that doesn’t come with a glossary of terms both fictional and real,” says Byard. “If it has words specific to that piece of work, there’s no reason to not have those words readily available to you at the press of a button.”

The technology already exists for Byard, and all he’s doing is using it in a new way. Somebody, in the beginning of the e-reader boom, built in a dictionary for these devices. And then they built in the ability to put in custom dictionaries, which were mainly used for translation purposes.

In other words, this market is ripe for innovation. And the over 1,000 early-adopters of Byard’s platform would tend to agree.

“If you’re given a choice between books, and one has a Fictionary and one doesn’t, I want people to choose the one with the Fictionary. It’s a tool that makes the difference,” says Byard.

Surely, Byard has a long road ahead of him, but there’s something vital he has on his side: a pain point screaming to be solved. Further, he’s got the wherewithal to solve it, and his competition is relatively non-existent. I smell a win, but only time will tell; we’ll keep you updated on all that Byard does.