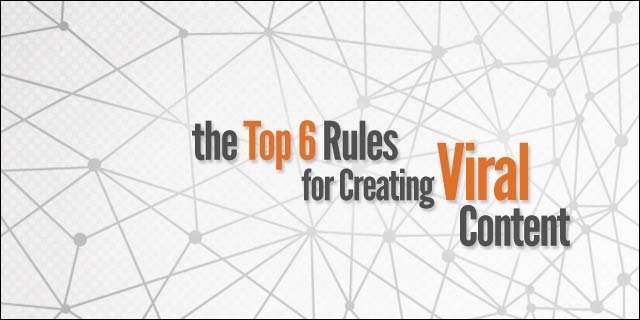 With the recent success of one of my Internet pranks (basically telling the world that Abraham Lincoln Invented Facebook), Tech Cocktail asked if I would share with you some of the elements necessary to create viral content.  So here’s what I know, in order of importance.

1. There is never a guarantee.

You need to realize going in that if you’re actually trying to create viral content (i.e., lightning in a bottle), it has a high probability of not working. No knock on you; it’s just the nature of the game. Only a tiny percentage of content ever goes bigger than its normal audience, and engineering it to do so requires skill, hard work, and usually more than a bit of luck as well. Be prepared for it to fail, but try to learn from every failure and improve for the next attempt.

Holy crap, it worked! Now what do you do with all the traffic, attention, etc? You’d better have a plan, because if something does go viral, it moves very quickly (which is kind of the point). Don’t get caught stammering and stuttering when the interview requests start coming in. You built this to go big, didn’t you? So you need to know exactly why you did it, exactly what the goal is, and exactly what you’re going to do with all the attention once you have it.

There’s always the one-off stuff that goes viral on the web, and we all wonder why. The truth is, no one really knows. But if you’re intentionally building something to go big, especially in written form, it has to be good. I-spent-ten-hours-on-that-blog-post good. Make every idea, every word, every image, serve a specific role in the piece. Take your time and do it right. The more time you put into the beginning, the less work marketing you have to do, because the best content sells itself. I started the Lincoln fire with one tweet and a dozen DMs to friends – the content was strong enough to do the heavy lifting for me.

4. Create something that the highest percentage of people can identify with.

The point of going viral means that a ton of people have to share it, right? So, whether you’re building for a niche or for the world at large, make sure you’re putting together something that the vast majority of people in that group can identify with so much that they’ll want to share. It seems like a no-brainer, but actually sit down and think about this before you begin creating the piece.  You’ll be surprised at how much it helps.

It’s really easy to find the best viral content on the web (obviously). Take advantage of that and study what works. List posts, for example. Don’t even roll your eyes at me – you know they work. My first-ever viral piece from 2009, when I was just a three-month-old blogger, was a list post. Shoot, Cracked.com still makes a killing selling list posts. Just look at their homepage.

6. Stay away from polarizing topics (unless you want the drama).

There are two ways to play this one, but 80% of the time you’re going to want to steer clear of polarization.  The exception is if all you’re looking for is buzz, and you don’t care whether it’s positive or negative. Then you can play the “polarizing topic” card. Usually, however, you want to play on positive/fun/interesting things. For most of us, creating a viral success where half a million people hate you is not a good result.

There you have it, folks – the top six rules I live by when trying to create viral content. Remember that it’s the same as anything else: the more you practice, the better (and luckier) you get. Have fun creating!

Guest author Nate St. Pierre builds stuff on the web . . . a lot of stuff. Once in a while he finds time to write, too. You can find him in his day job as a web marketing consultant, or building out philanthropy projects in his spare time. If you want to hear more of his inane ramblings, you can follow him on Twitter @NateStPierre.