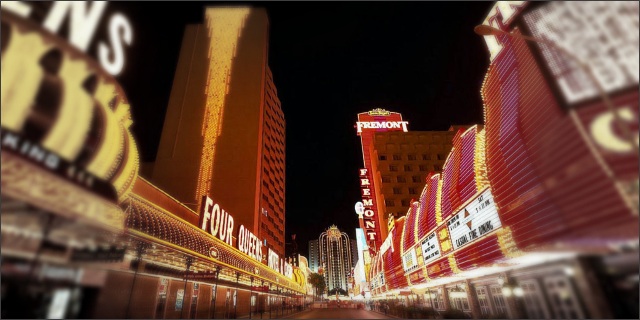 We’re at the monthly Downtown Project update in September, a lively affair at the Plaza casino. The crowd has sampled from a sushi platter in the back, and we watch moderator Jude Stanion take the stage. He starts off with a joke: today, we’re making serendipitous connections between raw fish and sticky rice.

The notion of serendipity is so ingrained in the Downtown Project’s philosophy that everyone laughs. Serendipity – random connections among people and ideas – is one of the core experiences that Tony Hsieh, the CEO of Zappos and head of the Downtown Project, wants to create in Las Vegas. You do that by increasing population density and building places where people can interact.

“Research has shown that most innovation actually happens from something outside your industry being applied to your own. And those are the results of random conversations at bars or coffee shops or just when you have collisions with other people,” says Hsieh, citing a book called Triumph of the City.

He’s already trying to cultivate serendipity at the Zappos headquarters. The office has only one entrance, so employees from all departments run into each other. And Hsieh has reduced the square footage per employee to around 120, less than average.

“Research has shown that when someone sits twice as far away from you in an office environment, you don’t see them half as often. You see them … a quarter as often,” he says. At the new downtown Zappos office, scheduled for completion at the end of 2013, Hsieh hopes to reduce that number to under 100 square feet per employee.

At Zappos’s interim office downtown, evidence of planned serendipity is everywhere. Employees have to walk several blocks – ample time for conversation – to get from the parking garage to the office, and everyone clocks in on the sixth floor. Big couches line the windows, perfect for impromptu meetings. Wires with outlets hang from the ceilings, rather than being rooted to the floor, so desks can be moved around at will. And the food options are different on different floors: seventh-floor dwellers have to come down to the sixth floor for salad, and sixth-floor dwellers have to head upstairs to store their brown-bag lunches in a communal fridge. 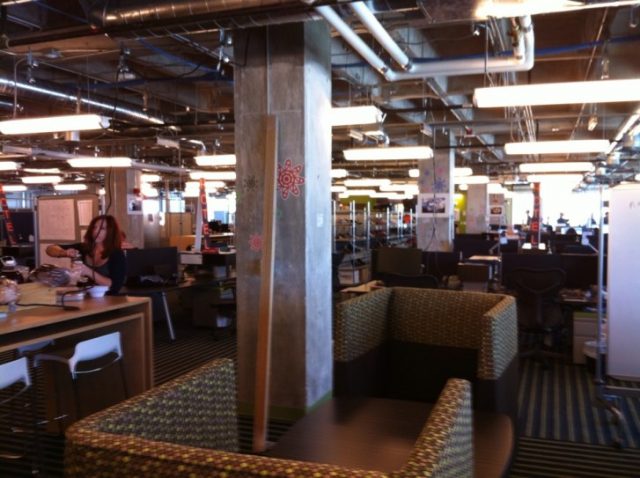 Zappos’s ping pong table is located near the technical department, so social manager Nate Luman took a trip there one day and ended up making a few friends. That makes it easier to approach them about projects in the future, he says.

Serendipity downtown is only just beginning, and much of it happens at The Beat coffeehouse or The Ogden apartment complex. The team at Fandeavor, a marketplace for exclusive experiences around sporting events, spends lots of time working at The Beat. One day they bumped into Jared Montz, a retired soccer player who runs an online soccer academy, and he introduced them to some of his contacts. “There’s no pretentiousness around here,” says cofounder Dean Curtis.

TicketCake, an event ticketing startup from Salt Lake City, got funded by the Downtown Project after attending a Tech Jelly, the weekly tech meetup. Now, they spend time at The Beat slurping back caffeine. According to CEO Joe Henriod, they’ve met some of their biggest customers there.

Across the street from The Beat, a new fashion boutique called Coterie opened in September. And even that will be a place for serendipity: owner Sarah Nisperos wants people to come hang out, have a drink or a cupcake, and get to know each other.

At the end of the night, many Zappos and Downtown Project employees head back to the Ogden apartment complex. “These are the friendliest elevators in America,” says Julie Yeats of Digital Royalty, a social media consultancy with offices in the Ogden. “The elevator’s definitely like the magic spot,” adds her colleague Jessica Smith.

Jody Sherman of EcoMom, another Downtown Project portfolio company, says he makes random connections “every frickin’ day.” Once, he stepped out of the Ogden elevators and came face to face with a friend from San Francisco; another time, Hsieh invited him to join a walking tour and he ended up talking to a reporter.

One of the reasons this works is because the Vegas community is still so small – small enough to appreciate serendipity-sushi jokes. “I think in the Bay Area there’s a lot of noise and it can be hard to meet people,” says cofounder Jennifer Chin of LaunchBit, who just moved to Vegas. One of the challenges of the Downtown Project will be to grow the resident population but keep that friendly, open, “unpretentious” community vibe. Because if your neighbors aren’t willing to talk to you, there can be no serendipity.