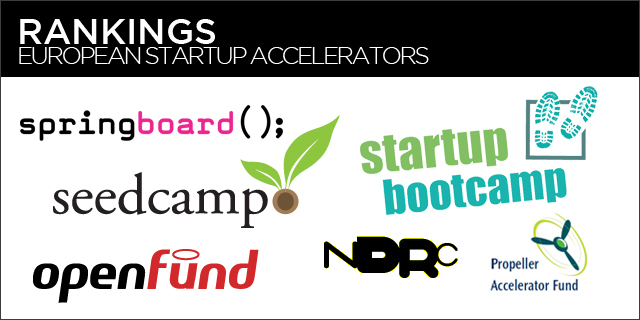 Last month we shared a list of the top ranked startup accelerator and incubator programs in the United States. Through most accelerators and incubators, startup teams receive mentoring, guidance and a small amount of funding in return for a small stake in the company. With all the startup accelerator programs popping up across the globe, we thought it seemed appropriate to go across the pond to share a snapshot of the best European programs for the time, money and effort spent.

As a part of his field work for the Kauffman Fellows Program (not to be confused with Kauffman Foundation), Aziz Gilani from DFJ Mercury, working in partnership with Tech Cocktail and the Kellogg School of Management, produced our U.S. rankings. Assisting in the evaluation efforts were Professor Yael Hochberg and MBA Candidate Kelly Quann from Northwestern University. For the European version of the study, Milano, Italy based venture capitalist Gianluca Dettori performed all of the research and evaluations. He interviewed numerous VC’s, Angels, and program graduates and then aggregated the data. This is just a snapshot, first high-level published list of the findings. On Tuesday, Gianluca will be sharing some of the details of his findings at the NESTA: Startup Factories event in London.

Before we dive into the European rankings, it is important to emphasis that while there are a number of accelerator-like programs in Europe, there were only a handful that matched the strict criteria set forth by the researchers and applied to the U.S. rankings. It was also observed by the team that Europe's accelerator systems are a few years behind those in the U.S. and while the U.S. is one single market, European innovation ecosystems are like islands, loosely connected.

The Top Eight
Even though it is way too early to measure and rank some of these programs, we still thought it would be worth the exercise as a base for future analysis. After compiling an initial list of accelerators we were able to determine the following rankings for the top 8 startup accelerator programs in Europe. Seedcamp, the London-based program, took home the top spot as they look to offer startups a jumpstart with their “Seedcamp Week” and various programs around Europe. Seedcamp offers startups funding and three months of mentorship. Startupbootcamp Spain took second, followed by its Startupbootcamp counterpart in Denmark. Startupbootcamp is a relatively new European startup accelerator network and an affiliate of TechStars (now part of the TechStars Network). Springboard, a Cambridge-based accelerator, took fourth place as they provide seed capital, office space and its “smart-community” with mentors and other entrepreneurs. The top five were rounded out by the Openfund which has the sole support and significant investment of the Piraeus Bank. NDCR Launchpad was Ireland’s first accelerator program, focused on supporting digital entrepreneurs and start-ups with a three month program, and up to $20,000 Euros in seed funding. Propeller Venture Accelerator Fund took seventh and is run by Dublin City University's Ryan Academy for Entrepreneurship. Finally, the young program Startupbootcamp Ireland took home eighth place.

Here are the top 8 in order.

Editor’s Note: This is an very early look at the European startup accelerator and incubator landscape. There were some programs excluded from the rankings because they did not quite meet the same criteria set forth in the U.S. rankings. Also keep in mind that the research team’s for the U.S. and European rankings were different and used slightly different criteria. If you feel there is a program that is missing from the rankings please feel free to comment on this post so that Gianluca Dettori, who performed the European study can see your replies, comments and feedback and reply them appropriately.