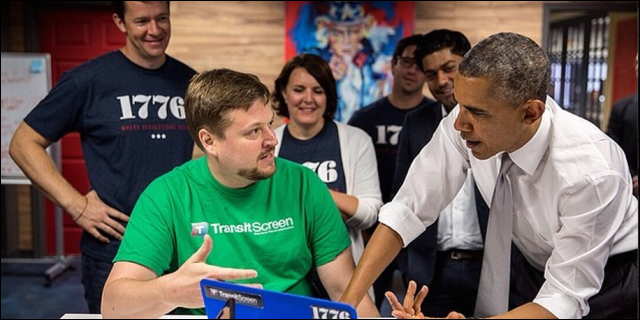 The Washington D.C. area has a deceptively large number of transportation options.

Metro, bikeshare, and city buses, of course, but what about the D.C. Circulator busline or the Fairfax Connector buses? Is Car2Go actually the best way to get downtown in a hurry? Is there a way to provide this information that would push commuters toward more sustainable transport usage?

The answers to all of these questions eventually worked themselves into a product called TransitScreen, which was an open-source software development created out of Mobility Lab’s tech-fellowship program three years ago.

TransitScreen CEO Matt Caywood led that effort at Mobility Lab because he and co-founder Ryan Croft (they now also have a team of programmers) weren’t satisfied with the landscape of apps that provided information for one specific mode of transportation and were all smartphone dependent.

“We thought there was really an opportunity … to develop a utility with signage that included bikeshare, carshare, rideshare,” Caywood said. They even added weather reports, an essential for would-be bike commuters deciding if they can make it home before a downpour.

The eventual prototype – a stand-alone, flat-screen display connected to a web-accessible application – was launched in D.C. and Arlington, Virginia in 2012, and expanded to the San Francisco Bay Area in 2013. Caywood’s team has gotten these screens placed in large office buildings, university buildings, and private apartment buildings – really anywhere a private business or municipal government wants to place them.

“Both regions have a very large number of public-transit carriers and are very fragmented in some ways,” Caywood said. “You don’t have to go far before you're riding on a completely different transit service.”

There are now about 100 screens located in 12 cities across the U.S. President Barack Obama even got a demonstration during a recent surprise visit to 1776, a D.C.-based business incubator where TransitScreen is headquartered.

But there is one remaining question that hasn’t been answered: Is TransitScreen helping commuters make more sustainable options? Caywood said TransitScreen is working with a transportation planning firm to kick off the first such study using data from Seattle, which currently has 15 TransitScreen locations. (Clients who have purchased TransitScreen get both the physical screens and access to the information online.) In the meantime, TransitScreen is currently wrapping up a study on how people use the screens and web application. This study is expected to be released in January, possibly in time for analysis at the January 10 TransportationCamp DC, an unconference hosted at George Mason University’s Arlington Campus.

Even if the study isn’t available in time for the conference, Caywood said he is interested in discussing with TransportationCamp attendees the changing data standards being used for transportation planning and how TransitScreen can better integrate the more informal carpooling and vanpooling networks – and dockless bikeshare systems like Social Bicycles – that are popping up in different metropolitan areas.

“I've been to every D.C. TransportationCamp so far and I think, in some ways, it’s just gotten better and better as more people become aware of how valuable it is to have an unconference,” Caywood said. “A broader cross-section of transportation [thinkers are] attending now than what was represented at the beginning.”