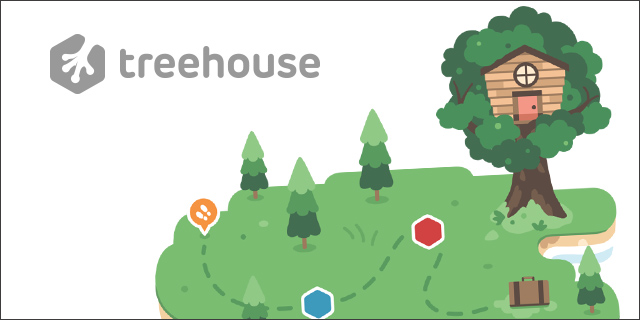 Today, Treehouse launched an iPad app so you can learn programming from the comfort of your tablet.

Treehouse helps you learn Objective-C, HTML, CSS, JavaScript, PHP, Ruby, and SQL with over 1,000 videos made by real teachers. Then, you can practice right inside the app with Treehouse code challenges. This model has already attracted 37,000 active students.

The app has a special keyboard with common coding symbols to make programming on the iPad easier. Students earn points for lessons they complete, so employers can tell when they’re job ready.

But Android students will be disappointed to learn that the iPad app contains none of Treehouse’s Android content – founder and CEO Ryan Carson says Apple prohibited it.

“They said, ‘Oh, you teach Android, we can’t approve this app,’ and that seemed crazy to us,” says Carson.

Apple told him it broke the App Store guidelines by “promoting a competing platform,” says Carson. Looking at Apple’s documentation, the only guideline that seems to fit is 3.1: “Apps with metadata that mentions the name of any other mobile platform will be rejected.”

“There’s some really weird behavior going on,” says Carson, claiming that the iPad apps for Lynda.com and Udemy have Android content. “We don’t know if it’s just a random oversight by Apple or if there’s something worse going on.”

“We don’t want to make Apple out to be the bad guys, necessarily,” he adds. “We got through it.”

Apple did not respond to a request for comment.