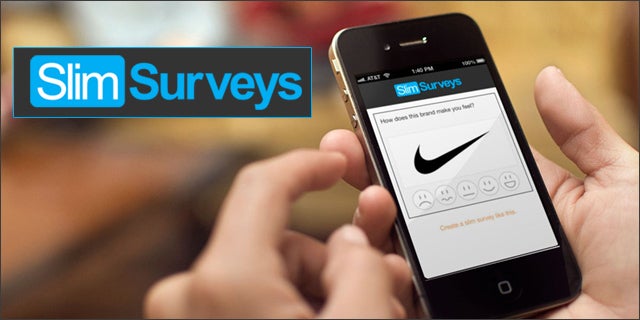 In life, some of us have initiative, and some of us have Initiative. If the distinction isn't clear: presuppose that a capitalized letter on a common noun denotes “[noun] to a greater extent” or even just “[noun] squared.” For the cofounders of SlimSurveys, this Initiative comes in the form of starting a company…using lessons they learned from previously starting, running, and then selling their first company.

After being acquired by Lockerz, the founders of TweetPhoto [Plixi] stayed on for (approximately) another two years. Sean Callahan and Rodney Rumford couldn't hold still, though, and they just knew (based on their great relationship and complementary tech skills) that they'd eventually start another company together.

“We spent a month researching big problems on the Web – could we build something that could actually solve a problem? That's how [we] came up with surveys,” says Rumford.

Alongside TweetPhoto colleague and former CTO Daniel Marashlian, the three started SlimSurveys. SlimSurveys allows users to create short, simple surveys that can be completed in 30 seconds or less from the Web or any mobile device. This is done primarily by providing survey makers room for only seven questions. When designing SlimSurveys, Callahan, Rumford, and Marashlian conducted a lot of prior research and testing, as well as utilizing lessons they learned from their experiences running TweetPhoto.

“It became obvious to us that: surveys take too long, they're no good on mobile devices, they're [often] too complicated, and they suck,” says Rumford, talking about interviews they did during the research phase.

Coming from TweetPhoto, they were confident in their knowledge of two things: real-time Web and mobile experience. With over 300 companies competing in the survey space (including behemoth SurveyMonkey), the three founders knew that they would need to create a product that focused on the consumer (i.e. our patience or time, as well as our penchant for simple or simplifying tasks). For SlimSurveys, they adopted a strategy that they learned from their time at TweetPhoto, and focused on micro-interactions – the ability for people to give feedback without having to do a lot of work (e.g., Facebook “like”) – to drive SlimSurveys' design.

According to Rumford, “Our focus, from day one, was on the user experience. What sort of questions can we build, so people can easily and quickly tap to respond?”

The user experience is the most important lesson the trio learned from TweetPhoto, and it is a persistent concern at SlimSurveys. Prior to official release, the company collected over 500 data points of feedback from 275 beta testers. The founders emphasize this need for constant feedback because they empathize with the experiences of the user and truly want to improve those experiences.

Rumford, remarking on the short survey format (and perhaps even alluding to human existence itself), says “it's the brevity of the experience; there's some magic in that brevity.”