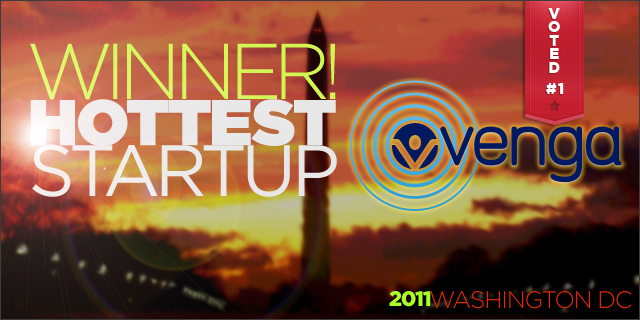 When you think of tech startups in DC, you probably think of LivingSocial as they are one of the fastest growing startups in the country. But we wanted to see who our readers thought the hottest early-stage, up-and-coming startup in the DC region might be, so we selected over 50 companies and put them into a week long poll. The poll captured thousands of votes as the community voiced its opinion on startups from across the DC region which included companies in DC, Virginia and Maryland. After the smoked cleared from this heated battle, Venga was voted the hottest early-stage startup in DC collecting 19.29 percent of the votes. Venga offers a mobile application on iPhone and Android that provides exclusive offers, specials, happy hours, music, and events at restaurants, bars, and nightlife venues near you. Venga participated in our 2011 DC Tech Cocktail winter mixer event.

After learning they took top honors in our poll, Winston Lord, President of Venga had this to say:

“We are honored to be chosen as Tech Cocktail’s DC hottest early stage start up and thankful to our loyal users for voting for us.  In a community that has so many great start ups, we are humbled by the recognition.  We applaud Tech Cocktail for doing such a great job at fostering and developing this community.”

Coming in second with 15.64 percent of the vote was Snack&Munch followed by HelloWallet , collecting 11.01 percent of the votes. Fourth place was taken securely with 6.6 percent of the votes by SeniorChecked. Personal rounded out the top 5 with 5.48 percent of the poll votes. The rest of the top ten included: TroopSwap, Canvas, thestrEATS, Locl.ly and “Other” write-ins. The top ten early-stage startups include two companies that have been funded by Grotech Ventures – HelloWallet and Personal. Nearly all of the top ten early-stage startup companies have participated in a Tech Cocktail event so it's great to see them all doing well in the eyes of the community. Interestingly, the most common “Other” write-in was a company called: EventFarm, which offers an alternative to Eventbrite or TicketLeap for online event ticketing.

Congrats to all the DC area early-stage startups that were listed in the poll. You are all doing great things and we look forward to hearing from your teams throughout the year with your latest tech innovations and achievements. Check out the breakdown of the votes below.

We did a similar poll in Chicago – check out the hottest early-stage Chicago startup.