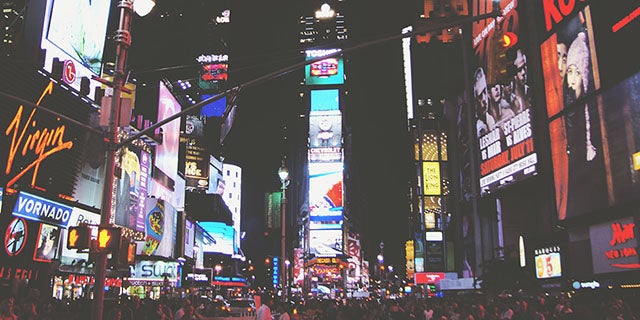 Just in case you're not lucky(?) enough to find yourself in Times Square tonight for the New Year's Eve celebration in New York City (or if you do happen to live in the city and just, you know, don't want to bother having to deal with that crowded mess of a hell hole), you can still catch everything that goes on tonight via a live, commercial-free webcast. According to co-organizers, Times Square Alliance and Countdown Entertainment, people from around the world can tune in to the Times Square New Year's Eve webcast on Ustream.

This is the sixth time that the Times Square New Year's Eve event is being webcast, and similar to past years, the viewership is expected to be high; last year, the webcast brought in more than 1.5 million unique viewers from more than 200 countries. At 6 PM EST tonight, the Ball Raising ceremony will begin and will be followed by various live musical performances, hourly countdowns, behind-the-scenes stories, and interviews with various celebrities (very typical for your New Year's Eve celebration event, duh).

The Times Square New Year's Eve webcast will begin on Ustream at 6 PM EST and end at 12:15 AM EST on January 1, 2015. The webcast can also be watched from Android and Apples devices using the Times Square Ball App and Times Square Crossroads App. Or, you can even bookmark this page and keep an eye on it straight from here: