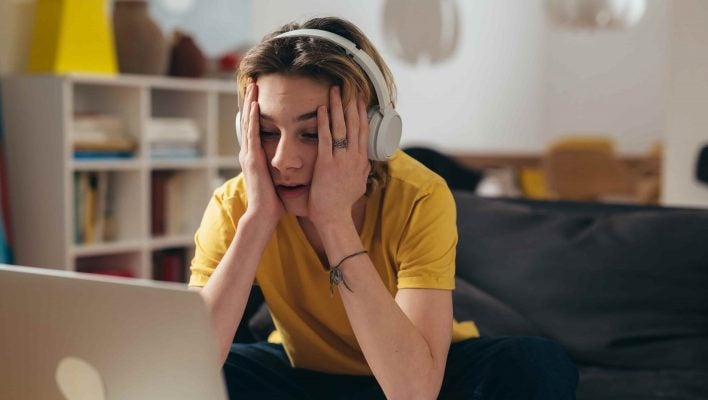 The mass shift to remote working has transformed workplace communication – and aspects of our working lives that require a little more empathy than your average conversation seem to be among the most drastically affected.

Electric scooter company Bird kicked off the pandemic by laying off over 400 workers – a third of its entire payroll – in a two-minute Zoom call via a reported “robotic-sounding, disembodied voice”. Other companies – such as Uber – quickly followed suit.

Then, in December 2021, Better.com boss Vishal Garg fired 900 employees in one go, via video call.

But even as the pandemic has waned, the practice of firing employees via Zoom seems to be staying put.

In March of this year, for instance, UK shipping company P&O Ferries was taken to task after ruthlessly sacking 800 employees remotely, some of whom had the news broken to them by a pre-recorded video call.

Then, in May, online used car retailer Carvana announced it was sacking 2,500 members of staff, many of whom were invited to Zoom calls before being told they’d been axed.

Organizational Psychologist Dr. Isabel Bilotta, now a Senior Consultant at Deutser, believes that a lack of interactional justice – the degree to which people impacted by decisions perceive that they were treated with dignity and respect – is likely to be diminished on video calls of such size.

“I would anticipate that when remote terminations are conducted in particularly impersonal ways – for example, with several layoff victims on the same call, as in the case of the Bird or Better.com cases – interactional justice will be greatly impacted” she explained.

“In these types of situations, employees are not afforded the opportunity to ask questions about their termination, to engage with their managers individually, or to identify the true cause of their termination given that several hundred people are on the same call at once.”

Dr. Bilotta points out that remote terminations don’t necessarily have to lead to diminished interactional justice. But of course, if individuals’ feelings aren’t prioritized during the process, it can quickly become disorientating.

Amy, who didn’t want her full name to be used for this article, found the long, drawn-out process that preceded her 2021 redundancy from a tech agency via a string of confusing video calls extremely stressful.

After being told to attend a company-wide conference call, Amy’s former company “said they were going to read a letter out that someone had written. They apologized for it being robotic, but said they just wanted to get out the info.”

“They then read the letter out. They didn’t mention any roles at all, just that they were making redundancies. The meeting ended and I said to myself, ‘I’m just going to have to sit here now and be really confused’”.

“Then I got invited to the meeting with my team” she continued, “five of us, plus an HR person.”

Amy was then notified she was being put into a “redundancy pool” where she’d be scored against her fellow employees. The news that she was to be let go was broken a full two weeks later via another scripted video call.

Yet it’s not just the sheer number of people in these Zoom calls – or the number of calls themselves – that make Zoom layoffs particularly painful.

Technical issues can make individuals feel alienated from the redundancy process too – precisely what happened to a large proportion of those 2,500 employees recently axed from Carvana’s payroll.

“Many people experienced extensive tech glitches with the Zoom, so they weren’t let into the meeting until the end. People were so lost and had to reach out to leadership to confirm if they were fired or not” one laid-off employee told Forbes.

It's doubtful that employees who have to seek out confirmation of the termination will feel justly dealt with.

Glitch-free one-to-one calls, on the other hand, aren’t necessarily any better – particularly if managers refuse to do the basics like turning their cameras on.

Coritta Lewis, who was fired from her job at a hospital on Zoom during the pandemic, had some idea she was going to be laid off, but not in the impersonal way that she was.

“The company had laid off nearly 200 other employees, and being the youngest and least experienced person on my team, there was a feeling that if there was a layoff, that I would be it” she explained. “…nevertheless it felt very impersonal. We weren't on camera, which I think made it easier for my former manager, but it made it feel a little cold.

Rosa, a London-based interior designer, had a similarly cold experience amidst worries about furlough at the beginning of lockdown.

“Three months into furlough and a month and a half into my new [job], I got a message asking to chat on a specific day from the HR manager. They started telling me that they were thinking about making me redundant and they have an upcoming meeting in the next couple of days.”

“I joined the call, and the HR manager and the CEO were both on the call, both without the camera on, so I didn’t put mine on,” she remarked. “The CEO reiterated what the HR manager said, which was that because of workload they have to make some redundancies, and your position is made out to be redundant.”

To make matters worse, Rosa said the company “cut [her] out of the server just days later so I wasn’t able to access my work.” Although she was able to retrieve her portfolio, it “was a much longer process and delayed me finding a new job, which caused more stress and anxiety.”

There’s still no guarantee that such a conversation would have gone smoothly even if Rosa’s manager’s camera had in fact been turned on.

“Communication over Zoom, although it feels like a face-to-face interaction, is not. Eye contact is impossible to establish” explained Dr. Tessa West, Associate Professor of Psychology at New York University and author of Jerks at Work: Toxic Coworkers and What to Do About Them.

“Most people, especially when they're nervous, look at themselves on screen, not their interaction partner. My guess is these folks are missing the dyadic nonverbal behaviors that make awkward interactions like these go down more smoothly.”

Considering that terminating someone’s employment can be a difficult process wherever it takes place – and that it’s generally accepted that discussions in remote environments don’t always go as smoothly as it does in real life – what makes certain bosses treat these processes with such little sensitivity?

“One simple explanation for this is that it reflects a failure perspective-take,” Dr. West said.

She continued, “when we get stressed and overwhelmed at work, that failure is exacerbated. And on top of that, recent research shows that people don't feel as connected to the workplace (and their fellow employees) as they did when they worked physically in the same space. All these things combined can lead to a failure of bosses to treat this issue with the sensitivity it deserves.”

Certain bosses’ subconscious – or conscious – prioritization of their own feelings over those of the employee they’re firing could also be a factor in explaining apparent empathy deficits.

“Layoff agents often feel distressed and sorrow and may cope by distancing themselves from the layoff task itself and from the layoff victims” Dr. Billotta points out in a paper published during the pandemic.

Elaborating for Tech.co, Dr. Billotta pointed out that even when video conferencing technology is used, managers “are physically separated from the employee and will not have to handle this difficult conversation in-person, potentially allowing managers to move on from these conversations more easily.”

On Zoom, there are multiple ways for managers to distance themselves from the pain experienced by individual employees – such as firing them en masse, or not turning their cameras on.

This is exacerbated by the fact Zoom is a communication medium where they should be especially attentive to employees’ concerns, considering the fact that those dyadic nonverbal behaviors Dr. West referenced become harder to detect.

The ‘Right' Way to Fire Someone

So, the question still remains: is it possible to fire someone on Zoom the right way?

“Communication is critical,” Dr. Billotta told Tech.co. “When companies handle layoff decisions with transparency and provide sufficient detail, employees have a greater understanding of the how and why behind layoff decisions, fostering perceptions of fairness.”

Tim White, CEO of MilePro – who has experience terminating employees over Zoom – highlights the importance of being kind, as well as ensuring you’re prepared.

“Once you've relayed what you need to say, give your employee the opportunity to speak,” he said. “Once they've had their chance to speak, and you've answered any questions, don't prolong the call.

And, if at all possible – just don’t fire people in groups. “Interactional justice could be strengthened by…ensuring they are conducted separately for every individual employee,” Dr. Bilotta suggested.

With so many companies now permanently remote and many businesses offering flexible work arrangements, there will be situations where firing someone on Zoom is the only way to break the news to them.

Being aware that it’s much more difficult to make people feel valued and heard through video conferencing channels than it is in real life – as well as listening, giving employees time to express their opinions, and treating them as individuals – will go some way to cushioning the blow.