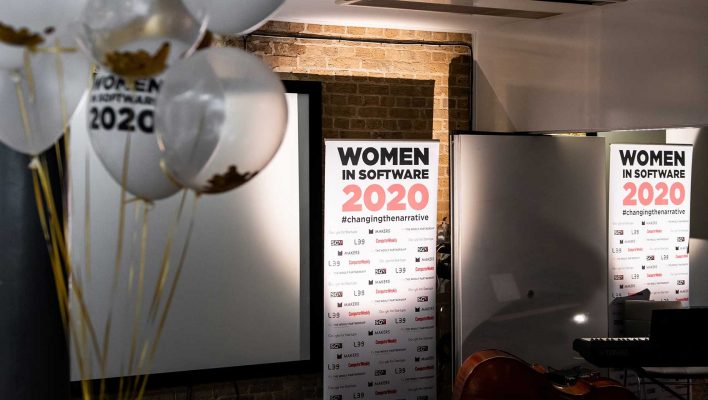 “I know how scary it is to venture out alone, but you'll soon realize how many more women are out there, just like you, trying something new.”

Visnja Drinjovski is a ballerina-turned-web developer making waves in an arena traditionally dominated by men. In fact, Drinjovski's achievements as a senior engineer at MVF have seen her shortlisted on the Women in Software Power List 2020.

We spoke to Visnja about her career, what it's like being a woman in tech, and what it means to be shortlisted.

“Tech’s gender problem gets a lot of airtime: the complaints, the harassment, the obstacles,” says Adele Barlow, head of content and comms for Makers, the company behind the Power List. “What gets less acknowledgment: the solutions and the incredible people (who happen to be women) already doing amazing work.”

The problems that women face while working in the tech industry are well-documented. Stories of harassment are, sadly, all too common. However, according to Barlow, the Power List is designed to celebrate and showcase the female rising stars in the UK's coding community.

Women certainly lack visibility in Britain's tech industry — according to PWC, less than a quarter of A-Level and university students can name a famous woman working in technology. Perhaps more concerning is that while one-third of male British students have had a career in technology suggested to them, just 16% of female students have been offered the same suggestion.

“I must say, it [working as a web developer] wasn't something I thought I could ever do,” says Drinjovski. “They say the tech industry is male-dominated and I am very often the only woman in the meeting. It wouldn't be true if I said I didn't feel the pressure, especially as an introverted woman.”

From Dancer to Developer

“When we were kids, we didn't have the luxury to travel and our freedom of movement was limited, so we were pretty much in Serbia all the time.” says Drinjovski. It was here that Drinjovski trained as a ballerina and joined the renowned Serbian National Theatre.

“As a ballerina you work hard every day, six days a week to perfect your moves and, maybe, after two to three months you are a bit closer to perfection,” she says. “I was taught hard discipline from the age of 10 – I went to ballet school and danced for 15 years of my life.” This intensity, however, would prove too much and Drinjovski left the national ballet in search of another career.

“Before stepping into coding I have tried other professions as well but couldn’t see myself doing it for longer than a few months,” she says. “So I kept searching and by chance got interested in web programming. I never looked back.”

Without the funds to pay for a university course in programming, Drinjovski watched YouTube tutorials which aligned with the course's curriculum from her bedroom. “Yes, it was hard,” she says. “But what kept me motivated was the final goal. I had a vision of what a few months of really hard work and studying would bring me in the end — a better life with more choices to make.”

The hard work paid off, with Drinjovski landing a job with MVF in September 2014. “As children, we always dreamed about how it is to live in Paris, London, or New York. I was such a dreamer that, even after living in the UK for six years, I still have to pinch myself from time-to-time.”

Three promotions later and Drinjovski is one of the most senior engineers at what is, according to the Sunday Times, the best company to work for in the UK. “She's had a huge impact on our publishing brands,” says Michael Johnson, MVF's chief technology officer. “As is clear from Visnja's incredible story, she is no stranger to hard work or learning new skills and this… makes her a really formidable member of our team.”

“I don't really buy into the 'empowering women' schtick,” says Barlow. “We are not little girls who need gold stars and stares because ‘wow we're women AND we can do great work (?!)' — instead, I believe in elevating women. In this case, shining a spotlight on the rising stars within tech.”

Alongside Drinjovski in the running for the award are 39 other women working for companies as varied as the Financial Times, Vodafone, Ford, Facebook, and Monzo.

“When you set high goals for yourself it takes time to realize everything you envision,” says Drinjovski. “On the back of such achievements there's a lot of ups and downs one needs to go through, so it feels really good and rewarding to see that my hard work is being recognized by others.”

“It is frustrating hearing about all the problems non-white non-males are having in tech,” says Barlow. “Experiencing and witnessing invisible sexism, misogyny, the gender pay gap, a lack of role models, etc…it’s tiring. That's why it can be uplifting to celebrate the counter-narrative: while change might be slower and more gradual than we'd like, at least it is happening.”

So, what advice would Drinjovski give to a woman considering a career in tech?

“Go for it. And ask yourself what's the worst possible thing that could happen. To fail? Well, that's not so bad at all. Failure is the opportunity to learn. As a ballerina, I fell down on the stage in front of a full theater. What people commented on, though, was how fast I picked myself up and continued dancing — much faster than on my way down. I'm kinda proud of that.”