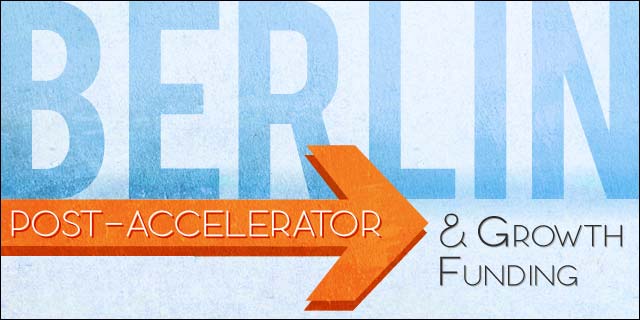 A couple of weeks ago, a colleague and I went on a trip to Vienna, Austria to deliver a keynote to a state-funded innovation agency to discuss entrepreneurship and the role of mentoring. One of the key points that came out of that discussion was the role of accelerators and the state of growth funding in Europe's central hub – Berlin.

It seems that every few months, there is a new accelerator or incubator popping up. There are now over 10 industry-focused accelerators/incubators in Berlin alone scooping up startups in healthcare, hardware, media/publishing, ed-tech, enterprise SaaS, real estate, e-commerce, and even rail logistics. While many startups are finishing classes (accelerators) or much longer programs (incubators), there are very few able to raise substantial seed (growth) rounds or Series A rounds.

To conjecture why this might be the case, it is important to start with a critical distinction between the accelerator class model and the incubator model in Germany. The former is usually three months long. Its usually modeled after TechStars with funding of anywhere from 15k to 25k for equity ranging from 5 percent to 8 percent of equity. The latter is much longer, usually is more hands-on, and is an extension of a company or fund (more about this later). The biggest difference in the accelerator model in Germany vs. in the US is that while US accelerator (TechStars network/YC) startups have automatic access to convertible notes (100k/80k), German accelerators do not, which poses a growth challenge for companies after their jumpstart.

Lets briefly look at the state funding environment. A recent report produced by the Berlin Department of Senate showed a plethora of funding options. If you look much closer, while there are one or two university affiliated grants, most are debt financing options or subsidies with stringent working capital requirements. This underscores much of the EU landscape – aversion to risk. A recent post by Inge Geeerdens  sheds some light on this issue.

More important is how the private sector – German VCs – view startups and what they are willing to fund. While Rocket Internet's incubation model is an outlier, it has gained precedence and sheds some insights on how much risk VCs here will take. While we are in 2014, this blog post written two years ago from Jason Jozefak, a Germany-based venture capitalist, is still very relevant. Martin Varsavsky summarized it succinctly in this post where he states “funding is more complicated in Berlin because Germans have a natural aversion to risk, which in turn makes it hard for their financial system to find a good way to consistently finance failures.”

To control for risk, the trend in Germany is to micromanage ventures in an incubator-type model, .i.e, Atlantic Ventures, Epic, Team Europe, Project A, or HitFoxGroup. And to that effect, some of them have managed to hack growth with portfolio companies that are tightly structured on business models in the US.

Of course times are changing and London VCs want in on some of the Berlin action. But it’s Europe after all, and startups need to show growth with limited seed funding to gain follow-on rounds and eventually prove their Series A worth.

Perhaps US-based funds will come to the rescue.

Chaney is Founder and CEO of VendorMach, a supply chain trust scoring platform. Former technology integration and risk product lead at Humana Inc, he is a sought after speaker on big data and AI trends. He has degrees from Booth, Kings College London and Howard University.