Time tracking and logging hours isn’t something that most employees look forward to. Approached incorrectly, it can be a last-minute task based on guesswork and with large room for error. Enter Timely, a time management app that promises to remove all the pain of time management by doing it for you, automatically.

The creator of the Timely app, Mathias Mikkelson, and CEO of Memory, is very confident that his tool could change our perceptions of time logging, and help people bring genuinely transformational efficiency to their working day.

We caught up with Mathias to discuss what the app can do, how the company got off the ground, and the most effective ways we can wrestle control back from the clock.

What is Timely, and What Data Does it Track?

There are numerous time management or tracking apps out there, but as Mathias will be quick to tell you, the unique factor of Timely is this Memory function. This is the core idea behind the app, and what distinguishes it from its competitors.

Memory keeps track of exactly what the user has been doing. For example, it can log which apps the user opens and uses throughout the day. This helps build a more complete picture of an individual’s working day, and removes all the guesswork.

This not only eliminates the need to enter projects manually, but also gives its AI the raw data to effectively identify and group tasks, realistically recording how long they have taken. Over time it will automatically identify projects, based on the user’s previous activities. This can prove invaluable for the user, as well as the company they work for, when it comes to understanding where time is spent, and how to optimize the work day.

With Timely tracking everything that a user does, naturally concerns around privacy come up. While some may baulk at the idea of having their activities tracked in this way, only the user them self has access to this information. While a company can see the headline report of the sort of time that certain tasks are taking its employees, it can’t drill down into the more granular data to find out exactly what staff are doing minute to minute. And neither should it, argues Mathias.

“The company that pays for the account doesn’t own any data in the Memory timeline. When we talk to large companies, we have been asked for that data, but we don’t want to build a big brother tool. We will never share that.”

The Benefits of Using Timely

In giving users a more accurate image of the time they spend on a project, Timely is a useful tool from everyone from the individual freelancer, to large multinational companies with thousands of staff.

Mathias discusses the example of a freelancer billing for their work. “Imagine underselling the thing you do, thinking a job won’t take three hours, but ends up taking twenty”. Timely will record the actual time a task takes, which not only means you can bill for the time you’ve spent on a project, but also take this into account in the future when estimating how much to charge for work. You can even share the data with the client or employer, if you choose to.

Timely can even catch the time that usually falls through the cracks – travel, meetings and conversations all form an integral part of any project, but often are overlooked. Timely sees it all, intelligently grouping them altogether.

The best user feedback that the company receives, Mathias explained, is when something goes wrong. “We had an instance recently where a bug meant that we had no data for a day. We were contacted by users who were very angry that they couldn’t see the timeline for their working day”. He acknowledges that the issue was quickly resolved, but having users so dependent on your tool that they miss it as soon as it isn’t available, is a nice problem to have.

Many companies are borne from a passion and love for a subject, although it’s something of the opposite for this Norwegian firm. Indeed, it was an intense hatred for time-tracking that spurned Mathias to start his own company, Memory.

Memory began in 2015, when Mathias was exasperated with a certain aspect of his daily work life: “I worked as a designer, and loved the job, but had this intense hatred of time tracking.” Mathias wasn’t alone. “All my colleagues did too, and, in fact, we weren’t allowed to have Friday beers until everyone logged their hours’.

This drove him to find a solution, which led to the Timely app as we know it today. That said, the road to get there wasn’t an obvious one. While Mathias tells me that he felt confident that this was a problem that needed solving, early on, he was petrified at the idea of creating his own company, and dealing with investors. He had read horror stories about pioneers such as Steve Jobs losing control of their companies in bad deals. With no investors, he instead freelanced for six months, splitting his time between paid work, and getting his company off the ground.

After some time, it became clear that Mathias was onto something, no more so than when he caught the attention of Facebook, who loved the concept of Timely so much, that they asked him to come and work for them. Despite his friends and families instance that this was the right move, Mathias instead rejected the offer, and put all of his time into Memory and Timely. “I wanted to build something of my own, so I sold my apartment and put all the money into the company, and left Oslo for San Francisco”.

Many tech start up dreams are made and crushed in the city by the bay, and for every Twitter, Facebook and Uber success, there are hundreds that don’t make it. Keen to learn from those closest to the heart of the tech start-up mecca, Mathias threw himself into the world of tech culture, and ended up in a “Hacker House” – effectively, a dorm shared by 13 like-minded people. This experience proved invaluable. “The tech scene in Norway was non-existent when I started. I learned a lot just from meeting other people.”

America turned out to be eye-opening in more than one way, too. It wasn’t just the technical knowledge that Mathias took note of, but also the differences in lifestyle. “Work-life balance is important in Norway, in the US, not so much. I could see a lot of things I thought could be improved, coming from a different society”. Mathias felt he had the solution, and that’s the impetus behind the company’s next app.

With a new-found confidence, Mathias returned to his native Norway and continued to build his company to what it is today. It’s quite different to that early incarnation in 2014, employing 45 people based in 20 countries. And yes, it does now have investors, having raised over $1 million to date. 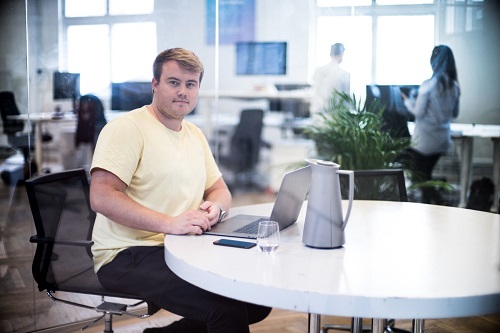 The Future of Timely

So what’s next for Timely? While Mathias and Memory are currently working on a new app that they’re not ready to reveal yet, there’s still plenty in the pipeline for Timely users.

One of the main goals the company wants to crack is managing time in the future. “Time in the past is rigid”, Mathias tell me, “where as time in the future is aspirational. You think you’ll spend x number of hours on a project, but it’s never correct”.

The goal then, is to intelligently use existing data from the past to accurately measure how long future projects will take. The idea is to make users more efficient and create more realistic timelines.

Long term, Mathias wants Timely, and Memory, to have a larger impact on the working world. “If we can help make 5% of the world more productive, that would be a good goal.”

Before the interview ends, I ask Mathias for his one killer tip about time management:

“Set aside one full day a week for creative focus time, with no Slack, no emails, and no distractions.”

As Mathias puts it, “Time is the most world’s most valuable resource. You can be as rich as you want, but there are still 24 hours in the day”. With apps like Timely and future projects, Memory hopes that it can give its users the tools to regain some control over their time.