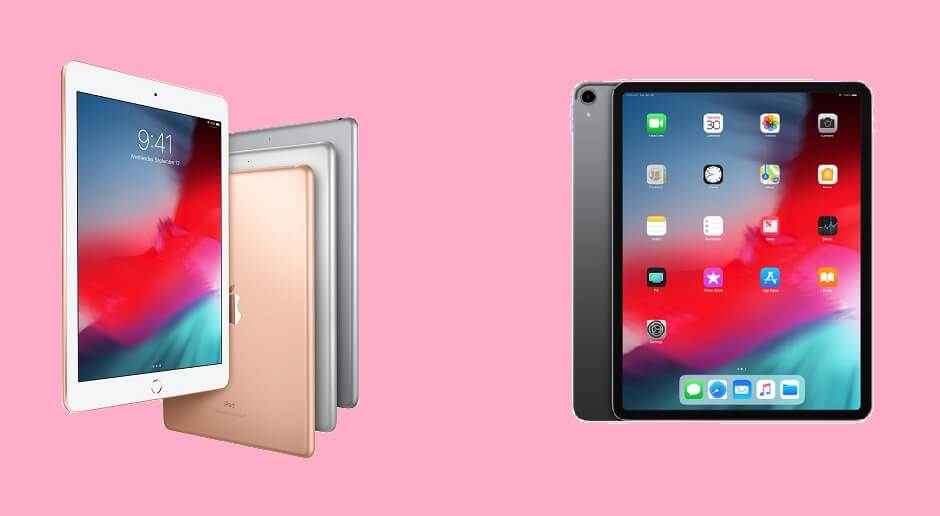 If you’re in the market for a new tablet, it won’t have escaped your notice that Apple’s long-established iPad is widely regarded as one of the best. However, a slightly trickier question concerns which model should you buy – the iPad 8th Gen, or the iPad Pro?

According to our research, the 10.2-inch iPad 8th Gen is the best you can buy for most users, given it offers great value as a compact but capable tablet. The iPad Pro, on the other hand, gives you a drastic redesign and a notably powerful processor, which will come in handy for those bigger projects, but is unnecessarily expensive for the average buyer.

We take a look at the models side-by-side, so you can see which one works for you.

iPad 8th Gen or iPad Pro – Which is Best?

Though they come from the same stable, the iPad 8th Gen, and iPad Pro are very different beasts. While they may look similar, their functions are poles apart, as indicated by their price tags – the iPad Pro will set you back at least twice as much as the iPad 8th Gen.

There’s no such thing a bad iPad, but there is certainly a right iPad for you. Whether to grab an iPad 8th Gen or an iPad Pro depends entirely on your needs and budget:

If you’re after an iPad, it’s worth knowing that you can’t really go wrong with either the iPad Pro or the iPad 8th Gen. All offer Apple’s trademark attention to detail and pleasing level of polish, and offer more than enough power for the average user.

The Pro excels for creatives and professionals, although we’ve noted that updates to the standard iPad that allow for the use of the Apple Pencil, and the Smart keyboard have somewhat narrowed the gap.

The latest addition to Apple's ever-changing lineup was announced through a virtual event thanks to the pandemic, but the specs are as impressive as ever. The iPad 8th Gen is a direct replacement to the iPad 7th Gen (also called the iPad 10.2). The big difference lies in the processing power: While the older model still used the A10 Fusion chip, the 8th Gen boasts the far more powerful A12 Bionic chip.

What's the practical difference? The 8th Gen has a CPU performance that's 40 percent faster, along with twice the graphics capability, according to Apple. Plus, the A12 supports Apple's much-touted “Neural Engine,” a built-in component that powers machine learning abilities.

Aside from the chip upgrade, the 8th Gen shares a lot of specs with the 7th Gen: A 10.2-inch display, a 8MP Wide camera, either 32GB or 128GB of storage, support for the first generation Pencil and Smart Keyboard, and a USB-C port rather than a Lightning one.

The price tag is $329, which is the same price point that the last few generations of iPad have debuted at, making the 8th Gen an attractive option. It's the same abilities and pricing that users expect from a top-of-the-line iPad, but with a faster processor.

Apple iPad 10.2 8th Gen
The best iPad to choose for virtually all users
In Short 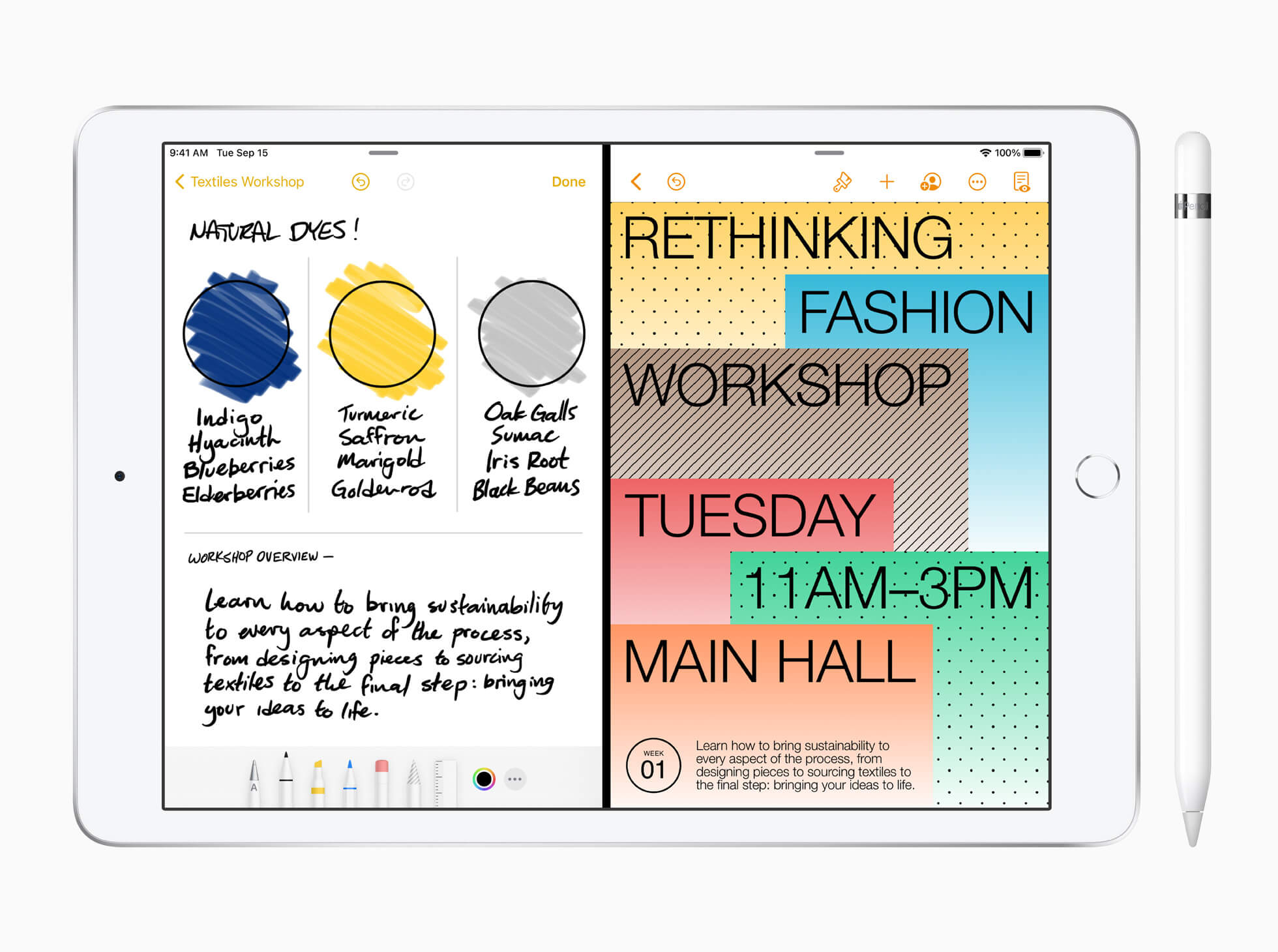 The 2020 4th Gen iPad Pro 12.9 has a redesigned camera, an A12Z processor (up from the A12x), and storage options that go up from 128 GB. It supports the Magic Keyboard and the 2nd generation Pencil, the stylus designed for drawing and annotating on the iPad screen.

What's the difference between the A12 and the A12Z chips? The A12 has 6 cores (2 performance cores and 4 power efficiency cores), while the A12Z adds two additional performance cores for a total of 8. In layman's terms, it's a little more powerful. That processing power lends itself well to multitasking and complex apps – hence why the Pro is favored by creative types. It can handle complex image editing and graphical work with aplomb, and naturally, that large screen really does make images sing.

The 4th Gen Pro 12.9 keeps the 12MP Wide rear camera from the previous Pro but adds another rear camera, the 10MP Ultra Wide.

iPad Pro 12.9 (2020)
A powerful tablet iPad best for business and design
In Short 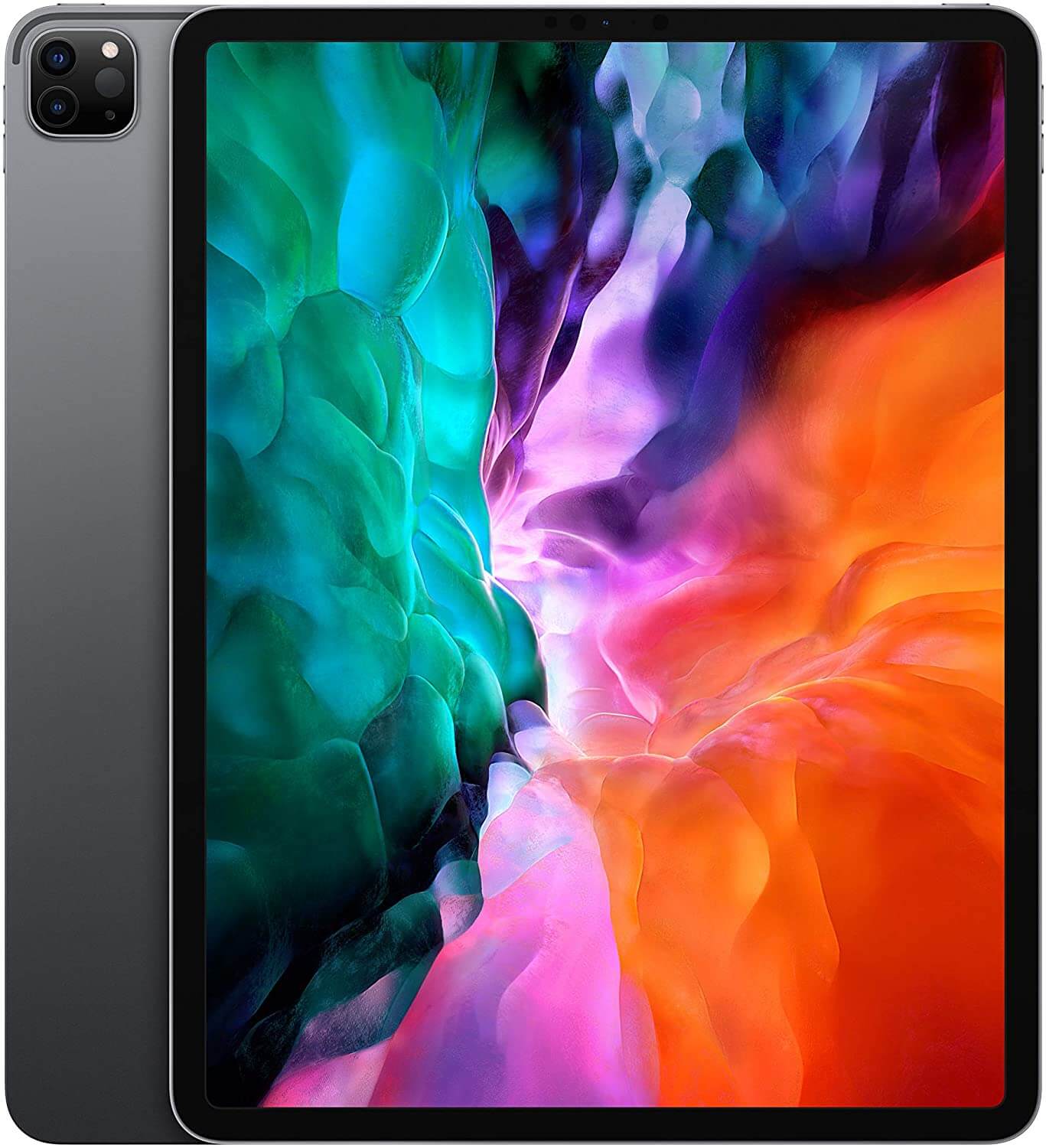 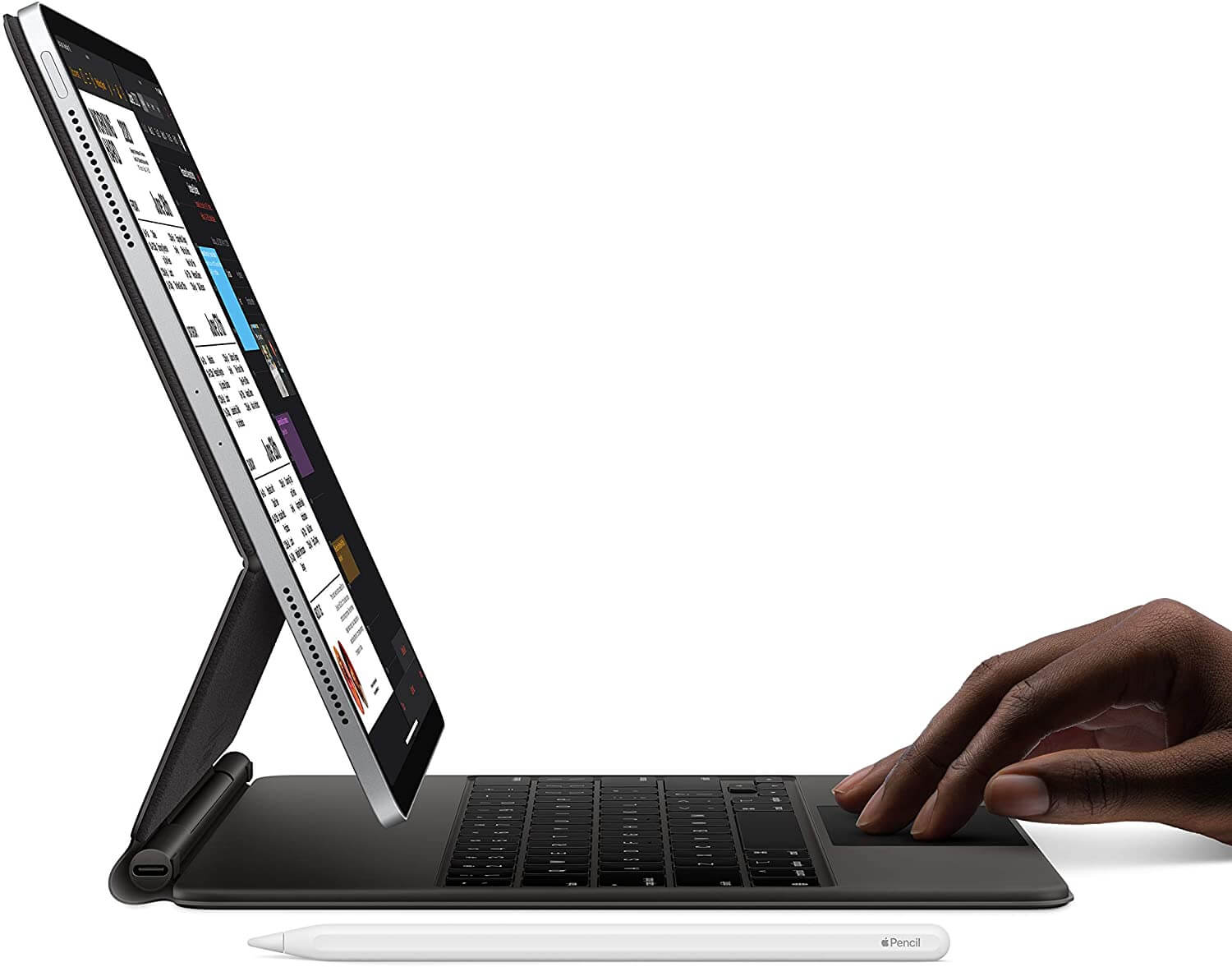 The iPad 8th Gen is Best for Casual Users

If you’re mainly a browser, streamer or social media addict, then the iPad 8th Gen is the one for you. In fact, it’s the smart choice for pretty much everyone, outside of those with very highest demands on their tech. Chances are that most owners don’t even get close to stretching the iPad, and it’ll happily cope with your daily demands.

The processing boost proves that it's no slouch, and while the Pro’s display does colors more justice, you won’t have any complaints in isolation. The iPad’s Retina display is still sufficiently gorgeous that your Netflix binges will look superb.

Throw in the iPad’s decent-to-great specs, plus its reasonable price tag, and you’ve got yourself a heck of a tablet that will last you a long time.

Tempted by an iPad Mini or Air? See our full guide – Which iPad Should You Buy

If you’re a creative type, then the 12.9-inch 4th Gen Pro makes the most sense for you. Firstly, it has that bigger screen, making is easier to get perspective on your work as well as comfortably work on detail. You’ll also appreciate the new range of color reproduction.

The A12Z processor means you’ll be able to do some serious video and image editing, without the iPad breaking into a sweat or slowing you down.

The USB-C port is also a boon for artists, as it allows you to directly plug in a device like a digital camera to your Pro and export photos as soon as you’ve snapped them. It can also plug directly into a large display.

The Pro also boasts improved cameras over the regular iPad, with a 12Mp camera and ability to shoot in 4K.

Need something more than a tablet? See our guide to the Best Laptops for Designers

The iPad Pro (11-inch) is Best for Business

For most office workers, carrying the 12.9-inch Pro between meetings might not be ideal. However, the 11-inch is deceptively diminutive, while still managing to offer up a decent size screen.

That A12Z processor means that no matter what applications you’re using for work, you won’t cause your iPad to burst into flames, and it’ll handle the most graphically intense presentation that you can muster with ease.

It’s also a handy tool for business meetings online, with the front facing camera producing a Full HD image, and the four speakers (compared to the iPad’s two) helping pick out the voices of your meeting pals loudly and clearly.

Then there’s the Apple Pencil 2, which does feel like an integral part of the Pro experience. It’s an excellent tool for making notes or sketching ideas quickly, while the clever magnetic hold and charge solution that Apple has hit upon makes it even more compelling.

Another peripheral worth mentioning for business users is Apple’s folio keyboard, which is the perfect companion for the 11-inch model and will make typing those reports a lot more comfortable and enjoyable than doing it on the screen. It also frees the display of the virtual keyboard, so your view won’t be obscured while you work.

For more information, read our guide to the best tablets for business.

The 7th Gen iPad is no longer best for anyone

Confusingly, you may come across another model of 10.2-inch iPad – the 7th Gen standard iPad model. Our advice? Don't buy it.

The 7th Gen iPad has now been superseded by the 8th Gen model. It's been dropped from the Apple site, but many retailers are still stocking it, and it's only truly worth picking up if you can find it for a massively reduced rate. Otherwise, it's a poor value choice compared to the higher powered iPad 8th Gen, and it's nowhere near an iPad Pro.

If you find it at an utterly bargain price, you'll still be buying a perfectly respectable tablet in the iPad 7th Gen. But, for the sake of future-proofing your purchase, avoid the discount and make the smart-money buy of the iPad 8th Gen.

Verdict: Which iPad Should you Buy?

Like we said at the top of the page, knowing which iPad to buy depends entirely on knowing what you’ll be using it for. Hopefully, you’re now somewhat clearer on what that is.

To summarize, if you’re a typical user – and that’s most of us – the iPad 8th Gen will do all you want, and more. Don’t feel like you’re compromising either, in not picking up the premium Pro – the iPad packs a punch in its own right, not to mention boasting a highly detailed screen and a slim design.

If you’re a designer, artist, or simply have high demands from your tablet, plump for the Pro. It’s packed to the gills with processing power that puts many laptops to shame. You won’t be left wanting, and the A12x processor is ideal for image/video editing and general graphically intense work.