A VPN which emphasizes security, Encrypt.me is a fairly unimpressive solution for those looking to protect their data online, thanks to slow speeds and feature inconsistencies.

It’s billed as being the super-simple VPN, and it pretty much lives up to the claim. You can try it free for 14 days and you don’t have to tie yourself into an annual or even monthly plan.

Instead, you can choose between monthly and annual subscriptions or passes that let you use the service for a week, a month or a year.

Encrypt.me is far from the best VPN out there, but the good news is that there are plenty of better alternatives that are cheaper, faster and don't have the downsides of Encrypt.me.

For a clearer understanding of exactly where Encrypt.me falls in regards to other VPN services, take a look at this helpful table. Once you see the competition, you'll notice that you're better off checking out a different VPN:

For more detail, take a look at our list of the best VPNs of 2021, including PureVPN, IPVanish, Torguard and many others.

There are a couple of positives with Encrypt.me VPN, though these don't go far enough to outweigh its drawbacks.

The PC app is basic, but effective, and does a solid job of encrypting your traffic, preventing telltale DNS request leaks that can give away your location, and disguising your IP address.

While Encrypt.Me doesn’t have the largest or widest network of servers, it has a good presence in the US and a decent selection in Europe.

Encrypt Me: The Not-So Good

A few negatives prevent Encrypt.me from being one of the best VPNs we've tested.

While you should be able to pick servers from a list on the PC app’s main screen, this doesn’t actually seem to change the location you connect to.

Instead, it’s better to go to the Transport section of the Settings screen and select a new location from there – this isn’t particularly intuitive.

The app seems very basic, and while Encrypt.Me says that it has a built-in, non-optional Killswitch, connections don’t stop and apps don’t close when you disconnect the VPN. This could, potentially, give the game away, revealing your true server location – it's only an issue for the most privacy conscious of users, but one to be aware of.

In our tests, Encrypt.Me failed to unblock US video streaming services and websites, including Netflix and Comedy Central, so it’s no use if you want to catch up with TV stateside while you’re travelling abroad. See our roundup of the best VPNs for accessing Netflix to choose a service that won't let you down.

Finally, Encrypt.Me does keep logs that could be used to track your activities, though these are only kept for a specified period and not supplied to a third-party unless legally required. This, and no support for Peer-to-Peer applications, should put any file-sharing fans off the service. 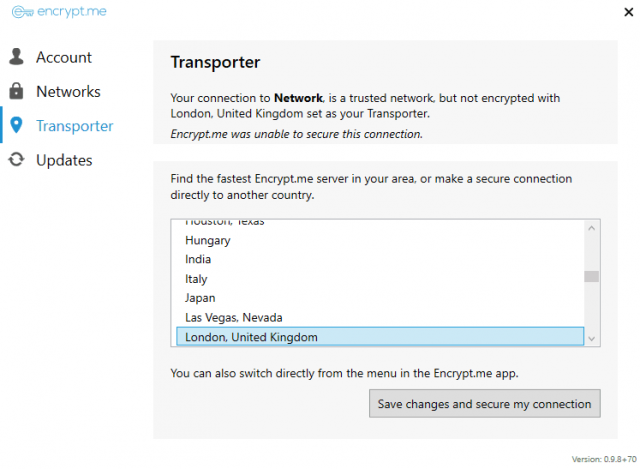 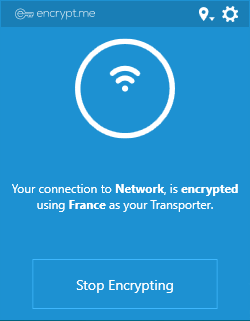 Whether you buy a subscription or a pass, you’re looking at $9.99 a month or $99.99 a year, which makes the distinction seem pretty pointless unless you’re getting the cut-price $3.99 week pass.

You can use an unlimited number of devices on one plan, but that plan covers only one user. If you want your whole family covered, you’re expected to pay up for a $12.99 per month/$99.99 a year family plan, which covers five members of the family across all their devices.

A good VPN will keep you secure online

Have you already got a VPN?

Getting started with Encrypt.Me

It’s very easy to sign-up to Encrypt.Me, and you don’t even need to enter any credit card details to get started with a 14-day trial. Just enter your email address and a password and you’re sent a validation link by email. This contains links with instructions to download the mobile apps plus links to download the MacOS and Windows apps.

Once you’ve downloaded and installed you just enter the log-in details you provided earlier, and you’re good to go.

The app is incredibly simple. Click the big Encrypt Me button and it connects you to the nearest, fastest server, or you can choose a different location by clicking the settings icon in the top-right. 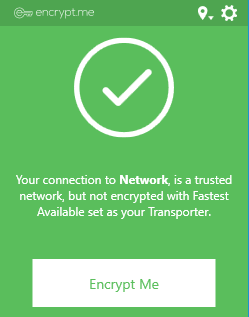 Encrypt.Me is a simple, friendly VPN, but it’s not the most fully-featured option or the best all-rounder. It’s reasonable value if you only care about beefing up security when you connect to public Wi-Fi, but other VPNs do a whole lot more.