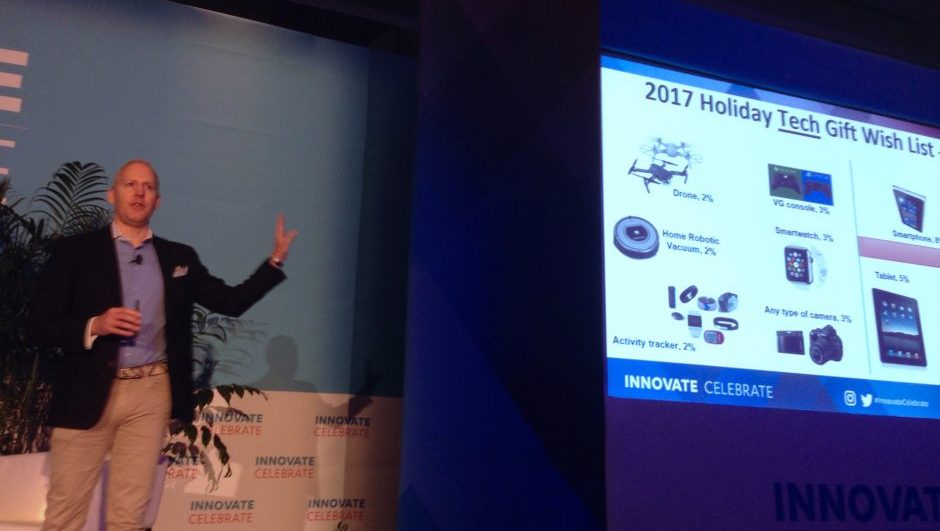 In one of the Innovate Celebrate 2017 conference's most anticipated talks, the Consumer Technology Association (CTA) has today announced the 24th Annual Holiday Tech Trends for the upcoming season. As always, the consumer fervor behind the gift-giving frenzy stretching from the start of Thanksgiving until New Year's Day offers analysts a window into the workings of a multi-billion-dollar market.

As always, you can follow along with TechCo's video coverage of the event at the embedded player below, but if you'd just like to grab a look at the fascinating stats and trends highlighted in the 30-minute talk, just keep reading.

Steve Koenig, Senior Director of Market Research at CTA, anchored half of the fast-paced talk, while Lesley Rohrbaugh, Senior Manager for CTA Market Research, covered the rest. One of the biggest differences Steve mentioned first? The improved shipping options: More are available, and same day delivery is on the rise.

“About 35 percent of tech shoppers plan to take advantage of this,” Steve said of the same day shipping process.

Another change to expect: A focus on personas, driven by retail companies' investments in big data and AI that allows them to create personas for each shopper.

68 percent of adults polled plan to give tech gifts. That's the same percentile as was predicted in 2016, and ranks as the highest percentile achieved in the 24 years of this survey. In other words, tech has never been more important to holiday shoppers than it is in 2017.

Adults will spend, on average, $478 per person this year.

33 Percent Are Spending Less Due to Political Climate

Voice-interface AI home gadgets like Alexa, Siri, or OK Google are expected to continue their rise in recognition as a shopping channel.

“We are expecting voice to come into play this holiday in an interesting way,” Steve notes.

Ten years ago, Black Friday was a day. Five years ago, it was more like a week. Now, the trend is predicted to continue, adding up to an entire month of deals.

“About five years ago, we started to see Black Friday creep into thanksgiving week,” Steve explains, adding that, “these days we think that Black Friday will expand to the entire month.” He cited Alibaba's “Singles Day” as a potential shopping holiday, along with a potential for multiple Amazon Prime days.

“We think it's more about Cyber November than just that one shopping day,” Lesley sums up.

Interest in purchasing and receiving drones is way up this year: The devices are at 15 percent, up from just 9 percent in 2016, and the volume forecast for all sizes of drones is up 31 percent overall since last year.

The impact of word of mouth up 11 percent since last year, and remains a major factor in consumer decision making. Also new this year is a stronger emphasis on gift curation — whether by price point or influencer endorsement, people are looking for a specific reason to narrow down their array of options. 34 percent plan to start their shopping in November.

According to Gap intelligence research, stores are stocking up on 4K ultra HD TVs, so expect them to be hot items. Other areas of interest include video players, audio headsets, and gaming devices. Interest in smart home technologies has almost doubled since last year.