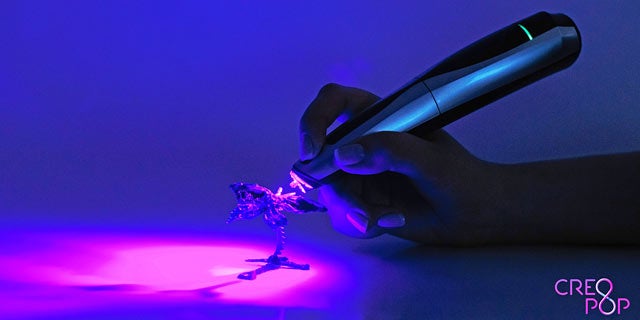 CreoPop, a 3D pen with cool ink, today announced that the company has raised a financing round led by Silicon Valley based 500 Startups. Imagine being able to draw anything you want in 3D?! The possibilities for artists to draw their vision in 3D, and even kids will be able to more creative in class.

The CreoPop 3D pen uses light-sensitive ink called photopolymers. While this has previously been used for professional applications within the 3D printing industry, CreoPop is the first application of the technology in a portable consumer device. When CreoPop is operated, the ink is immediately solidified by LED diodes surrounding the nozzle of the pen. This is in contrast to other 3D pens that typically rely on heating ABS and PLA plastic to temperatures of around 250 degrees Celsius / 480 degrees Fahrenheit. Since no heating is required, CreoPop is safe in a home environment with children and pets around.

The amount of the funding was not disclosed but in addition to 500 Startups it included Singapore-based venture capital firm Ruvento participated in the round together with a number of private co-investors.

“Of the 40 successful exits we've had so far, one was the 3D printing company Makerbot, which was acquired by Stratasys for USD 400 million,” said Khailee Ng, Managing Partner of 500 Startups. “We strongly believe in the 3D printing sector. CreoPop specifically will not only bring this game changing technology to wider commercial applications, but also into households. I grew up using LEGO blocks to make 3D objects. This generation will grow-up using CreoPop.”

The most innovative feature of CreoPop is the large selection of cool inks available including different colors, elastic ink, magnetic ink, glow-in-the-dark ink, temperature sensitive ink and body paint ink. The price for the pen starts at US $110.

“With its innovative and affordable multi-material, multi-color 3D printing solutions, CreoPop is about to disrupt the 3D printing industry,” said Gene Berger, Managing Partner at Ruvento. “We are impressed with what CreoPop has achieved with its 3D pen and we look forward to seeing a series of new products from the company.”

Additionally, CreoPop has been selected as a finalist in the Innovative World Technologies Category for the 7th Annual SXSW Accelerator competition.

“It is a great honor for CreoPop to have been selected as a finalist for the SXSW Accelerator Awards,” said Andreas Birnik, CEO of CreoPop. “We join the ranks of some of the world's most successful technology companies and we are also proud to place Singapore on the global technology start-up map.”