The Olympics are without a doubt the largest sporting event in the world. Between the dozens of sports, the thousands of athletes, and the millions of fans, this three-week athletic spectacle brings people together to cheer on their home nation on the grandest stage of them all. And with the happy marriage between sports and technology, the Olympics makes for the perfect venue to test out some of the world's newest sports tech. From wearables to artificial intelligence programs, there is no shortage of information flying around in regards to athletes and their respective events. But what is all this data being used for?

It turns out, a lot of stuff! Whether it be the top speed of the US sailing team or the strike location of an Egyptian fencer, technology is behind every jersey, uniform, and team manager at the games. Technology has even been utilized to build bikes and test wind tunnels so that cyclists can go faster than ever. The integration of technology has in fact increased cyclists speeds by 10 percentf in this year's games. That is no small feat.

But what are they doing with all this information? Some teams are using data to better their strategy on the field, in the court, or in the water. Some athletes use it to personally hone their skills. But what is the Olympic committee doing to change the way the games are played? As far as we know, very little. With all the data coming in, it can be a bit overwhelming. And honestly, they just don't know what to do with it all at this point.

“The world of sport is now starting to swim in data,” said Barbara Kendall, former Olympic athlete and current member of the board of directors at Arria NLG, in an interview with Tech.Co. “Whether it be from statistics of the athletes results, speeds, distances, and strengths or real time game information from scores to percentages of possession, passes, assists, goals, the list goes on. This data requires experts in each sport to analyze, then report it back.”

As technology advances, the odds that it will exceed our ability to understand it will grow. Between artificial intelligence and machine learning programs, information is easy to come by, but difficult to analyze. However, as time moves on, the scales will hopefully tip in favor of comprehensive data sets. But until then, let's just sit back an enjoy three-way ties for second place in the 100m butterfly. 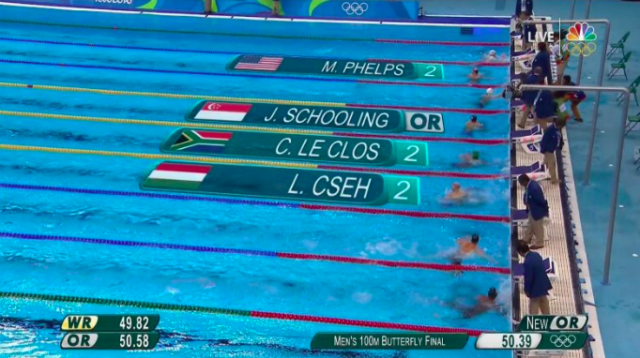