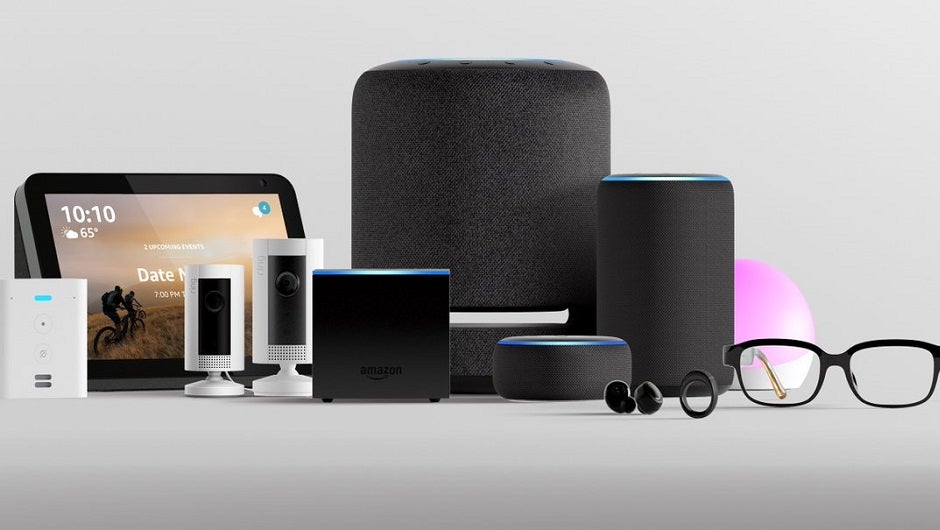 Amazon debuted a host of new devices, services, and product updates today, at a Seattle event devoted to its own hardware. Among the biggest reveals: the studio-quality Echo Studio speaker for $199, the new Echo Show 8 for $129, and new AirPod-style Echo Buds for $129 a pair.

A few very futuristic and buzzy products were also announced, including Echo Frames, Amazon's Alexa-powered glasses frames, and Echo Loop, a smart ring. However, they'll only be available by invitation, so don't get too excited. Here's everything to know about the new announcements, from specs and prices to release dates. 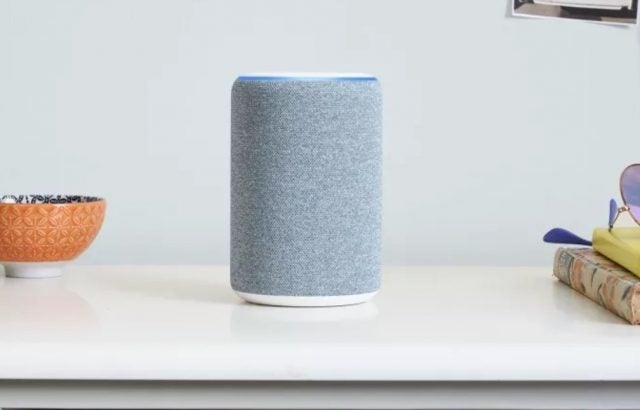 First up is the basic Echo model, which is getting an update. There's not a lot to say about it, other than the price is staying at $99.99, but with two new features. There's an updated fabric design with colors of Twilight Blue, Charcoal, Heather Grey, and Sandstone, as well as improved sound, thanks to a 3-inch woofer and increased back volume. 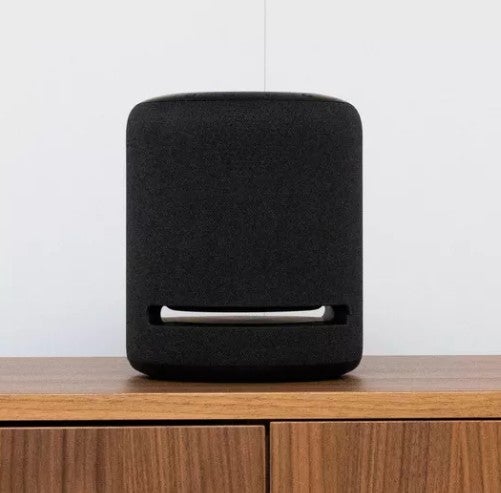 The Echo Studio speaker is bigger and better, designed as a high-end version of the Echo. It comes with five directional speakers that Amazon says deliver an “immersive” sound, along with the built-in smart home hub that users expect from an Echo device.

The Echo Studio is already available for pre-order, and priced at $199. 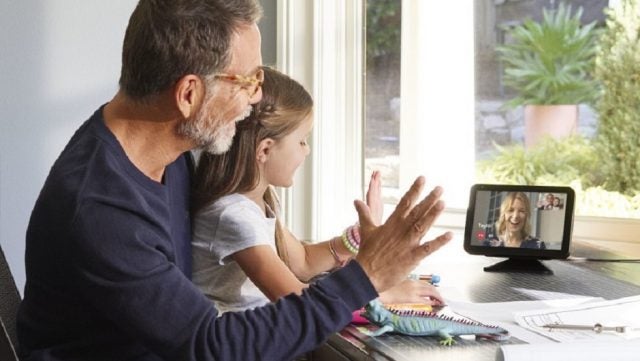 The new Echo Show 8 was revealed with a smart display and an 8-inch touchscreen – its biggest yet – plus better speakers than ever. The device is in essence a tablet, with video streaming, video call, internet and other features you would expect. It costs $129, with pre-orders, once again, already open. 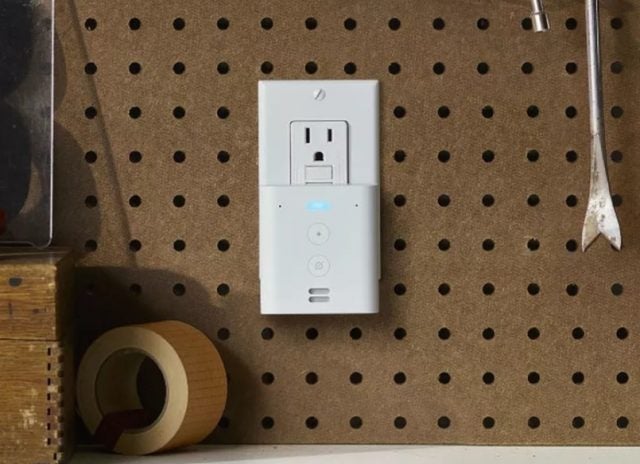 The affordable plug-in smart speaker Echo Flex costs just $24.99. It plugs into a standard electrical outlet, uses Alexa, and offers a USB port for phone charging or powering an accessory like a Smart Night Light. 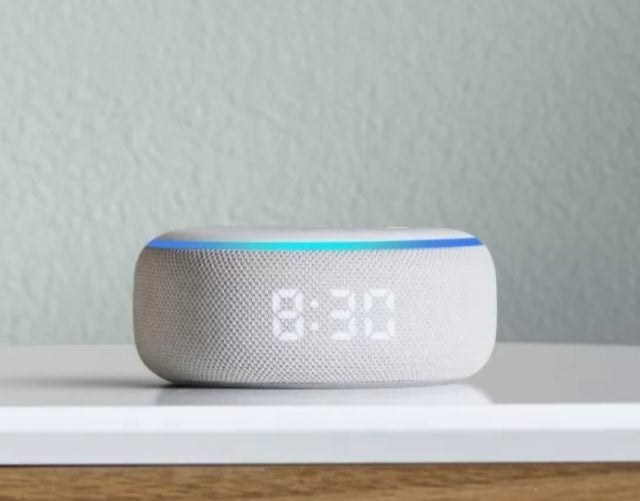 The new Echo Dot now includes a simple LED display. The display auto-adjusts to room brightness so it's always easy to read, and can function as a clock, timer, and snooze-able alarm. It can also be set to show the temperature outside.

It costs $59.99, and stands as an obvious (but pretty appealing) attempt by Amazon to infiltrate your nightstand.

The Echo Buds is an AirPods alternative so blatant that Amazon isn't even trying to disguise it. If wireless earbuds aren't the future, it will be despite the best efforts of the biggest tech companies in the world.

The Echo Buds look a little like the tops of tiny Echo speakers stuffed into each of your ears: Black, the rounded buds nestle in, and of course come equipped with Alexa, as well as Bose noise reduction. Double-tapping will turn the noise reduction on or off, while a single, long tap will turn on your favored voice assistant software, whether Google Assistant or Siri.

They come with three sizes of ear tips, and wing tips to better fit your ears. They can play music for 5 hours on one charge, and for 15 hours with the charging case. They'll cost $129.99 for a pair, notable cheaper than Apple's $199 devices, and pre-orders are open today, ahead of the holiday season.

Amazon also debuted a couple of products so innovative that they're calling them “day 1 editions,” which are future-gazing devices that Amazon will be rolling out to a select few.

They're currently only open by invitation, so good luck getting your hands on them. Anyone who buys them will “have the opportunity to contribute valuable feedback” to Amazon about their experience.

Smart specs! 👓 Echo Frames let you use @alexa99 on the go and keep your hands, ears, and eyes free. https://t.co/ugT22XhFIn pic.twitter.com/aku0fCuwbV

Amazon might have finally cracked the wearable glasses tech problem that sank Google Glass. The solution is to not include any display or camera elements at all.

Echo Frames are prescription-ready, all-day glasses that have Alexa built into them. Nothing goes inside your ear, but you'll be able to hear the audio thanks to “four beamforming micro speakers” that will direct the sound towards your ears so specifically that no one around you should be able to hear it.

There's a catch: The frames are pretty chunky. On top of this, the Echo Frames are only compatible with Android phones. They'll cost $179.99 but, again, are only available by invitation.

Next up: the Echo Loop, an Alexa-enabled smart ring. It comes with a clickable action button that allows you to access Alexa when needed, and can be double-clicked to start a quick phone call with a specific contact who you'll have to set ahead of time. Honestly, it sounds a little limited, but I guess that's to be expected from a smart ring.

The Loop comes with the smallest ever speaker on an Echo device, two microphones, and a haptic feature that buzzes just slightly when sending notifications. It's water resistant, though not waterproof, and lasts a full day on a single 90-minute charge. It comes with a black titanium finish, and costs $129.99, if you have the invitation to buy it.

On top of all the Echos and futuristic devices above, Amazon plans to release a few more smart home products, that are designed to make typical household chores a little easier, with a healthy dose of Alexa. 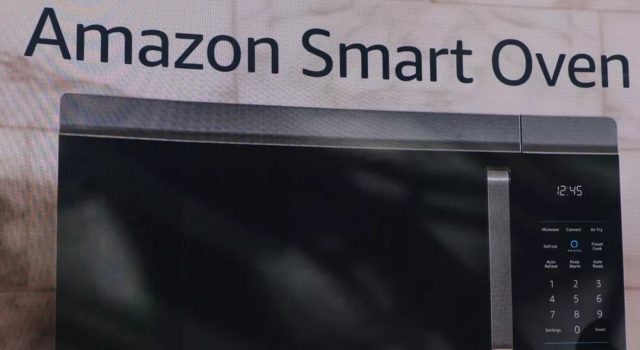 Yup, it's a a combination convection oven, microwave, air fryer, and food warmer, and it comes with Alexa, which can be told to preheat the oven, start or stop cooking, and send notifications when the oven is preheated or the dish is ready. It costs $249.99, and they'll throw in an Echo Dot as well.

I'm calling it now: Moving forward, every article about the sexism baked into voice assistants is going to mention this device. 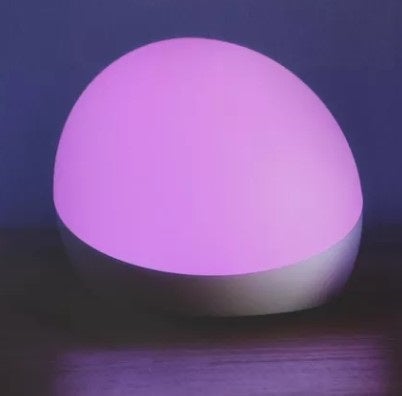 This multi-color smart lamp offers a variety of Alexa-powered light options: It can mimic a flickering campfire, gradually dim on a set timer, start up a music party with a light show, or just toggle through a series of rainbow colors.

It costs $29.99, filling out Amazon's inexpensive Alexa-enabled product side. 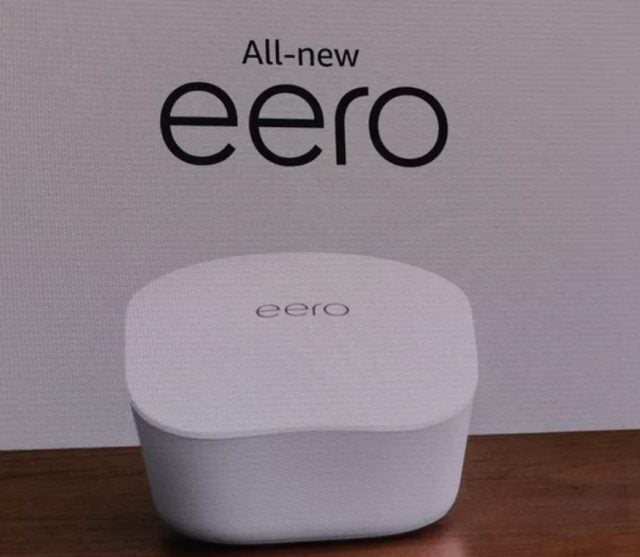 The new eero mesh WiFi system is here to replace your router, and offer simple and easy WiFi coverage across your entire house. It offers three types of WiFi: WiFi for gaming, streaming video, or just working online. Each option costs $99, or you can get all three for $249.

What can we learn from this event? Mostly just that Amazon's plan for the future of its product line is clear: It wants to get the Alexa voice assistant anywhere it possibly can.

The Echo devices and updates that debuted today make Alexa more appealing as a way to streamline your life, from your bedside table to all your speakers and even smart earbuds, glasses and rings – devices designed to be totally invisible while offering access to Alexa at all times.

With low prices across the board, Amazon is well positioned to accomplish its goal.