In recent years, Apple’s events can be almost boringly predictable. We’ll get a new device that is incomprehensibly faster, lighter, smaller and better in every possible way than the one it replaces.

There will be clapping, whooping and hollering after every mention of the merest statistical improvement. There will be slick videos and guest presenters to tell you how their apps would never work on any other phone.

It’s very easy to feel cynical about Apple’s product launches, especially as recent events have been more about evolution than revolution. But this one was different.

Apple Returns to its Roots

One of Apple’s key design traits throughout its history has been the removal of buttons and complications. Why do things the old-fashioned way, when you can do them the Apple way?

With the new iPhone XS and XR, Apple has removed the home button that has featured on every single iPhone (minus last year’s X) since its inception.

Taking things away in the name of progress often sounds counterintuitive. However, Apple has removed complications to streamline its product experience and maximize the visual interaction with all its devices. This is why Apple constantly puts so much emphasis on the quality of the screen displays (from the iPhone to the Mac), the design continuity between every asset in its software and the quality of its overall brand presentation.

Frankly, it’s a wonder that Apple has steadfastly stuck with the home button for so long. But now, it can perhaps start to move forward into a new age of smartphone design, away from the tired designs of the 8 and 8 Plus – which are still barely distinguishable from the four-year-old 6 and 6 Plus. 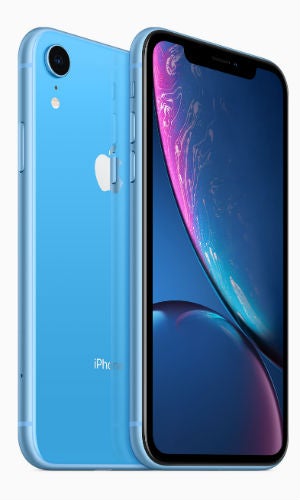 Of course, at $750, the new iPhone XR is far from the last word in affordability. However, this makes it cheaper than the iPhone 8 Plus, and only $50 more expensive than the 8, back when those models launched.

Given the increase in the quality of the screen, processor, and camera, this hardly seems like the greatest price hike in history.

It also brings some color back to the iPhone lineup. The last iPhone with such a wide range of colors adorning its case was the 5C, which was one of Apple’s most popular iPhones. The XR should be a sales hit.

While the XR is the cheapest iPhone in this generation, it’s far from low-tech. In fact, the only way it only loses out to the XS and XS Max models is with its single camera and lower resolution (but still stunning) LCD screen.

You get the same super-powerful A12 Bionic processor, the same bokeh and depth of field effects despite the single camera and you get the same augmented reality (AR) tech.

When Apple told everyone that it didn’t care for VR, instead believing that AR was going to be the next big thing, people scoffed.

However, the AR applications shown off in the Steve Jobs Theatre show the immense potential of the tech. We saw Homecourt, a basketball app which tracks and analyses shots in the real world without any sensors on the player, ball or court.

We saw new features in Safari that allow users to take a 3D image and display it in AR in the world around them – the demonstration featured a coffee machine being placed on a kitchen counter. And, naturally we saw improved Animoji.

The fact that this tech is available in your pocket is, genuinely, remarkable. And, it’s actually useful. Apple’s commitment to AR has moved it beyond a gimmick – something that, at the moment, looks impossible to achieve with VR tech.

Artificial intelligence is one of the biggest buzzwords in the world of tech at the moment due to its potential for good or bad. Again though, Apple demonstrated that it was taking AI tech further than most of its competitors.

The new A12 chip powering the AI will likely be the most powerful mobile CPU and GPU in the world. But, the new Neural Engine is the real star of the show.

The Neural Engine made its debut last year on the iPhone X as part of the A11 chip. But it’s been improved and refined by Apple. The A12’s new Neural Engine has 8 cores, compared to the A11’s two and is able to analyse data on the fly to work out whether processes need to be run on the CPU, GPU or in the Neural Engine itself.

This sounds complicated, inconsequential and just a bit too techy, but it allows the A12 to work faster and more efficiently giving you better performance for longer.

In practice, the A11’s Neural Engine could handle 600 billion operations per second. The A12 can handle 5 trillion. This means everything will be faster, slicker and smarter.

Apple is big about the environment. It runs on 100% renewable energy, for example.

Lisa Jackson, Apple’s Vice President of Environment, Policy and Social Initiatives, delivered a section exclusively about the company’s commitment to environmental issues. In her presentation she detailed the solar panels and biofuels than power the Apple campus, its stores and its data centres – all very noble and admirable successes.

However, she also announced a new environmental goal “to eliminate our need to mine new materials from the Earth”. This is no small undertaking and there was no date given for this goal to be achieved, which is understandable.

Jackson did detail the ways in which Apple is going to make this happen. The company is going to use responsibly-sourced recycled or renewable materials wherever possible. Apple is also going to ensure its products will last longer, from the hardware to the software and, once the products have come to the end of their lives, they will be totally recycled or reused by Apple.

That change has started now. The logic board on each of the three new iPhone models is made entirely from recycled tin. This change, according to Jackson will, on its own, prevent the need to mine 10,000 tonnes of tin ore annually. And, don’t forget that once mined, that tin needs to be shipped around the world for manufacturing, further minimising environmental impact. The speaker enclosure and cover glass frame on the iPhone XS are made from 35 and 32% recycled or bio-plastics.

Of course, there’s still much that could be done to reduce Apple’s global environmental footprint, but this is a good start and it’s refreshing to see the company challenging itself with lofty environmental goals. The company, and the electricals industry as a whole can and should be doing more to improve their social responsibility as well, from the mining of rare earth minerals – notably cobalt – for use in smartphones, to the infamous Foxconn suicide factories in China. But hopefully that will come next year.

There's a New iPhone – So What?

Why does this matter? You might be thinking that it doesn’t. But Apple, regardless of whether it is the first to introduce a new feature, or creating an entirely new market (as it effectively did with smartphones) often sets the pace for all other technology companies.

It wasn’t the first to introduce a smartphone, or even a touchscreen smartphone. But, once the iPhone arrived, it was game over for keyboards. Numerous companies beat it to smartwatches, but now, the Apple Watch is the best-selling watch in the world.

Apple’s commitment to AR, AI and a new sub-flagship model will surely be emulated by other companies. Its commitment to environmental concerns will both attract praise, and will be a lighting-rod for Apple naysayers and sceptics, but we will likely see Google, Samsung and more announcing new initiatives to reduce their environmental impact.

We will, also, see smartphones change again. Buttons have had their day, and any smartphone featuring buttons will suddenly look very outdated. Oh, and the headphone jack will never be returning, sorry everyone.

Tempted by the iPhone XS? Check out our full iPhone XS review to learn if it's the best phone for you