Welcome to the morning after the night before, with the dust settling from the latest Apple iPhone event. We’ve seen a few of these now, though the excitement and fever pitch from media and consumers alike isn't always reflected by the products announced.

However, it’s the Apple Watch, now on its fourth iteration, which could point to a potential new consumer base for Apple, and it’s probably not the one you’re thinking of. Rather than trendy young gym-goers and busy execs checking messages on their wrists in board meetings, Apple has its eyes set on an increasingly elderly market.

Sales of the iPhone are in decline. Whether its market saturation or customer fatigue, Apple isn’t shifting as many as it used to. Before you turn to Kickstarter for Tim Cook and co, don’t panic, they’re still selling plenty of them. In Q2 2018, it sold 44.7 million iPhones worldwide, and the phone division of Apple amounts to over 50% of its profits. It recently became the first US company to reach $1 trillion in stock market value. So don’t worry, Apple's doing fine.

However, how long Apple can sustain the annual rinse-and-repeat of new phone announcements to fanfare remains to be seen, especially given high price tag of the new batch (the flagship XS Max starts at $1,099 – not a typo).

With the Apple Watch starting at comparatively cheap $399, and effectively acting as an iPhone accessory, there’s a market there for keeping customers engaged in the Apple infrastructure and selling them a brand new product. The Apple Watch is a whole other revenue stream for the company to explore. And who is it aimed at? Well, realistically, anyone who’ll buy it. Oh, and here's a fun fact for you: Apple is now the world's biggest watch manufacturer, outselling the likes of Rolex, Omega and Swatch.

The Ultimate Gadget for Everyone 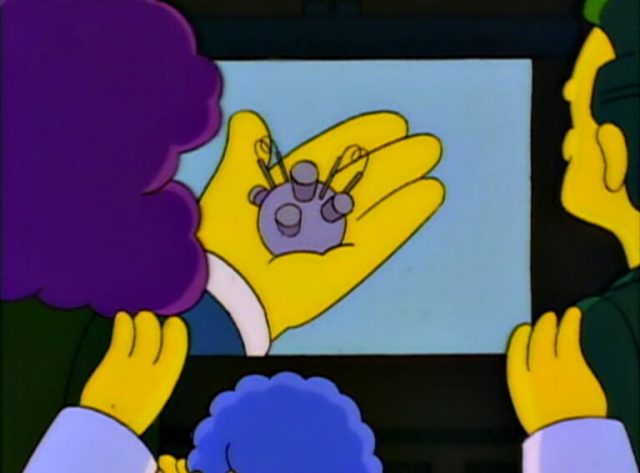 There’s a scene in The Simpsons episode ‘Homer vs Patty and Selma’, where Homer finds himself dreaming of inventing the ultimate gadget. At a board meeting, he is congratulated by a cabal of men in suits, one of whom states, ‘Every person in America owns one of these – in many cases, two or three!’

With the Apple Watch, Apple feels like it's reaching for the level of market penetration of Homer’s mystery device. By making its appeal as universal as possible, it’s marketing the Watch at everyone.

Fitness fanatic? Use the fitness features to stay trim. Older generation? Use the health apps to monitor your wellbeing. Lazy? Answer phone calls on your wrist without having to get your phone out of your pocket and use the app that reminds you to breathe once in a while. Well, maybe that’s a bit harsh, but you get the idea.

The truth is, though, that Apple already has a finger in most of these pies, but it’s the older demographic where they’re struggling, as are most tech manufacturers. If you’re in the 65+ age group, there’s only a 46% chance you’ll have a smartphone.

Compare that to 18 – 29 year olds, where it’s 94%. Smartwatch stats are even more dire. Could Apple be positioning itself to be the de facto gadget for those in their later years?

The Apple Watch selling well by the standards of wearable tech. But, there’s one market where it’s struggling to get a hold – and it's a lucrative one.

Research has shown that older generations aren’t too bothered about smartwatches. In one survey, those aged over 65+ made up just 4.6% of the market. This is a problem for Apple, given the amount of disposable income that those of retirement age have access to.

Anyone with an older relative who is still rocking a ten-year-old Nokia might not be too surprised by this figure. But, it does show that so far, smartwatches just haven’t proven compelling enough for older generations.

This could be why Apple went out of its way to mention the health benefits of the Series 4 in its conference. Yes, of course it was always going to talk about this to some degree, but perhaps the most surprising element that was mentioned was the ability for the gyroscope to detect falls. Now, we all fall from time to time, and the humble stumble is actually one of the main causes of injury worldwide.

The Apple Watch will detect your fall. But, if you haven’t moved after a minute, it will also alert the authorities and your loved ones.

Apple's own adverts tell how they want to be universal

Apple isn’t aiming this feature at people coming home from the bar after a few too many beers. This is clearly aimed at older consumers who are more vulnerable. There’s an entire product market built around this exact scenario, and if the elderly don’t buy into this feature themselves, its not hard to imagine concerned family gifting them an Apple Watch instead. If they don't have an iPhone, then they'll probably get them one of those too, natch. A double-win for Apple.

Throw in the improved health monitoring, including an ECG app that monitors heart health and produces reports that can shared with your doctor, and suddenly the Watch feels very much like a product pitching for a new audience, outside the traditional Lycra-clad gym fanatics.

Not Insulting the Audience

It’s also a product with a relatively cool reputation. Look at any product marketed at older generations, and you’ve entered the Gray-Zone of a 30-year old ad executive's brain. Frankly, it’s a grim place to be, not to mention insulting to its audience.

Older folk don’t recognise the people that are supposed to be portraying them in commercials. Apple, on the other hand, has a young, fresh image that pitches itself at the forefront of technology, while also remaining fun.

Grow up alongside the tech, and it’s an integral part of your day-to-day. However, if it comes along when you’re already in your adulthood, you’re less likely to lean on new technology quite as much. For the big boys of the tech space, this is a temporary problem, one that will slowly decline as future generations are raised with, and by, tech.

Right now though, there’s a potential market that’s crying out to be sold to, and the Apple Watch might just be the non-condescending product to sell.