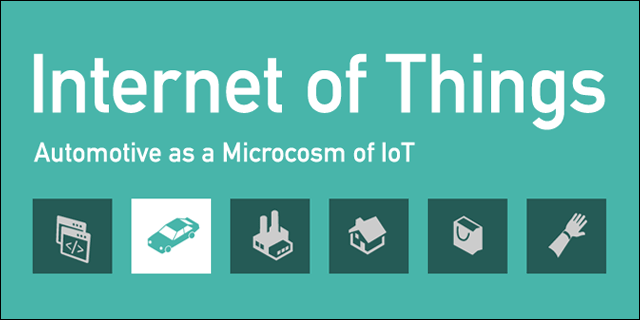 This is a sponsored post by the Application Developers Alliance, and we want to thank them for their support!

When people think about the Internet of Things (IoT) they sometimes forget one of the most important ‘things’ in our lives: the automobile. Even if you don’t drive a car, I can almost guarantee that you interact with a car at least once a day; the car is central to us as humans in many ways.

And now with the added context of the connected car, we’re beginning to see that the automobile isn’t just a central hub for transportation anymore. These days, cars are also adept at the communications aspect of our lives.

In fact, a 2013 forecast by GSMA, a global association of wireless carriers, found that every car will have some sort of connection by 2025. Thus, the market for technology to connect cars and the internet was an estimated $18 billion in 2012, but now it’s expected to increase three times that number over the next four years.

It’s obvious: the car is an ideal ecosystem for the IoT. And developers, who are already being recruited by auto manufacturers and their constituents by the way, want to be on the cutting edge of the new market.

This year the Application Developers Alliance and its Emerging Technology Working Group began identifying five areas – home, automotive, retail, manufacturing and wearbales – influenced by IoT so that they might help developers gain insight into creating a robust IoT ecosystem.

The second whitepaper in the series, “Automotive as a Microcosm of IoT“, features industry leading companies like Intel, Ford, GM, AT&T, AutoTech Council, and more to explore the current state and future of in-vehicle development and best practices, tools and resources for developers. According to the research, these companies already offer their own software development kits (SDK), application protocol interfaces (API), and developer programs. This allows developers to quickly understand the architecture and interface to increase compatibility with the inner workings of the automobile.

The Alliance and its partners also conducted numerous interviews with industry leaders to identify ways to develop apps for vehicles. The following areas were addressed and call for further app development:

“A car that drives itself is 90 percent software and 10 percent hardware,” says Liz Kerton, the Executive Director of the Autotech Council. “We’re about 70 percent software now, so you could say there are many opportunities still out there.”

Standardizing interfaces and reducing the amount of time needed to take a driver's eyes off the road becomes important as vehicles become more connected. And Kerton has made it her express mission to connect entrepreneurs with VCs, auto companies, and suppliers to solve issues like this.

Already users can unlock their cars, check the status of their batteries, find where they parked or remotely activate the climate control system — and this is just the beginning. Click here to read the full report brought to you by the Application Developers Alliance.