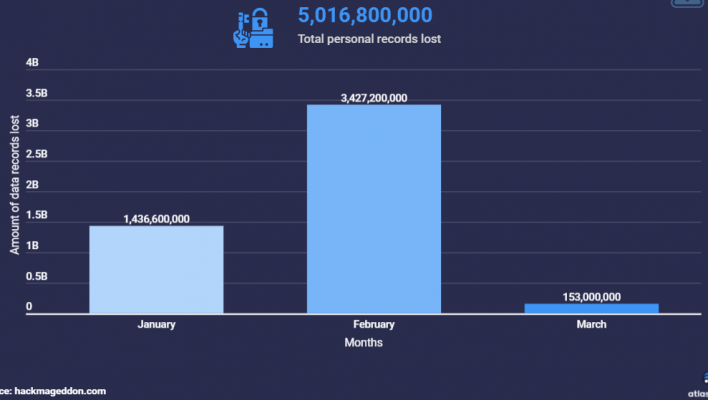 A recent cybercrime report from AtlasVPN has revealed that over 5 billion private records have been leaked from various businesses online in 2021 alone, along with a myriad of other horrifying statistics.

The report comes on the back of a trend of rising cyber attacks over the past year, from phishing scams to ransomware, as more time than ever has been spent online due to the pandemic. Businesses have become especially vulnerable of late, as increased security measures have been slow to follow the increase in remote-workers.

But despite some shocking findings, cybersecurity measures have been improving too, meaning you can still protect your data, if you know how. Here's what to know.

AtlasVPN has released a lengthy report on the biggest cyber threats of 2021 and the statistics are alarming.

While phishing has been on a steady increase since the internet's inception, recent years have seen it hit a monumental high. An astonishing 2.1 million websites on the internet are dedicated to phishing scams, and those are just the ones that Google detected.

Microsoft and Zoom were the most regularly impersonated firms in 2020, with 80% of malicious senders pretending to be one of the two companies.

Millennials and Gen Zers are most likely to fall for phishing emails, suggesting that age does at least bring a little wisdom.

The most common kind of cyber attack by far however, is ransomware, making up an incredible 81% of all financially motivated cyber crime, AtlasVPN found. While the average person might not be too worried about ransomware, the average cost of a ransomware attack is over $4 million – an incredibly costly penalty for not taking cyber security seriously.

The most-hacked states were: California, New York, Texas, Florida, Ohio, Illinois, Missouri, Pennsylvania, Virginia, and Colorado who lost $2.39 billion between them last year, as a result of various sorts of internet crime.

If you think you're safe because you have an Apple computer, think again, because macOS malware development increased by over 1000% in 2020, from around 56,000 detectable threats in 2019 to a breathtaking 674,000. Mac users will need to step up to the plate if they want to protect themselves.

Data leaks have also seen a massive increase. In fact, in 2021 alone, there have been a total of 5 billion records leaked. Billion, with a “B”! Since these are so often done in massive bulk, it's not hard to see how these numbers can get so significant so quickly.

A full read through of the report is recommended, if only to get a sense of how many threats can come from so many different directions.

How to Keep Yourself Secure Online

With so many cyber criminals creeping around, doing everything they can to access your data and information, it's easy to get disheartened. You may even be one of the 55% of Americans “more worried about getting hacked than murdered”. Fortunately, there are means you can undertake to protect your technology and accounts.

Firstly, password managers are a must-have. These can allow you to safely store your passwords for various sites, meaning you won't have to rely on your own memory or a physical list.

Secondly, VPNs are crucial for browsing in this day and age. Whether for your small business or your personal computer/phone/tablet, a VPN can help keep you and your information secure by masking your details from untrustworthy characters.

Finally, simply being aware of suspicious emails or texts can make all the difference. It's one thing to minimize possible damage, but it's another to avoid it all together. Here's a list of some of the more pervasive phishing scams to stay on top of for the moment.

It might seem too good to be true that a couple of inexpensive tools like a password manager and a VPN can stop you from becoming part of these worrying stats on cyber attacks, but it really is a lack of prevention that enables malicious users to act. A few dollars a month on these measures, along with some decent anti-virus software will protect you and your business from the majority of harm. Don't believe us? Can you afford not to?