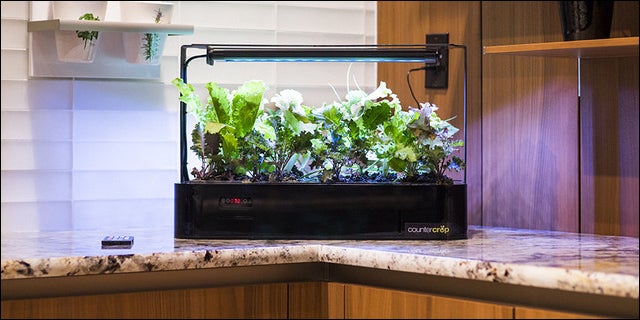 CounterCrop, a San Diego based startup, today launched their Kickstarter campaign and before the work day even came to a close they reached $28,723 of their $75,000 funding goal. This marks the second San Diego startup in as many weeks to take to Kickstarter and crush it their first day out of the gates.

Jack Abbot captained the construction of CounterCrop, via Intelligent Light Source, to be a smart and self-contained indoor home garden. Inspired by estimates saying humanity needs to double their food production in order to keep up with population growth, CounterCrop is helping to move the food production right to where people live.

Part of winning the battle to bring food production close to where people live is the light source: after all, you can’t grow plants without the sun, right? As it turns out, you can. The lights are commercial grade LEDs that use biomimicry to imitate daylight patterns and key spectrums of the sunrise and sunset to keep your plants growing year round.

Another part of the battle is educating users on how to grow plants. Abbot and his team thought of that as well for those of us with any color of thumb besides ‘green’. There’s a pre-programmed remote control that comes with CounterCrop that controls the lights and watering system.

It’s a dynamite idea that seamlessly fuses technology and nature together sprinkled with a side of social good and planet saving. In fact, people like it so much that in the time it’s taken me to write this article the overall funding received went up roughly $400. This is going to be a fun one to watch.

Explore More See all news
close Building a Website? Get 50% off Wix premium plans until May 19th Claim 50% Off