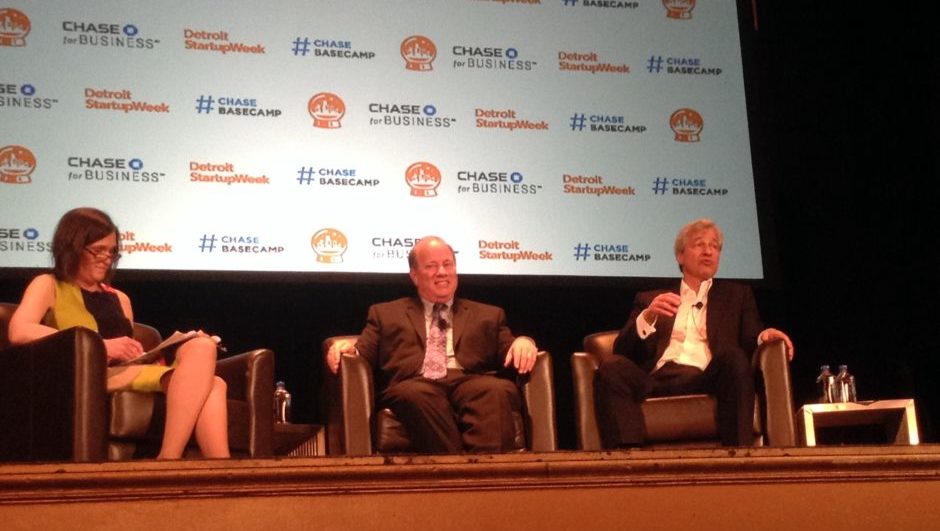 It's no secret that Detroit has fallen on tough times. In 2013, Detroit become the largest city in US history to file for bankruptcy, confirming what the nation already knew: the manufacturing powerhouse's best days were behind it. Fortunately, there has been an impressive focus on growth and recovery that is helping the citizens of Detroit hope again. And with the first ever Detroit Startup Week in full swing, the prospect of a happy future for the Motor City is all the more likely.

This was the topic of discussion during the fireside chat with Mike Duggan, the mayor of Detroit, and Jamie Dimon, chairman and CEO at JPMorgan Chase & Co. They spoke candidly about the recovery progress of the city, their burgeoning partnership that is working to rebuild Detroit and the best ways to grow the Motor City into the gem it once was.

During the fireside chat, three key points focused on how entrepreneurs can contribute to the rebuilding of Detroit. Take a look at them below:

Coincidentally enough, this talk marked the two year anniversary of JPMorgan Chase providing $100 million in funding to the city of Detroit. And while it may be easy for companies to donate and run, JPMorgan Chase has stuck around and made Detroit a key focus in their goal to support burgeoning startup ecosystems. They have been committed to getting to know Detroit in the most intimate and effective ways to invoke real change in the community.

“When Jamie and I first spoke, I didn't have any idea what this was going to be,” said Duggan. “When a New York banker calls you up and you're a mayor that's in bankruptcy, you don't really have high hopes. But it has been a remarkable partnership.”

The key to making things work is remembering that everyone is in this together. Supporting companies means creating jobs. Developing programs breads success. There are millions of tiny little steps that need to be taken together in order to bring Detroit back from the brink. And as Jamie Dimon puts it, Mike Duggan is doing just that:

“When we all work together, things work,” said Dimon.

A city cannot recover without the help of the entire community. And while startup culture has been dominated by the young, white-male stereotype, that demographic is not indicative of the Detroit area. The only way to truly embrace economic recovery is to embrace the people of the city as well.

The key is to give people that grew up in the city a chance to contribute. Not only will they have the knowledge and experience necessary to know what will work and what won't, they will also bring a new perspective to the drab business model that led to the original collapse. JPMorgan Chase's Entrepreneur of Color Fund and the Motor City Match program are excellent examples of minority opportunities that offer them the chance to show how much they care about Detroit in a productive and innovative way.

No one likes admitting to their mistakes. Particularly when that mistake is sending one of the most prolific cities in the country into bankruptcy. But as Mike Duggan puts it, the key to changing the tide is honesty. There is no deceptive tactic, no fake legislation, no seedy secrecy that can help Detroit recover. If you want to truly inspire change, you need to be honest with the population about the problems that exist and the solutions that will lead to recovery.

In Detroit, these efforts have created involvement and excitement for the growth of the city beyond what was previously thought possible. Efforts to knock down and board up dilapidated homes within the city limits, for example, have been aided by citizens offering to help. Board-up parties (events organized by the city to board-up homes that are not scheduled for demolition yet) have created a transparent ecosystem filled with doers and thinkers that want to make Detroit better.

This article is part of a Startup Week content series brought to you by CHASE for BUSINESS. Startup Week is celebration of entrepreneurs in cities around the globe.CHASE for BUSINESS is everything a business needs in one place, from expert advice to valuable products and services. Find business news, stories, insights and expert tips all in one place atChase.com/forbusiness.