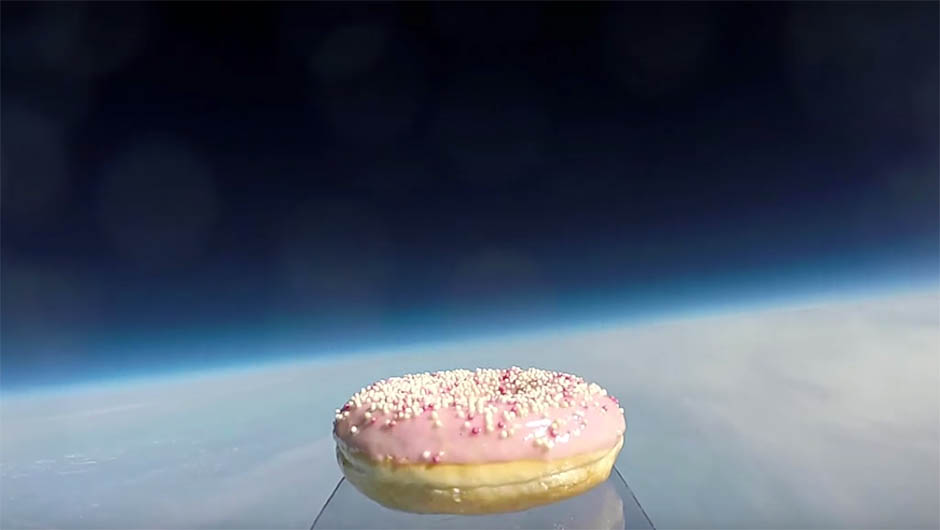 It's Friday afternoon, and if you happen to be on the East Coast, it's probably a lot colder today than it has been the rest of the week – winter once again clawing its way back into our lives. If the colder temperatures weren't enough, a donut has apparently made it into space before you did – so, I mean, now how does your Friday feel?

Earlier this month, Swedish brothers Benjamin and Alexander Jönsson sent what appears to be a strawberry frosted donut to space. Using a balloon (not the kind you get from your party store – sorry, guys), they sent the donut 20 miles into Earth's atmosphere, recorded its journey for shits and giggles, and then brought it back down where the brothers eventually ate said donut.

Yesterday, there was a lot of talk across the Internet about the film adaptation of Andy Weir's The Martian, which stars Matt Damon. Focused on a man sent through space and onto the planet Mars in an attempt to cultivate four years worth of food, the story is something that we of the planet earth want to believe is possible in the next few years. Indeed, from people like Elon Musk and organizations like XPRIZE, to initiatives like the Mars One mission, the goal is to eventually get regular human beings like you and I up into space to kiss the heavens of our galactic creator.

But it seems that no matter the urgency to which we place on space travel for regular human beings, the frosted, fried goods popularized by America's Homer Simpson and television cops have beat us to it. How sad, humanity…how sad.

If you want to watch the Jönsson brothers eat the space-tainted donut, here it is: